Review: Quentin Tarantino's ONCE UPON A TIME IN... HOLLYWOOD 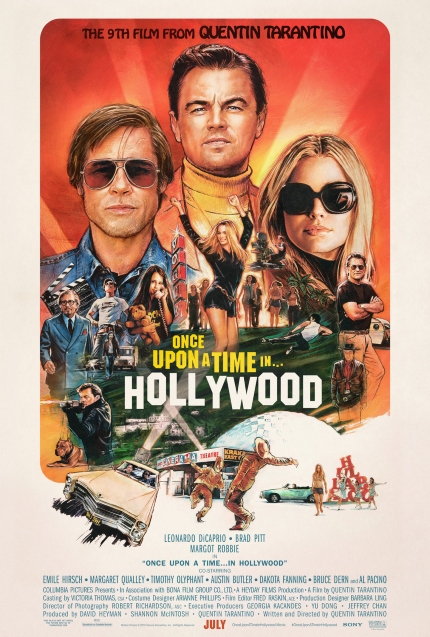 With Quentin Tarantino nearing his 10th and supposedly final film, a wistful sadness is creeping into a filmography that, if nothing else, has triumphantly put the fun in cinema, celebrating the holy medium for better, and far more ecstatically, for worse… depending on who you ask of course.

If you asked the video store clerk of Manhattan Beach’s Video Archives in the mid-late 80s, you’d find a hyper-encyclopedic film enthusiast who’d gladly talk your ear bloody about all walks of cinematic life from the classic Hollywood golden era, to French new wave auteurs, to the junky Hollywood knockoffs cheaply coming out of 60s Italy en masse.

For many Hollywood former A-listers of the late the 60s coming to terms with their falling stars, film industries like the one in Italy offered a place where their good names still held currency. If one was no longer a candidate for James Bond, for example, there were still roles-a-plenty in Spaghetti knockoffs like Sergio Corbucci's (semi-fictionalized) “Operazione Dyn-O-Mite!” This didn’t make it any tougher a pill to swallow for the “has-been”, particularly because in this era, little Quentin, who’d have been six years old at the time in which his latest film takes place, while already actively living and loving in Los Angeles, was ages away from being capable of conveying just how cool these films were to his unlikely future heroes.

Fifty-six year old Tarantino’s 9th film, Once Upon A Time In… Hollywood features such a protagonist facing this very type of unique existential crisis - the kind that could only exist in the city of dreams. Leonardo DiCaprio plays Rick Dalton, former TV star of the hit show "Bounty Killer", which was shot in Spahn’s Ranch in the late 1950s, a time when the fake frontier town thrived as movie set to many fine productions. These days (‘69), an era when the ‘freaks’ invaded California, the ranch is home to the kind of hippy communes that have become commonplace. This was also prior to the term ‘cult’ becoming a household anxiety and headline grabber.

Why does Charlie Manson’s story resonate after so many years for so many people? My own fascination, as someone who long ago read Helter Skelter mouth agape in its entirety, has to do with the shocking fate of a counter-culture deemed ‘the love generation’. It is oft-said that Manson, along with Altamont, destroyed the ethos of its days by demonstrating the consequences of turning the world over to the potheads.

The crimes signalled an end of innocence in California, and where Hollywood was concerned, for Tarantino, the carried-away youth movement seemed to also represent the final nail in the coffin of the old school, as perhaps first hammered-in earlier that year at Cannes by Dennis Hopper’s Easy Rider.

While the Manson crimes continue to be among the most cryptically fascinating events of the free-elove decade, they are hardly at the heart of Tarantino’s tale of a bygone age. With each film in his career, Quentin has offered chapter after chapter of an epic love story dedicated to the undervalued backbone of an industry- nay, a way of life. It has been a career length mission to shine a light on pulp, lending it a vivacious legitimacy that proves that one person’s trash is indeed another’s treasure. It has been done with a passion that has proven to be more than a little contagious.

What is so beautiful - a word we do not often get to attribute to Tarantino films - about Once Upon A Time In… Hollywood, which nods to the historical-fiction masterworks of Sergio Leone, is that Tarantino is taking pause to offer the pure generosity of spirit which he’s lent his fallen angels - from John Travolta to Pam Grier - and now to Rick Dalton - and allowing some for himself.

Much of this self-kindness comes in the form of Dalton’s best friend and ego/id counterpoint, Cliff Booth, played with an adorable calm by Brad Pitt, who reports from the other side of the fame rainbow. Booth is content with his lot in life and secure enough with himself to take on Blake’s emotional load. So in addition to having a spectacular ensemble cast, by hitching the film to the dual star-power of DiCaprio and Pitt, Tarantino is treating us to a double-edged meditation on Hollywood identity. Who knew a film concerning Charles Manson could make for such a delightful buddy picture to boot?

Just as Easy Breezy, the Bronco Billy-like protagonist of the book Rick Dalton reads between shot set-ups - yet another fiction within a fiction - comes to terms with the reality of a gradually aging body giving way to a new undesirable set of circumstances, in his second-to-last film, Tarantino is acknowledging that he’s no longer the Sundance kid, while also letting himself off the hook. It’s okay. No star burns forever.

But then again, as long as there are kids like little Quentin, or as I see it, his eight year-old stand-in (played by little Julia Butters) - who in one of the film’s funniest and also most moving scenes validates Dalton’s existence - maybe they sort of do. Maybe stars don’t have to die so long as they’re loved.

As for Tarantino, an imperfect man (because who is not?) and director who has brought junior cinephiles like myself so much joy over the years, rescuing falling stars along the way and allowing them to shine anew, what can be said of a cinephile filmmaker with a love so pure? Well, lots has been said already, and God only knows how much more will be said over the next century.

At the end of the day, it does not matter how many of his creative battles ended in clear victory. The fight, no matter how full of grind, has been nothing short of poetic. And now, 25 years after the Sundance kid swept Cannes with his ode to pulp fiction, a love-letter of a career has culminated into Once Upon A Time In… Hollywood, a wistful fairytale that both meditates upon and executes the holiness of entertainment... and that duality is a thing of pure beauty.

Review originally published during the Cannes Film Festival in May 2019. The film will open nationwide in U.S. theaters on Friday, July 26, 2019.

Do you feel this content is inappropriate or infringes upon your rights? Click here to report it, or see our DMCA policy.
1960sBrad PittHollywoodLeonardo DiCaprioMargot RobbieQuentin TarantinoStuntman

More about Once Upon A Time in Hollywood