Directed by Alex Holmes, the documentary recounts the epic voyage of an all-female crew. 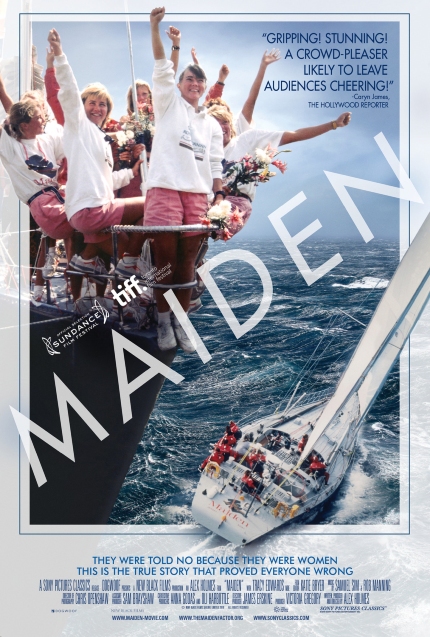 On the surface, Maiden can be enjoyed as a stirring, seagoing saga, following along as an all-female sailing crew assembles for a history-making trip around the world. Below the surface, however, sexism rears its ugly head, throwing shade left and right.

Directed by Alex Holmes, the documentary examines events from three decades ago, which is a short enough time that many of the principals are still alive and willing to share their memories. It's a bracing look into a past where women were constantly belittled as they sought to establish their rightful place as equals to the men who dominated the world in which they lived.

More to the point, for men who were of thinking age during the late 1980s, including myself, it is tempting to ask, Was it really that bad?. Of course it was! Asking that question reveals that some of us were not sufficiently sensitive to the circumstances around us. Indeed, it's made me recall and rethink some of my own behavior in the past.

The documentary also serves as a comparison point for today: Has anything really changed? Sure, we can see strides that have been made in many fields. Yet it's revealing that the few men who are interviewed for the film are unapologetic about their past blatant sexism; one former, rival sea captain eventually acknowledges the accomplishments by the all-female crew, while consistently referring to them as "girls."

While that may be dismissed by some as linguistic challenges, since the former captain's native language evidently is not English, or perhaps editing decisions by the filmmakers, the continuing, more subtle sexism continues apace today.

Getting back to the documentary itself, it features a surfeit of material that was filmed in the late 1980s, much of it shot in rough conditions and of lower video quality. That stands in contrast to the modern-day interviews, which are interspersed throughout, shot against a placid background with a still camera. Even though this is quite a common format for documentaries today, it's also a reminder that long sea voyages often involve rough seas and placid quiet, and reinforces the challenges that faced the crew of the Maiden.

Tracy Edwards is the star of the film, the center of the universe that is explored. As the film itself acknowledges, it is a coming-of-age story, as the young woman sought to find her place in the world during her late teens and early twenties. Then she found herself at sea and the rest of the story is told in the film.

It's an enthralling tale in which the real-life characters, chiefly Ms. Edwards but also her fellow crew members and others, reflect on their own actions and motivations. The epic voyage itself featured triumphs and calamities, and did not always follow the expected path. So Maiden becomes more fascinating as it plunges onward. And it's wonderful to see the captain and her crew receive the full honors and recognition that they so richly deserve.

Perhaps most of all, Maiden is a tale that allows for self-reflection. 'Look how far we've come,' claim various advertisements for various products. Yet, look how far we still need to go.

The film is now playing in select theaters across the U.S. via Sony Pictures Classics. It will open in more cities, including my own Dallas, on Friday, July 12, 2019. Visit the official site for more information.