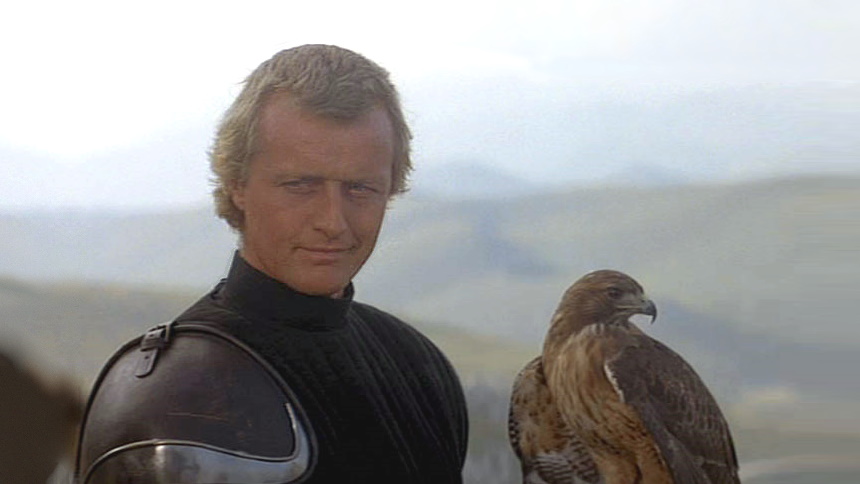 It is with sadness that we hear the news that last Friday, actor Rutger Hauer died after a brief illness, at the untimely age of 75.

His breakthrough as an actor in the Netherlands was in Paul Verhoeven's television series Floris, in which he played a knight, but films soon followed. Verhoeven's Turkish Delight got nominated in 1974 for the best foreign-language Oscar, and introduced Rutger to the international arthouse audiences.

But of course he REALLY shot to fame in the eighties when he played Roy Batty in Ridley Scott's Blade Runner, in which he improvised the character's famous final speech. Many memorable roles followed, including the lead in Sam Pakinpah's Ludlum adaptation The Osterman Weekend, the titular hitcher from The Hitcher, and Navarre in Ladyhawke (seen above). He kept busy in arthouse and genre films, showing up both in blockbusters like Nolan's Batman Begins but also ballsy indies like Jason Eisener's Hobo with a Shotgun.

All in all IMDb lists a whopping 172 actor credits for him. Yesterday, Guillermo del Toro described him on Twitter: "...an intense, deep, genuine and magnetic actor that brought truth, power and beauty to his films". Amen to that. Our condolences go to Rutger Hauer's family, friends and many fans.