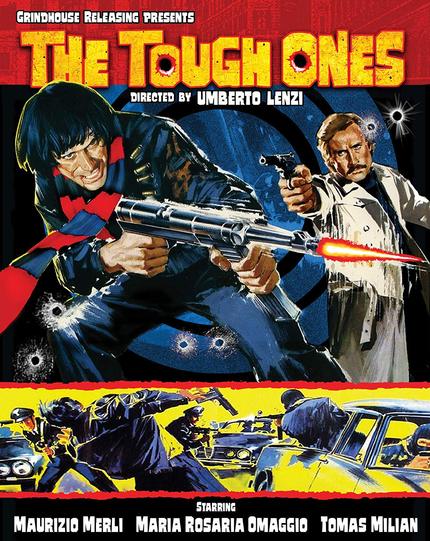 Of the many genre booms in Italian cinema between the '50s and '80s, few were as successful and prolific as the Poliziotteschi craze of the late '60s and '70s. Crazed adrenaline-fueled gonzo action films based around take-no-prisoners cops and the worst of the worst criminals, these films were highly entertaining and profitable, meaning that they were plentiful. Just like any other genre, though, there were more than enough bad ones to counter the classics, but Umberto Lenzi's The Tough Ones (Roma A Mano Armata) is a definite gem and one of his most accomplished films.

Italian superstar Maurizio Merli stars as Inspector Tanzi, a cop with a flare for violence who is all about getting the job done at any cost. He first sets out after a small-timer trying to set up a crime network named Tony Parenzo (Ivan Rassimov), but soon, as part of his investigation, he encounters a hunchback named Vincenzo Moretto who seems innocuous at first, but put a machine gun in his hand and he quickly transforms into a psychotic killing machine who needs taming. Moretto is played by Tomas Milian, the Cuban import who became a major movie star in the '60s in Italy with a delirious panache that makes it tough to look away.

While the film could be very simply described as a being about Tanzi's search for Moretto, that's only a small part of the story. In reality, Lenzi's vision isn't that singular, instead he set out to make one of the craziest, most action packed action films possible, and in that regard he is wildly successful. The Tough Ones may be confusing at times, but it is never boring, between the police brutality, crazy car chases through Rome's already insane street traffic, machine gun battles, and horrific underworld crime syndicates, there's never a dull moment.

I've gone on record in the past that Lenzi is not my favorite director from this era of Italian cinema. He's always seemed like a bandwagon jumper and check-casher to me, eager to capitalize on whatever trends were making money. However, with The Tough Ones, and to a lesser degree The Cynic, The Rat, and The Fist a couple of years later, it seems clear to me that if there was anywhere that he shined it was in these poliziotteschi. The Tough Ones is exceptionally well directed and the action is always engaging, even when it's a touch confusing. I watched the film twice before writing this review, which isn't something I typically do, but it was so much fun I wanted another go-round.

Grindhouse Releasing is very particular about the films they put out on home video. Over the course of the last six years, they've only put out about a dozen films on Blu-ray. However, every single one has been a stunning release, and that trend continues with The Tough Ones. The three-disc special edition (2 Blu-rays, 1 CD) features a brand new beautiful 4K restoration of the film that makes the film look as though it could've been shot yesterday. Colors are vibrant, detail is exceptional, and the film has likely never looked better, probably not even in the cinema way back in 1976. Simply put, it's a revelation. Grindhouse have included two audio tracks, both Italian and English, and both are nice and clear. Overall, the A/V presentation is reference quality.

Never a label to skimp on the extras, Grindhouse has packed this edition with around nine hours of bonus material across the two Blu-ray discs. On disc one we get a feature audio commentary from Eurocrime! documentary director Mike Malloy that is informative and entertaining, as well as a feature length documentary on Umberto Lenzi that was previously available on 88 Films Blu-ray of Eyeball. In addition to that, there is also a conversation with composer Franco Micalizzi and Lenzi about creating the soundtrack to the film and a short feature on the role of big cities in Italian action films of the time. Disc one rounds out with ton of trailers for Grindhouse's other films as well as a couple of The Tough Ones spots.

The second Blu-ray is packed with interviews galore. Over six hour of new and archival materials are presented here, making this beyond definitive. We get extended conversations with Lenzi, the late Tomas Milian, supporting players Maria Rosaria Omaggio, Corrado Solari, Maria Rosaria Riuzzi, actor/costumer Sandra Cardini, writer Dardano Sacchetti, composer Franco Micallizi, and a wonderful archival tribute to Maurizio Merli featuring Lenzi and other filmmakers like Ruggero Deodato, Enzo G Castellari, and Marco Manetti. Add to all of that, a CD of the film's incredible psychedelic jazz soundtrack and wonderful liner notes from Eurocrime expert, Roberto Curti, and you've got an amazing, jam-packed special edition of a film that definitely deserves it.

If you have never owned a Grindhouse Releasing product and are hemming and hawing over the price tag of this one, allow me to assure you that the package they've put together for The Tough Ones is more than worth it. This Blu-ray special edition belongs in every cult film fan's library.