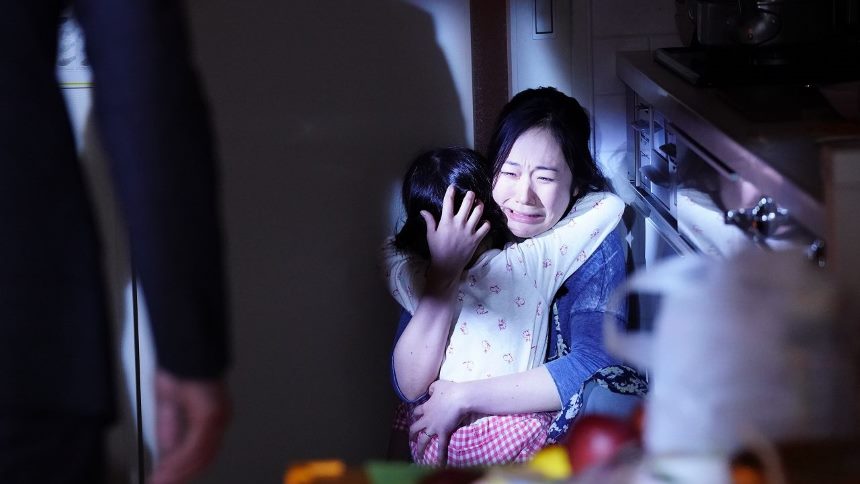 There are few filmmakers in Japan whose work is quite as immediately recognizable as Nakashima Tetsuya. Even as he has evolved over the last fifteen years from the candy-colored pop explosion of Kamikaze Girls to his gritty 2015 thriller, World of Kanako, he maintains a unique visual and editorial style that makes his work compelling. With his latest film, It Comes, Nakashima tries his hand at horror and manages to utilize his perspective to tell a gripping, visceral, emotionally rich story that plays its card very close to the vest.

Hideki (Tsumabuki Satoshi) is a boisterous salaryman who has just gotten married to Kana (Kuroki Haru), a quiet young woman who seems desperate to fit the role of the devoted wife. More than a little tipsy at their wedding reception, Hideki announces to his guests that he wants to have a baby as soon as possible. Soon after, as if by sheer force of will, Kana is pregnant, and the couple are on their way to their happily-ever-after perfect family life. Their daughter, Chisa is born, and things seem to be going great with a loving father and a doting mother completely devoted to the little girl who is the center of their universe. That is, until the hauntings begin.

Something is out there and it wants Hideki's family. It will stop at nothing to destroy them. The unseen force tortures the trio constantly, it knows their darkest secrets and it's going to take them by any means necessary. Hideki consults a psychic medium to help him dispel whatever evil it is that has stalked him and his family to their seemingly perfect home. At first things start to make sense, but everyone soon realizes this is much bigger than any of them is able to manage, and that's when shit gets really crazy.

Nakashima comes to horror with a wealth of experience in thrillers and outré comedic narratives, but no matter what the genre, he is always experimenting with the form, pulling at the edges of what the audience expects in order to surprise. With It Comes, Nakashima's storytelling skills are in top shape, he masterfully manipulates the audience by reframing the narrative repeatedly, leaving a breathless audience gasping to try and solve the puzzle. The beauty is that we are never a step ahead of the film, it's always there to surprise us, to tease us with possible answers that turn out to be red herrings, to make us question what we've already seen by pointing the camera in a different direction. It's wildly unorthodox, deceptive, and I was grinning from ear to ear with every revelation.

Though the film is constantly changing perspectives, It Comes never loses sight of its focus, they must save the little girl, and everything else revolves around that singular goal. This focus on family is a constant thread in Nakashima's work going back to his monumental bummer Memories of Matsuko, through to World of Kanako. The focus on the family unit and the way it disintegrates under pressure is a theme that Nakashima explores over and over again. With It Comes, he trains his eye on a family where not everything is as perfect as it seems and the way that mask manifests resentment and foments rage, resentment, and even revenge.

Viewers familiar with Nakashima's visual style will be delighted with It Comes. Unlike World of Kanako, It Comes tells a story of a crumbling family who do so in the light of day. Whereas that film used shadow to illustrate the seediness of a daughter lured to the dark side, It Comes is about a family that appears to have everything going for them, who only fall apart behind closed doors.

Much of the early part of the story is visualized in a naturalistic style, but when push comes to shove and Hideki and the forces he's enlisted to help him have to pull out the big guns, the color palette and style turn much more sinister. As Hideki's nerves rot and his desperation grows, Nakashima relies on heavily stylized lighting and production design, his surroundings reflect his shattered mental state. Shards of glass litter the ground around him as he attempts a final confrontation, only to find that it's nowhere near over.

While I'd never dare to spoil the many surprises presented by the constantly morphing narrative, I'd be remiss if I didn't mention the fact that It Comes has one of the craziest final acts I've ever seen in a horror film. What begins as a relatively contained chamber piece about a family fighting to save themselves from unseen malevolence à la Poltergeist, culminates in an impressively bonkers - and massive - finale that you will not see coming.

My favorite films of Fantasia 2019 so far, It Comes is a brilliantly told, complex, and surprising journey that is the cinematic equivalent of Mr. Toad's Wild Ride. Just when you think it's going to zig, it zags; just when you think you've got a handle on where the film is going, Nakashima grabs you by the hand and whips you around to look at an entirely different view of events to remind you that you are not in control, he is. There's very little that is more satisfying to me in a film than being led by the hand of a filmmaker who knows how to subvert expectations, Nakashima is that filmmaker, and It Comes is a savagely entertaining and surprising shocker that will leave you exhilarated.

More about It Comes