Blu-ray Review: SWING TIME, Or, How To Interrogate Blackface And Love The Dance 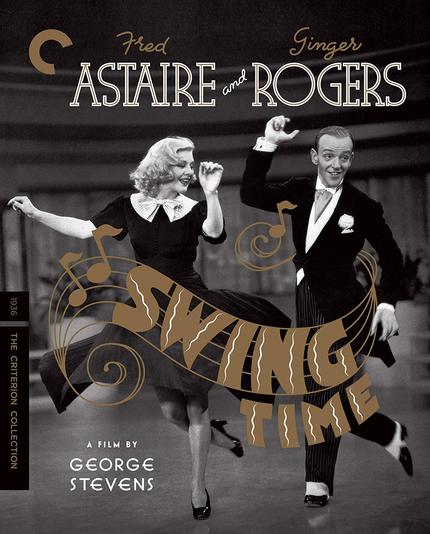 Holy shit, this was a tough one.

There is no more iconic dance pairing in the history of Hollywood than Fred Astaire and Ginger Rogers. Over the course of sixteen years from 1933 to 1949, Astaire and Rogers starred together in ten films that would made an indelible mark on filmgoers that lasts up to the present day. While Astaire made a whole career for himself as an actor and performer beyond these films, it seems that Rogers never quite stepped out from his shadow, with her film career fizzling toward the end of the '50s. However, there was never another duo quite like them, and never were they better together than in Swing Time.

This 1936 film celebrates their undeniable chemistry in a rather flimsy story about a gambling dancer who meets up with a dismissive dance instructor and their circuitous journey toward each other through various trial, tribulations, and tap dances. Directed by Hollywood legend George Stevens (Shane, Giant, Gunga Din, etc...), Swing Time is a whimsical distraction from the Great Depression that served as a delightful trip for filmgoers into a world where anything was possible, thanks to the amazing work of its two leads.

Astaire plays a ne'er do well dancer named Lucky who gets cold feet on his wedding day, leading his fiancee to call it all off. When her father decides to give him another chance if he can raise $25K, Lucky goes on the hunt, stumbling across well meaning dance instructor Penny (Rogers), who he initially lowballs, but eventually falls for. While the two of them are working toward Lucky's goals, they develop unexpected feelings for one another, and Lucky's life gets complicated. Together they dance their way to victory, but soon decide that they were each what the other wanted all along.

Make no mistake, beyond the plotting and somewhat complicated mechanisms designed to lead these two toward one another, Swing Time is all about the dance. Astaire and Rogers had already starred in several musicals leading up to this, but with Swing Time, they really hit the jackpot. Featuring evergreen hits like The Way You Look Tonight and A Fine Romance, the film delivers romantic moments for the ages, presented for the screen with some of the most engaging and mesmerizing dance steps I've ever seen, courtesy of the two leads and Astaire's favorite choreographer, Hermes Pan. It's an absolute joy to watch these two light up the dance floor in a way that makes you feel as though they must be literally walking on air.

The one stain, and it is significant, on Swing Time is an extended show-stopping dance sequence that Astaire performs in blackface called Bojangles in Harlem that is enough to make one's jaw drop. Impossible to ignore, even with the objectively impressive quality of the dancing at hand, the piece is ten minutes of cringing, even for the least PC among us, due to the fact that Astaire is not only in blackface, but also performing in a manner so exaggerated and far from the style of Bill "Bojangles" Robinson in the piece that is feels like more of a caricature than the tribute that I legitimately believe was intended.

Bojangles of Harlem is about five miles of rough road along a hundred mile track, but that doesn't excuse it from being seriously regressive, even for 1936. Thankfully, the disc doesn't ignore this fact and there is plenty of conversation about the piece that both helps to contextualize it as well as appreciates the sheer technical virtuosity on display.

But I digress, Swing Time is a marvelous musical packed from stem to stern with delightful dancing and the punchy screwball comedy one expects from a film of this period. I had a ton of fun, even if the plot was fairly light and little more than an excuse pushing the film toward the next big number. Definitely a high recommendation from me.

The Criterion Collection presents Swing Time in a new 2K restoration with an uncompressed mono audio track for the first time on Blu-ray and it's as gorgeous as you might imagine. The black and white photography is rendered beautifully, and the numerous musical numbers shine, as does the dialogue and the few sound FX we get throughout the film. Swing Time is all about the dancing, and this is probably the best presentation of a '30s Hollywood musical on Blu to date.

Criterion ports over some older extras as well as presenting some brand new analysis to help present a well-rounded view of Swing Time. First of all there is a 1986 commentary from Astaire Dancing: The Musical Films author, John Mueller. The commentary is well researched and informative, though being from 1986, it is a bit dry as the format was still quite new at the time and no one really knew what commentaries needed to be successful. We also get archival interviews with Rogers, Astaire, and Hermes Pan conducted by George Stevens, Jr. that are all very enlightening and definitely add a lot to the conversation. Then there is a documentary on the making of the films soundtrack and choreographer with critic Gary Giddins, Brian Seibert, and Deborah Grace Winer that talks about the history made by the film and its composer and lyricist, Dorothy Field. Lastly, but perhaps most relevant, is a brand new interview with academic Mia Mask on the controversy and cultural implications of Bojangles of Harlem that I found fascinating.

Swing Time is an undeniable classic, but as with any work from the past, it is well worth interrogating the film and its cultural missteps in order to fully appreciate it. I felt an amazing joy while watching Astaire and Rogers dance that I can't quite describe with words, but is certainly a feeling that I hope we all get to experience. If you're a fan of vintage movie musicals, Swing Time is a must own and this Blu-ray is the only way to go.