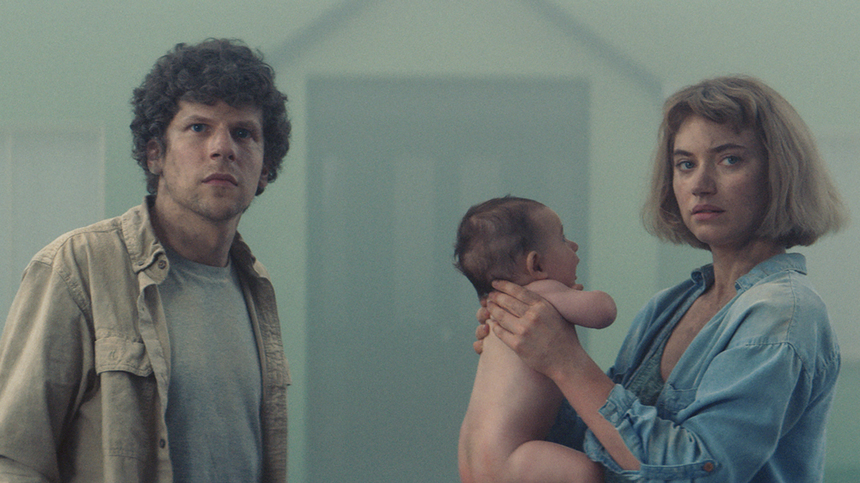 Long one of the premiere genre film events in the world, the Neuchatel International Fantastic Film Festival has released their full program for their upcoming 2019 edition and it does not disappoint at all. Opening and closing with pictures fresh from Cannes - Quentin Dupieux's Deerskin and Lorcan Finnegan's Vivarium, respectively - the lineup boasts a selection of festival favorites and new discoveries along with compelling retrospective selections, including an extensive retrospective of African cinema. Check out the announcement below!

NIFFF 2019: THE 19TH EDITION AT THE CROSSROADS OF IMAGINATION

The Neuchâtel International Fantastic Film Festival (NIFFF) completely embraces the possibi- lities of alterity in its ambitious programme for the 19th edition, which will take place from July 5th to July 13th. The competition will champion the universality of imagination by gathering vi- sionary creators from all over the world in the thousandyear-old city. Films in the International Competition will compete for the H.R. Giger Narcisse award (CHF 10,000), granted by the City of Neuchâtel. This year’s selection highlights the incredible dynamism of contemporary fan- tasy films, a genre that still holds a special place for master filmmakers and newcomers alike. Genre cinema is a bottomless well of rejuvenation and diversity, which invites the audience to step out of its comfort zone to understand today’s world.

The gripping vision of emerging European auteurs (THE LODGE, Veronika Franz and Severin Fala; THE HOLE IN THE GROUND, Lee Cronin; YVES, Benoît Forgeard; THE ROOM, Christian Volckler) will rub shoulders with the American indie film scene (SOMETHING ELSE, Jeremy Gardner and Christian Stell; KNIVES AND SKIN, Jennifer Reeder; DANIEL ISN’T REAL, Adam Egypt Morti- mer). As an international event, the festival also focuses on fantasies from Asia with a high-quality competition – NEW CINEMA FROM ASIA –, and from Africa with the retrospective REFLECTIONS OF SUB-SAHARAN AFRICA, in the presence of exceptional guests such as Ghanean afrobeat duo FOKN BOIS and filmmaker Pierre-Alain Meier. The EL DORADO section will showcase three gems from Latin America, including the masterpiece MONOS directed by Alejandro Landes (win- ner of the Sundance Jury Prize). Dan Wechsler, one of the producers, will be in attendance.

The festival, which has become the point of convergence for contemporary audiovisual produc- tions, will welcome seasoned artists like Denis Côté (who will present his GHOST TOWN ANTHOLOGY) and Miike Takashi, who will be back in Neuchâtel with FIRST LOVE. New artists will also make their sensational debut in the competition, among them young prodigy Blaise Harrison and his supernatural teen movie LES PARTICULES, and New Yorker Carlo Mirabella-Davis, who tackles the issues of patriarchy in SWALLOW. Auteurs with unique universes will complete the picture: Benoît Forgeard and his smart fridge called YVES, Brazilians Kleber Mendonça Filho and Juliano Dornelles with the social satire BACURAU, and Kiwi filmmaker Ant Timpson (important producer of New Zealand genre fare) who will present his (unhinged) Elijah Wood-led directorial debut COME TO DADDY. The climax of this edition will be the Swiss premiere of Lorcan Finne- gan’s VIVARIUM, in which Jesse Eisenberg and Imogen Poots are trapped in a nightmarish and labyrinthine neighbourhood.

The international competition will offer a vivid overview of contemporary fantasy cinema. Young Franco-Swiss director Blaise Harrison will take centre stage with his first fiction film LES PARTICULES, a feature that uses the CERN as a narrative accelerator. Eagerly awaited is the return of Spanish director Miguel Llansó, who will be presenting his new innovative creation JESUS SHOWS YOU THE WAY TO THE HIGHWAY with his actors. Also worth noting is the presence of Californian filmmaker Jeremy Gardner, for the International premiere of his monster tale SOMETHING ELSE.

As a main vector of influence on worldwide genre cinema, exciting Asian films will be featured in a competition that keeps the festival’s heart beating at all times. Unstoppable and inimitable filmmaker Miike Takashi will take part with FIRST LOVE, his 103rd feature film. Japan is front and centre this year with the European premiere of Eguchi Kan’s THE FABLE, an adaptation of the manga of the same name from Katsuhisa Minami. Korean director Lee Won-tae will attend the Swiss premiere of his film THE GANGSTER, THE COP, THE DEVIL, a nocturnal thriller who should leave audiences breathless in Europe as well as Asia. Another come-back is that of Zhang Yimou, director of SECRET OF THE FLYING DAGGERS, with his new swordplay epic, SHADOW.

FILMS OF THE THIRD KIND

An ode to the diversity of fantasy cinema, the FILMS OF THE THIRD KIND section is filled with highly anticipated premieres. Prepare to discover the BDSM world of Finnish filmmaker Juk- ka-Pekka Valkeapää (DOGS DON’T WEAR PANTS) and the tale of redemption of a skinhead por- trayed by Jamie Bell (BILLY ELLIOT) in Guy Nattiv’s SKIN. ABOU LEILA from Algerian director Amin Sidi-Boumédiène and ACHOURA from Franco-Moroccan filmmaker Talal Selhami reflect the will of the festival to explore cinematic treasures from the Middle East. Iconic Spanish actor Sergi López will present 7 REASONS TO RUN AWAY (FROM SOCIETY) alongside Gerard Quinto, one of the directors of this absurdist horror anthology.

This out of competition section focuses on radical and powerful visual experimentations. This includes the European premiere of the nightmarish BLISS (with actor Jeremy Gardner in atten- dance), and the world premiere of Canadian director Jovanka Vuckovic’s RIOT GIRLS. Featuring unusual model Melanie Gaydos, TOUS LES DIEUX DU CIEL, which is among the year’s most intriguing projects, will be presented by Quarxx, its creator. Humour will not be forgotten with Olivier Afonso’s GIRLS WITH BALLS, about the survival tale of a female volleyball team pursued by degenerate hunters – with Denis Lavant and Orelsan guest starring!