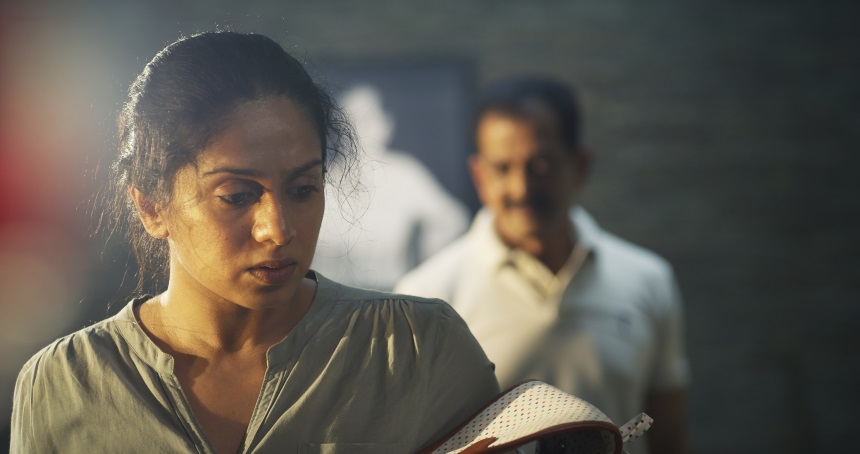 A movie producer has been murdered in an upscale bungalow in Bengaluru. Who is the culprit? No one knows, but a pair of unlucky would-be actors are the primary suspects, and it's going to be up to them and one dogged detective who doesn't like to play by the rules to figure this one out in Arvind Kamath's new Kannada language thriller, Arishadvarga.

It's been a while since since I've seen and enjoyed a film that utilized this many parallel narratives in service of a story that is essentially confined to a couple of main locations. The two actors, Anish (played by the handsome Mahesh Bung) and his female counterpart Saakshi (played by Samyukta Hornad), are caught in a web of deceit designed to frame them for the murder of the producer Manjauth Bhat (Avinash Yelandur) that there's almost no way to untangle. They are soon met by police inspector Ashok (Nanda Gopal), at which point the story gets even more complicated. There is a mysterious woman giving directions be phone, a Peeping Tom who sees a bit too much, and a ton of other side plots and narrative red herrings to keep the proceedings lively.

Director Kamath's style is very contemporary neo-noir, not unlike some of the best thrillers out of the Tamil film industry, and even some of the snappier films in Bollywood, like recent critical smash Andhadhun. With these types of films, the narrative is designed to keep the audience guessing by zig-zagging back and forth through differing plot threads in an attempt paint a full picture of a very complex story. Arishadvarga does an admirable job in this regard, keeping its audience in suspense until the very last minute, making its two-hour plus run time seem to fly by.

At its core, Arishadvarga is a story of ambition and jealousy, and the ways in which these can poison even the purest of motives. Anish, the male actor entrapped in the murder plot at a patsy, has seen his big screen dreams stepped on so many times that he's resorted to working as a gigolo to make ends meet. It's in this capacity that he's invited to the Bhat home, but it is his ambitions as an actor that end up getting him in trouble and providing motive. Saakshi, on the other hand, is actually at the house for what she thinks is an audition, but things don't go well for either of them.

Through it all there is inspector Ashok, a hard-boiled film noir type policeman who takes to guff and believes no one. He's a hard ass, the kind of man who would've been a private dick in a classic noir, but here he's a surly detective on the force who doesn't care much for the rules. He's only interested in the truth, and he doesn't care what lengths he has to go to in order to find it. Along the way he'll encounter avarice, ambition, infidelity, and any other vice you can think of, keeping the action fresh along the way for the viewer.

Kamath not only directed the film, but also wrote it, which in this case is a blessing and a curse. He seems very protective of his work, resulting in a film that, while engaging, is also a bit self-indulgent and can be hard to follow once the triple and quadruple crossing starts, not to mention the multiple unreliable narrators for different sections of the story. While it's fun to keep guessing what's going on, it can be difficult to separate the different story strands enough to complete the picture accurately.

By the time Arishadvarga finds its conclusion, the audience is a bit spent, but mostly in a good way. This kind of twisty thriller is fairly common in Indian cinema, they do love their double crossings and conflicting narratives, but this kind of film is typically told in a more crowd-pleasing kind of big budget masala version, rather than a down and dirty straight noir, making Kamath's film a breath of fresh air.

Do you feel this content is inappropriate or infringes upon your rights? Click here to report it, or see our DMCA policy.
Arvind KamathIndiaLondon Indian Film Festival