Check Out The Brutal Trailer For Danishka Esterhazy's THE BANANA SPLITS MOVIE! 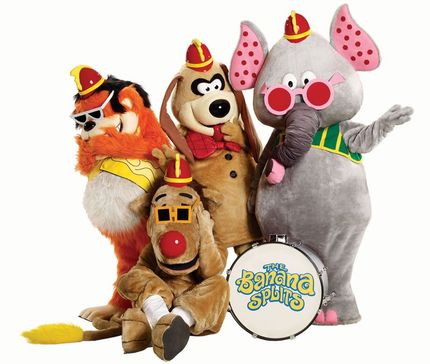 These ain't your parents' Banana Splits. When news broke earlier this year that director Danishka Esterhazy (Level 16) was making an R-rated movie based on the '60s Sid & Marty Kroft "men in big furry suits" variety show, The Banana Splits, the genre film world took notice. It's a - pardon the pun - bananas idea. A rock band made up of anthropomorphic goofy looking animals is just about the least threatening thing on earth. Until now.

TV's SyFy network, home of the Sharknado franchise among other low budget wonders, dropped the trailer today, and it looks like it might be a fun, funny, gory good time! Comparisons have already been drawn to popular video game Five Nights at Freddy's (which my son says was scary, now if you'll please get off my lawn), but since I have no frame of reference for that, I'm gonna say that I'm cautiously optimistic.

The action in the trailer is decidedly low budget, bringing to mind for me recent Fangoria feature Puppet Master: The Littlest Reich (which I did not like AT ALL). Perhaps this is more clever than that film, not a high bar to clear, in my opinion. The film has been confirmed as rated R for "horror violence and gore," which seems like a step in a fun direction, at least!

In any case, SyFy describes The Banana Splits briefly as, "The beloved children's show is back... with a vengeance, a horrible, bloody vengeance. Starring Dani Kind, Finlay Wojtak-Hissong, and Romeo Carere. Premiering on SYFY later this year."

Take a look at the trailer below, are you as curious as we are?