Blu-ray Review: The Fun Never Ends in NIGHT OF THE CREEPS

Blu-ray Review: NIGHT OF THE CREEPS 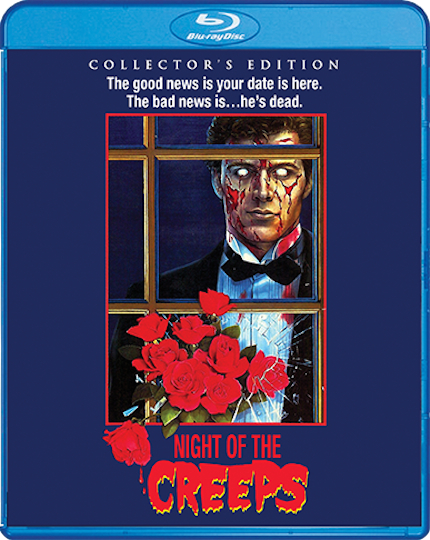 Anyone who knows me well knows that I count Night of the Creeps among my favorite movies of all time. It's weird as hell, funny, creepy, campy, and utterly engrossing. It's Fred Dekker's (The Monster Squad, RoboCop 3) first film, and it's finally become well known to fans of cult and horror film, due to home video releases over the years.

That brings me to this current release, the Collector's Edition, out June 25 in North America on Blu-ray, from Scream Factory.

Originally released in theaters in 1986, Night of the Creeps boasts awesome direction, great practical effects, and the legendary Tom Atkins (Escape From New York, Creepshow, The Fog, Halloween III: Season of the Witch, Lethal Weapon). That alone should be enough to get a film fan excited.

But let's get on with the story: an alien experiment filled with zombie-causing space slugs crashes to Earth in 1959 and immediately creates havoc. At the same time, a killer is on the loose, having escaped an institution for the criminally insane. Things don't go well for one young couple.

Fast forward to 1986, and a ton of coeds are living their lives, going on dates, pledging frats and sororities, and getting ready for the big formal. Among these students are Chris (Jason Lively, of National Lampoon's European Vacation) and his best friend J.C. (Steve Marshall). When a frat prank goes horribly wrong and a cryogenically frozen body --- along with hidden space slug --- are unfrozen, the adventure begins. The students, with help from love interest Cynthia (Jill Whitlow) and Tom Atkins as Detective Cameron must defeat the slugs and ensuing horde of zombies that threaten to destroy EVERYTHING.

Night of the Creeps has real style, great shots, and Atkins is fantastic in it. There's a great scene where he's got to go get some heavy artilery from his buddy (the late, great Dick Miller) in the department, where the old friends banter before Atkins must take what needs (including a flamethrower!) by force. There's another standout scene where the detective recounts what happened to his former sweetheart and the very illegal thing he did to get revenge. Plus, the zombies, squirmy slugs, and weird little aliens are all so much fun.

That all said, let's get to the discs. One's a theatrical version with the "gotcha" ending, and the other is the director's cut, which had the alien ending that TV viewers, including myself, saw. This version is creepier and better than the requested studio (theatrical) ending.

This release is almost the same as the last one, but it has some new special features. The commentaries and featurettes have been ported over, but there are some new actor and crew interviews, as well as a short special feature that visits some of the original locations within the film. The film looks and sounds good, and for anyone who doesn't yet own Night of the Creeps on Blu-ray, this is a terrific release.

The real prize was for the Night of the Creeps Deluxe Edition (now sold out) with exclusive Tom Atkins action figure, as well as limited-edition artwork on an extra slipcase and the same art in a nice lithograph. Can you guess which version I was thrilled to get in the mail recently?

Here are the extras in the Collector's Edition:

It's a good time, but not really necessary if you've got the older version. Of course, collectors do love an upgrade. If you want the Collector's Edition, click here. To fuel your FOMO, check out the Deluxe Edition with exclusive Tom Atkins action figure (remember, it's sold out), you can click here.

Night of the Creeps

More about Night Of The Creeps