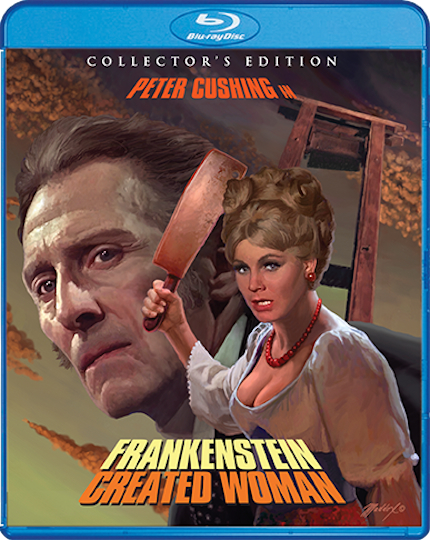 Fresh out from Scream Factory today in North America, is the collector's edition Blu-ray release of the 1967 film Frankenstein Created Woman. Helmed by Hammer Films' most well-known director, Terence Fisher (The Hound of the Baskervilles, The Curse of Frankenstein, The Mummy), the story goes as thus: Baron Frankenstein is unfrozen (and amazingly re-animated) by his buddy Dr. Hertz for more beyond-the-grave shenanagins.

Played by the always amazing Peter Cushing, Baron Frankenstein and Dr. Hertz proceed to experiment with life after death, and in this case, transferring the soul and personality of one person to another. They get their chance to do this when a group of dandy thugs set up the doctors' assistant Hans for murder. He's executed and his deformed girlfriend Christina (Susan Denberg) is so distraught that she commits suicide.

The doctors are somehow able to fineagle Hans' soul into Christina's body, and she's suddenly a beauty. Her hair color's inexplicably transformed from red to blond, and her facial scarring and redness have disappeared. It's absurdist alchemy, really.

It doesn't take much for Hans to become enraged and go after the jerks who caused his and Christina's deaths, and the bodies pile up. A film like Frankenstein Created Woman is far more about watching what happens than the actual plot, and because this is a Hammer Film, the color, costumes, and heaving bosoms are on full, lurid display. The flick is a lot of fun and good for a crowd or screening night of like-minded weirdos.

The new 2K scan is absolutely gorgeous with only a few instances of blemishes and speckling. Kudos to Scream Factory for releasing this new edition of the film. Sound is great, as well. There are lots of new and older bonus features on this disc, including a few new interviews, which are the usual talking heads chatting about the production, in addition to new commentaries from film historians that are always interesting to hear.

Hammer completists and fans will want this release. To watch a trailer and to purchase the Blu-ray for Frankenstein Created Woman, check out Scream Factory's site here.