70s Rewind: THE BIG FIX, Sleepy Times Are Over 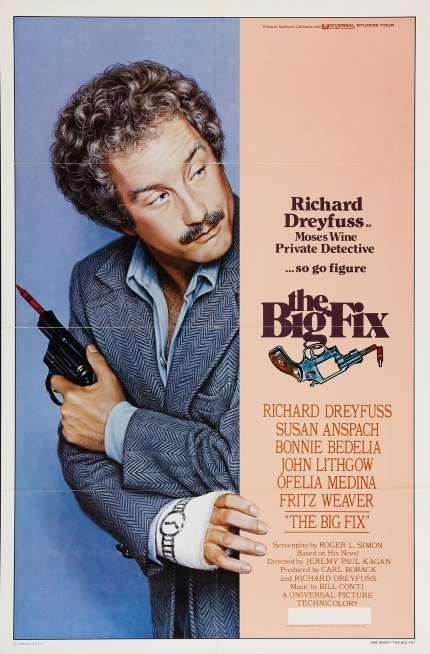 Why is your wrist in a cast?

The Big Fix
Now available on Blu-ray from Twilight Time.

Love him or not, Richard Dreyfuss became a major star after the massive success of Jaws (1975).

A working screen actor in television shows and a few films for more than ten years by that point, his first big impression probably came in American Graffiti (1973). His lead roles in The Apprenticeship of Duddy Kravitz (1974) and Inserts (produced in 1974, released in 1976) "reflect a similar tone," as I wrote in February 2017, "leaning a bit too hard, too often on the hysterical edge. Yet the actor was also capable of reigning in his excesses to hit very intimate and convincing notes. Some of his very 'actor-y' impulses seen in this movie were later played for laughs in The Goodbye Girl, where they fit much better."

Moses Wine, however, is a private investigator who never meant to become a private investigator. Created by Roger L. Simon in his same-titled novel, first published in 1973, the detective Moses Wine bears little resemblance to other detectives, because Moses actually has a life beyond detecting. (The Kindle edition, which I will read Some Day Soon, is available here, along with links to print editions.) Simon wrote the book over a span of just six weeks, with "the idea of updating the genre," featuring "a private eye of our generation--hip, political. A longhair."
Simon also wrote the screenplay for the film, which was released in 1978. Moses Wine is introduced as he conducts surveillance from his yellow Volkswagon bug (trust me, a very hot, hip item at the time), with his two young sons in the car with him.

In The Big Fix, Moses has mellowed out from his days as a radical in the 1960s. He remains politically and socially liberal, smoking marijuana in his home and espousing discontent with the mainstream, but he has fallen asleep, as it were, and just about given up on caring about anything, beyond his children. The case that comes his way wakes him up, and it's marvelous to watch Dreyfuss evolve along with the character.

The themes resonated then and now, which makes watching the film even more enjoyable today. The cast includes a flock of faces that are familiar now, even if they weren't then, including John Lithgow, Bonnie Bedelia, Ron Rifkin, Susan Anspach, Nicolas Coster, Fritz Weaver, and F. Murray Abraham; an unknown Mandy Patinkin has a tiny bit as a pool man.

Its endlessly fascinating location shooting in Southern California touched my nostalgic heart, since I lived in Los Angeles at the time. Unfortunately, I didn't see it in a theater at the time. Released in November 1978, a month dominated at the box office by National Lampoon's Animal House and Cheech and Chong's Up in Smoke, The Big Fix did not fare well among its competitors

Director Jeremy Paul Kagan, coming off Heroes (1977) with Henry Winkler, next made The Chosen (1981), a more straightforward drama, and has continued directing films and TV shows. Roger L. Simon wrote at least six more Moses Wine novels, and has also earned screen credit as a writer for at least six more films; he received an Academy Award nomination for writing Enemies: A Love Story (1989).

Dreyfuss, of course, has remained busy through the years, eventually earning another Academy Award nomination for Mr. Holland's Opus (1995). Twilight Time's Blu-ray looks great; Julie Kirgo's program notes in an accompanying booklet are a must-read after you see the film.

Summing up: Witty dialogue, a distinctive private-eye center, and themes that resonate today combine to make this film thoroughly enjoyable.

70s Rewind is a column that allows the writer to take stock of his favorite movie decade.

Do you feel this content is inappropriate or infringes upon your rights? Click here to report it, or see our DMCA policy.
70s cinemaJeremy Paul KaganLos AngelesRichard DreyfussRoger SimonTwilight Time