REVIEW: Booksmart is knowledgeable in its quirky coming-of-age brainiacs opting for overdue frivolity 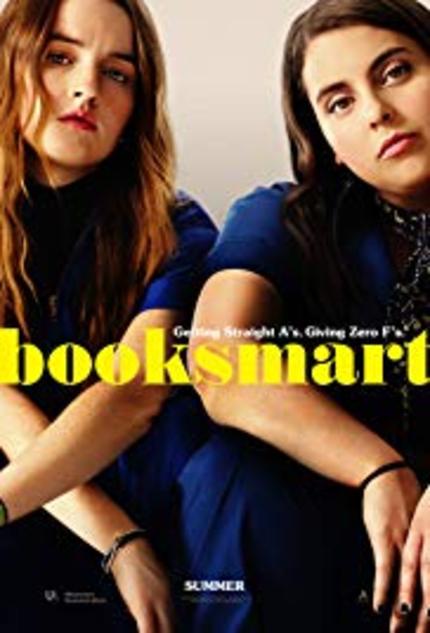 Actress/first-time director Olivia Wilde makes an impressive debut behind the camera with her resourceful and insightful feminine teen coming-of-age comedy Booksmart. Raucous, revealing, riotous and keenly cynical, Wilde's refreshing take on the growing pressures of liberating femininity and over-achieving high school academia in the age of the Me Too Movement for the suppressed female voice is a smart, observational mixture.

Thankfully, Booksmart continues the cinematic trend of showcasing the authentic angst, anxieties, and anticipation of young girls (in this case intelligent ones exceeding all expectations) awkwardly approaching womanhood in undefined malaise. Recent notable films such as Eighth Grade, Blockers, The Edge of Seventeen to older gems Mean Girls and Clueless have realistically captured the topsy-turvy essence of complicated female growing pains. Indeed, Wilde enthusiastically delves into the colorful intracacies of such awkwardness and vulnerabilities pertaining to her gifted on-screen high schoolers.

Whether toiling in the troublesome teen years in today's toxic climate or recollecting those tricky times from yesteryear Booksmart certainly rings true for those constantly adjusting to the triumphs and tragedies of turbulent high school existence. The survival of enduring those critical moments through educational performance, social bonding strategies, and maintaining a sense of one's individuality is crucial. Wilde's brainy girly protagonists are textured and tortured accordingly in one of the solid comedies of the year detailing such quieted turmoil or spontaneous celebration--depending on one's perspective in this shrewd showcase of tight-knit female friendship.

Heralded heroines Amy (Kaitlyn Dever) and Molly (Beanie Feldstein, little sister of actor/director Jonah Hill) are exceptionally cerebral-minded students. They achieved and accomplished the ultimate goal that every hopeful parent would want in their child--inherent brilliance and disciplined focus in the demanding classroom. For the studious Amy and Molly, their distinctive weirdness is apparent but no one can take away their talent for conquering demanding schoolwork...that's for sure. Throughout high school the well-read pair played by all the right rules as the payoff to their top-notched academic endeavors should be an automatic given to greatness in their collegiate years and beyond. There should be no regrets or disillusionment to consider, right? Think again, folks.

Both Amy and Molly get a slap of reality in their faces when they find out that their less dedicated colleagues--you know, the slackers and less serious peers--are pretty much guaranteed the same kind of valued education at top Ivy League colleges despite not having put in the earned work. While Amy and Molly busted their brains studying and preparing for greener pastures scholastically the party-hearty bunch just chilled and had no worries in the world. Where is the fairness in these average and aimless students registering on the same leveled playing field as the devoted Amy and Molly? Clearly, the brainiac girls feel betrayed by their studying ethic. Was getting straight A's worth the effort? Did their fellow frolicking classmates get the last laugh?

The Yale University-bound/high school president Molly and acknowledged lesbian Amy want some instant retaliation for all the SAT cramming and excess learning that was wasted from their standpoint. So what is the tandem's solution for making up for the lost time of not getting loose and wild? According to Amy and Molly if you cannot beat them then why not join them? Hence, the girls decide to let their hair down a bit and overdose on some high-flying fun and frolic the night before graduation. Hard work in hitting the books should be rewarded by empty-minded play. After all, bookworms Amy and Molly are entitled to an edgier life of leisure as well, correct? Hopefully, the upcoming debauchery-themed high school party will be the ideal venue where the detached duo can claim some much-needed clout to overdue outlandishness.

Inevitably, Booksmart will be aptly nicknamed the "female-led Superbad". Fittingly, Dever ("Short Term 12") and Feldstein ("Ladybird") make for convincing geeky feminist misfits whose full completion from sheltered glorified grade goddesses to party-going wayward wonders is a full circle turn that is infectious. Wilde and her team of screenwriters sharply capture the comedic imprisonment of their leading lasses with energetic, off-kilter aplomb. Dever's Amy and Feldstein's Molly are as equally ravenous and curious about their devotion to books as they are in the redemptive mode to explore the foreign world of uninhibited naughtiness. Importantly, Wilde instinctively juggles the revolving doors of insecurities, entitlement, alienation, and inadequacies to serve as a foundation for the girls' off-the-cuff awakening.

Booksmart incorporates a nutty nightmare that should be relatable to young women--overachievers and underachievers alike--willing to recognize the entire scope of their purpose. Additionally, the frenetic proceedings are elevated by robust performances including the breakout Billie Lourd as Gigi, the boat-jumping party-girl with a penchant for drug-addled treats. Oddly touching, slightly bizarre and cheeky, the dorky dolls Dever and Feldstein do their hilarious homework based on Wilde's engaging lesson plan.

Do you feel this content is inappropriate or infringes upon your rights? Click here to report it, or see our DMCA policy.
academicsBeanie FeldsteinBooksmartfun and frolichigh schoolKaitlyn DeverOlivia Wilde