Sarasota 2019 Review: FERAL, The Space Between the Tunnels and the Light 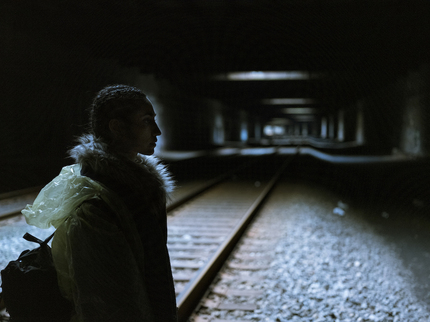 There are as many stories of how and why someone becomes homeless, as there are homeless people. Sometimes we ignore them, sometimes we give them some money; there are organizations that help, or that we tell ourselves help. Do we think very much on where they go at night, if they are not visible? What are the spaces they occupy, when they are not allowed to occupy ours? What is their culture? And what about the loneliness that envelopes them when they spaces they do occupy are transient and dangerous?

Screened out of the Sarasota Film Festival, Feral, Andrew Wonder's narrative feature directorial debut, tells one woman's story, a story both filled with beautiful imagination and painful reality of her individual journey, one of both attempted progression and constant pushback. With a minimalist yet powerful script co-written with Priscilla Kavanaugh and Jason Mendez, and an incredible central performance by Annapurna Sriram) it examines issues of homelessness through a lens of experimentation in both narrative and documentary styles, painting a heartbreaking and at times heart-lifting story.

Yazmine (Sriram) lives on the streets, or perhaps more specifically, in the tunnels under Brooklyn. Her mother was deported when she was a teenager, and Yazmine has no idea where she went or how to find her. Suffering from trauma and isolation, Yazmine wanders the streets and parks, looking for food, shelter, a friend; sometimes she steals, sometimes she makes a friend, but most of the time she's just trying to survive and keep her sanity intact, in a world that makes it quite clear it has little use for her other than what it can take. But a blizzard is coming, safety is a luxury, and everywhere she turns, even those who help might be asking too much of her.

The film is both a series of vignettes and a linear narrative that focuses on a few days in Yazmine's life, both typical of both the constant dichotomy of joy and pain, and how Yazmine finds tools to survive. In Feral, the tunnels provide a safe space, though of course they seem anything but safe: filled with refuse, the danger of passing trains and rats, cold and dampness; but this is also where Yazmine can find her security, with the objects she acquires, and her few vital possessions which she keeps stashed away. This is interspersed with some exposition in the form of a video interview, which both gives us the bare facts that we need, and allows the rest of the film to fill in the blanks of Yazmine's existence and how she copes. Wonder takes full advantage of these strange underground spaces, which are at once frightening and understandably a place of a certian kind of safety for someone who is alone.

Sriram's performance is exceptional; she completely embodies Yazmine, in her moments of loneliness, self-entertainment, brutality, pain, and brief moments of joy. We never doubt her completeness as a character, even if our view of her ranges from sympathy to anger to laughter. We are with her when she steals from a young man who is expecting too much, or when she just needs to take the subway but has no money, or when she reaches out for friendship with a young mother; we understand her trepidation when yet again, someone is offering help that will likely lead to nothing.

Yazmine is not just a woman living on the streets, but a woman of colour, and therefore especially vulnerable to various forces. This is not to say that she's an angel; she commits petty crimes, can be aggressive. But how much is that a product of her personality, and how much is it a product of the environment she is forced to live in? Maybe at times she seems 'crazy': she talks to herself, she has has bursts of anger. But then, her anger is justified by how she is treated (in a highly realistic and horrifying moment, when she is accousted by some white guys who treat her as they do precisely because she is a homeless woman). It's hard not to feel her every moment in your mind and heart.

Feral is a strange and powerful tale of one woman's struggle to survive, the people she encounters and often must endure, the connections she tries to make, and how the system seems to be designed to keep her isolated unless she conforms or makes too many sacrifices.