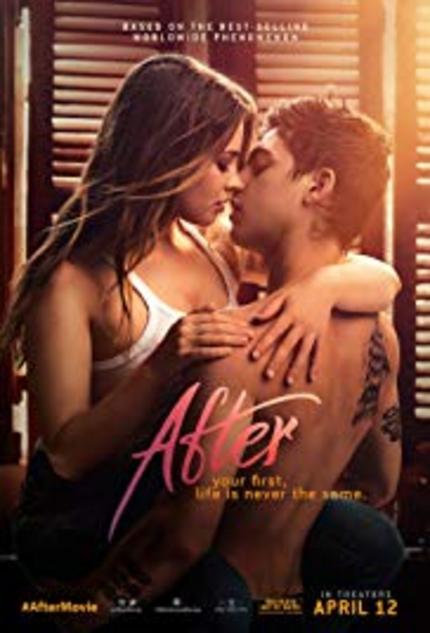 There is nothing wrong with exploring the sexual awakening of a goody two-shoes college-bound bookworm beauty whose hormonal teen years were spent mildly untapped while trapped within a vanilla-coated high school relationship. Of course, what would be wrong with this particular premise is if it turned out to be just another arbitrary toothless, tawdry-challenged teen soap opera that seems chewy in titillation but ends up registering as a notable bust.

Unfortunately, co-writer/director Jenny Gage's tepid teen romancer After plays it safe and never elevates this youth-oriented, pseudo-steamy sudser beyond its pedestrian pauses of passion. The intriguing notion of a good girl breaking out of her Barbie Doll bubble in an effort to wallow in the dark side of a lusty co-existence with a questionable stud characterized as a corruptible heartbreaker is wasted on yet another conventional conception of formulaic teen tart romances.

Gage ("All This Panic") has a proven track record of lending credible insight into the uncertainties of teenage girls and the surrounding dysfunction that embodies their tainted lives. However, Gage and her handful of fellow screenwriters do not take much liberty in shaping and fortifying the sluggish After with something more concrete and daring in its thematic urgency. Sure, the curiosity to walk on the wild side for a young girl bursting into womanhood is pretty much the familiar foundation for countless vehicles that mimick this saucy sentiment. However, After never really materializes into anything resourcefully scandalous or perceptively scathing in its bid for the film's deflowered diva to channel her devilish desires. Instead, Gage and company opts for the typical tease of a collegiate hook-up that would not be worthy of a soggy Nicholas Sparks novel.

After benefits from a colorful backstory as it is based upon the Anna Todd best-selling novel. Also, it is noted that "the college cutie-meets-the-hedonistic-hunk" scenario was inspired by British band One Direction fan fiction. Indeed, it is an inexplicable head-scratcher as to why the anemic amorous wrapping of After is not as provocatively charged as the imaginative sources the film derives from so disjointedly. Relentlesly tiresome and tedious, one has seen this slushy session of teen sexual angst numerous times before, folks.

Fresh out of high school, Tessa Young (Josephine Langford) begins her freshman year in college. She is pretty, bright, and ambitious in her studies. She leaves behind a couple of supportive loved ones in caring mother Carol (Selma Blair) and doting high school boyfriend Noah (Dylan Arnold). In any event, Tessa gets situated at the college as she meets her two distictively offbeat dorm mates Steph and Tristan (Khadijah Red Thunder and Pia Mia). The welcoming pair want to show Tessa around but she wants to focus on her academic work. Obviously, Steph and Tristan feel that college life on campus is just more than hitting the darn books...something that Tessa may slightly disagree with convincingly.

Soon, Tessa's concentration will shift when she meets the rebellious Hardin Scott (Hero Fiennes Tiffin). The tattooed English rogue Hardin is a bad boy not conforming to his academic expectations. The added burden on the moody shoulders of Hardin is that he is also the son of the school's chancellor--another reason for the caustic cad to check out both academically and emotionally. Consequently, Hardin is the resident rebel without a cause on campus. Predictably, the well-grounded Tessa is fascinated and intrigued by the T-shirt-wearing brooding Brit. Tessa will eventually come to the realization that Noah back home--although very accommodating and attentive--just does not challenge her heart as much as the wounded Hardin glistening with adversarial charm and mystery.  The cliched writing is on the wall for the collegiate junior-sized Mary Poppins and James Dean wannabes...opposites do attract. Oh yeah...how about the one where the unattainable chicks always seeming to want the confirmed bad boys?

Disappointingly, After merely skims over its intended purpose to unravel the hypnotic hold that devilish dudes such as Tiffin's Hardin possess over Langford's the-girl-next-store Tessa. Both Langford and Tiffin are criminally attractive so there really is not a mystery as to why this photogenic tandem would not be drawn to one another physically? Where Gage misses her mark is adequately conveying the struggles of the psychological malaise embedded within Tessa. Clearly, the film could have benefited from the undefined psychosexual tension existing in conscientious Tessa's psyche. But the film lacks depth and strictly wants to swim in the confines of a synthetic teen romancer while only awkwardly hinting at its targeted sexual ribaldry. The boldness of eroticism in the spotty script is watered down for numbing montages, annoying pop tunes, and the occasional need for Tessa and Hardin to slobber over one another without any true conviction or calculated chemisty.

Both Langford and Tiffin make for a seductive item that the young demographic audience will undoubtedly find exhilarating courtesy of a generous dash of Twilight-esque twitches in spirit and soul. It is too bad that the misguided material never allows them to tap into the meat of the carnal conflict in question. When the thin smoking mirrors are removed After just lingers on as another YA-themed dispiriting dud trying to capture the mawkish attentions of its fingered crowd.