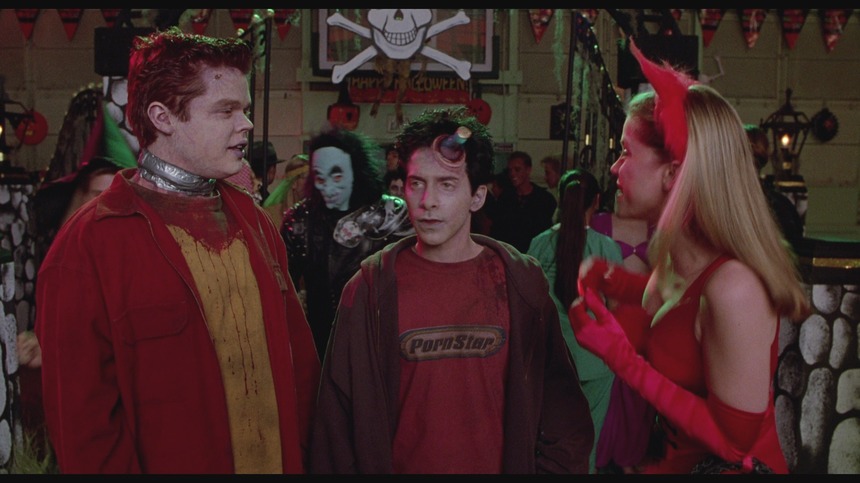 Fans of bloody mayhem in Chicago have an event to look forward to! The second annual Windy City Horrorama will take place on the weekend of April 26-28th at the Davis Theater and the lineup is a combination of genre festival favorites and low budget splatter that is sure to have something for everyone. Among the events taking place is a 20th anniversary special screening of Rodman Flender's cult classic Idle Hands, a personal favorite of mine.

Tickets are available now in a variety of shapes and sizes from full festival passes, to day passes, down to individual film passes. Check out the lineup and a quick sizzle reel of the films at the bottom of the page, it looks like a lot of fun!

Check out the details and full lineup below:

April 1st, 2019 | Chicago, IL— The wait is over, film freaks! Windy City Horrorama is proud to present our full slate of films blowing into Chicago this month!

First up is the 20th Anniversary screening of the 1999 zombie-stoner-comedy, IDLE HANDS, starring Devon Sawa, Seth Green and Jessica Alba! When a slacker’s demon-possessed right hand kills his two best buddies, the duo returns to life as wisecracking ghouls who turn the teen’s Halloween plans upside-down. Join us and director Rodman Flender (in the flesh!) in celebrating this nostalgic slice of undead Gen-X hilarity!

Horrorama is also thrilled to be hosting the Midwest Premiere of BLOODLINE. This sleek, gory thriller features American Pie funnyman Seann William Scott in an unexpectedly dark turn as a new father who takes the duty of protecting his family to wicked heights. Director Henry Jacobson and Co-Writer Avra Fox-Lerner will be in attendance!

And Windy City Horrorama’s continued dedication to celebrating the spirit of the Midwest continues with STRAIGHT EDGE KEGGER-- a punk-rock slasher featuring music and appearances by Chicago bands--and a block of shorts made in and around our fair city!

These kickass screenings join our already-announced centerpiece showings of ROBOT NINJA and THE RUSALKA* and many more in making this festival a can’t-miss event for genre fans in Chicago and beyond. There will be plenty more to see, do, and imbibe when Horrorama takes over the Davis Theater this month (with plenty of exclusive food and drink specials to enjoy all weekend, courtesy of the Carbon Arc and Pipeworks Brewing Co.), so be sure to peruse the full schedule on our website and grab your passes soon: they’re going fast!

*presented with support from the Chicago Cinema Society

Antrum: The Deadliest Film Ever Made

Antrum: The Deadliest Film Ever Made assembles cinema experts and documentarians to explore the phenomenon of a long-lost “movie that kills…” then dares you to watch it! Is Antrum the real deal? An elaborate hoax? Only the bravest viewers will survive long enough to find out...or will they?

Smarting from her recent novel’s lukewarm reception, crime writer Robin Richards travels to a remote Swedish farm seeking repose and inspiration. She soon learns that fact is indeed stranger than fiction when’s she’s targeted by a killer more unhinged than she could think up in her own wild imaginings.

Becoming a father for the first time can be quite an adjustment. Evan takes protecting his little family to the next level with a wicked temper and a few too many late night drives. Seann William Scott’s fierce performance in this sleek, gory thriller is a promising look for darker roles to come.

One year after the tragic death of ball-busting supermodel Alexis Carpenter, the world of haute couture is flooded by her memory. Plans to commemorate her death unravel at the seams as models and industry heads meet their sinister fate at the leather-clad hands of a vengeful killer. This moody giallo send-up is a perfect 1985 flashback with plenty of bitchy attitude.

Despite hanging up his boots following the events of The FP, JTRO must return to the blood sport of Beat Beat Revelation one last time. JTRO teams up with his mystical hype man, KCDC,

and heads into The Wastes, a land destroyed by the Beat Wars. JTRO must train hard to face off against AK-47 to become champion in the ancient tournament, Beats of Rage, and save their post-apocalyptic existence.

Seven-year-old Chloe spends her days drawing, daydreaming of ice cream cones, and begging her father to let her outside of their dilapidated house. When dad’s sleep deprivation peaks, Chloe sneaks out, meets the very odd Mr. Snowcone, and quickly learns that the rest of world is terrified of the freaks living among them.

A medieval warrior's gruesome collection of heads is missing only one—the monster that killed his daughter years ago. Presented with support from the Chicago Cinema Society.

When slacker teen Anton Tobias has his right hand possessed by a demonic force, Halloween festivities get a lot more interesting. His hand proves to be an appendage of death, killing his two best buddies who return to life as wisecracking zombies. To make teenage matters worse, Anton's evil hand significantly hinders his chances with the girl next door.

Convinced he has found the perfect subject of his next novel, Ernesto Navarro investigates a string of murders that mimic the crimes of Zacarias Ortega, a bloodthirsty serial killer obsessed with immortality. As he learns more of detective Jeremias Morales’ run-ins with Ortega throughout the 1970’s, it is clear that Navarro has entered a twisted game that few have managed to escape.

A gamer accepts a challenge to play the scariest game ever on his live feed, only to discover that his actions in the game have real-world consequences.

Pedro awakens to discover that his world has turned into an irradiated hellscape and teams up with Maria, a soldier, to contend with the gay rapist hobos, Fallout-style super freaks, and parasitic wrist rodents that inhabit the wasteland. This whacked-out, apocalyptic buddy comedy gets the Troma seal-of-approval for gut-busting bad taste.

If Dario Argento and Sam Raimi crashed a Christmas party, it might look something like this suburban spookshow. When a thieving babysitter’s scheme is upended by a trio of body-hopping witches, she enlists the help of her hapless partners in crime and the schlubby paranormal “expert” next-door to protect her bratty charges.

Rescued from the depths of trapped-on-VHS hell, this 2k restoration was lovingly resurrected for its 30th Anniversary. A comic book writer assumes the identity of the hero he created in order to clean up the mean streets of Akron, OH. This shot-on-16mm cult classic will delight fans of dark superhero movies like Robocop, Super, and Kick-Ass.

Perry Blackshear reunites with his They Look Like People (2015) cast for this tale of a folkloric water spirit, the vengeful man hunting her, and the handsome stranger caught between them. Stuffed to its gills with doomed longing, The Rusalka is an atmospheric elegy for love touched by the cruel hands of fate.

Brad is tired of James and his borderline psychotic intensity when it comes to representing the straight edge lifestyle. When James catches wind of Brad’s departure from the scene, he and his fellow straight-edgers track down the nearest house party and ascend into a full-on massacre. Grab your Solo cups because the keg flows red in this punk-rock slasher.

When a wide-eyed man of God is given the power to transform into a carnivorous Dinosaur, he joins forces with a hooker/doctor/lawyer to clean up the streets and take on a brotherhood of evil ninjas. The Cretaceous and clergy collide in this B-movie send-up that’ll leave you roaring!