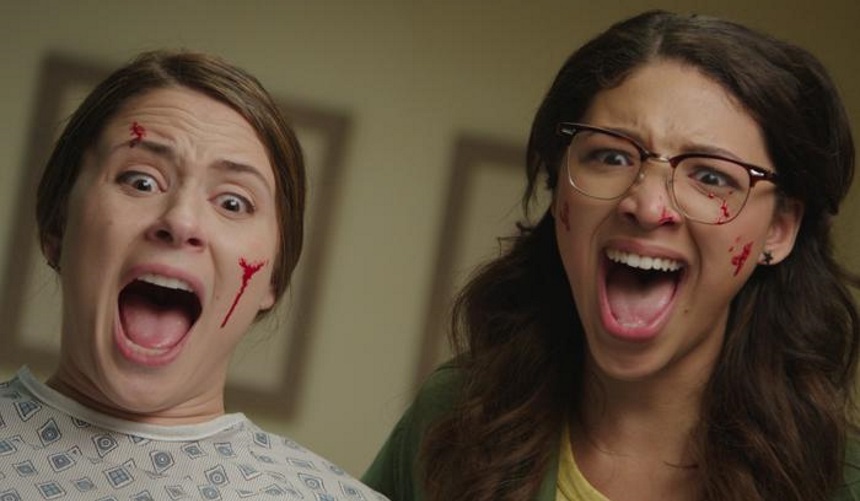 A young woman's coming of age has a body count in Stephen Cedars, Benji Kleiman, & Scott Yacyshyn's Snatchers. The trio wrote the film as a limited web series back in 2015, which then went on to a premiere at 2017's Sundance film festival as a part of the episodic entertainment strain, and now finds itself recut into an impeccably paced feature film at this year's SXSW film festival. Directed by Cedars and Kleiman, Snatchers is a keen observation of adolescent interpersonal politics and killer vagina jokes that is sure to entertain fans of both smart and dumb horror comedy in equal measure.

Sara (Mary Nepi) is a status obsessed high schooler who has recently found maneuvered herself to be a member of the “in” crowd. The next step in her ascent to the heights of teenage popularity is to regain her ex-boyfriend Skylar (Austin Fryberger), and the only way to do that is to give up her virginity and give in to his ridiculously overactive sex drive. One very uncomfortable night of bad sex later, she finds herself back in his good graces, and mysteriously nine months pregnant, a conundrum she did not expect.

Big as a house and confused about the impossibility of her current situation, Sara contacts her old nerdy friend Hayley (Gabrielle Elyse) to help her figure out what the h-e-double hockey sticks is going on. Sara abandoned Hayley in her quest for post-pubescent glory, so there is a tension between them that is palpable, however, seeing her oldest friend in a particularly sticky situation moves Hayley to action and the pair find their way to a doctor. Unfortunately for the human race, Sara's situation quickly becomes more grave as she gives birth to some kind of bloodthirsty alien crustacean intent upon taking over the world, and it's up to Sara and Hayley to prevent that from happening.

Snatchers is a big bundle of gooey fun that never takes itself too seriously, but also doesn't allow the inherent feminist doctrine that “the personal is political” escape its grasp. Though the film was written and directed by men, the story is laser focused on the stories and lives of young women asserting their sexual power and finding ways to use their femininity an ability to reason to solve the potentially world-ending crisis at hand.

The creatures that seem intent upon taking over the world act as surrogates for the rampant hormones that often lay low teenagers who are subject to the whims of their surges. These alien invaders take over the bodies of anyone they come in contact with and use these human hosts as a way of not only defending their own sovereignty, but also perpetuating their species through indiscriminate humping, an urge human teens know all too well. In this way, the film says far more about its subjects than it perhaps even intends to at times, but still manages to pack its run time with enough goofy gore gags and big laughs to keep its core audience amused.

Hardly some kind of high-falutin' heady elevated horror film, Snatchers is full of absurd gore and enough dumb gags and phallic jokes to fill the proverbial bag of dicks, but the more astute audience will likely find a little something extra to connect with, given a bit of digging. Nepi and Elyse play off each other marvelously well, and I couldn't help but be reminded of a younger Jenna Fischer and Maya Rudolph, who would undoubtedly have taken these roles twenty years ago.

A film for fans who don't mind a few laughs punctuating their gore gags, Snatchers is definitely a crowd-pleaser that will have horror fans rolling in the aisles. Apart from a questionable plot detail about the insidious alien presence coming from Mexico – I'm sure you can hear my eyes rolling from here – Snatchers is a big ball of fun that is sure to get horror lovers' attention whenever it finds a release in the States.