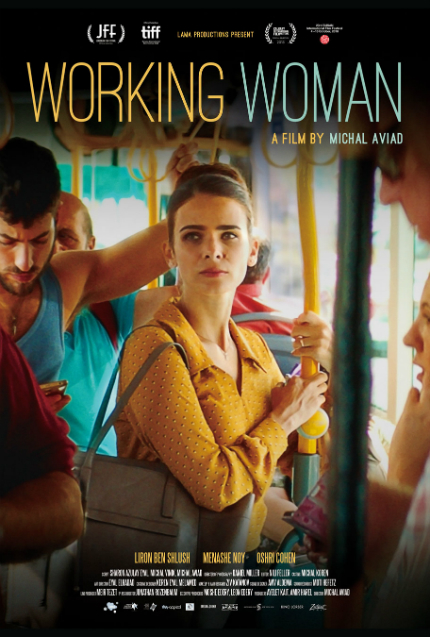 All appears tranquil on the surface.

A devoted wife and mother of three young daughters, Orna (Liron Ben Shlush) is eager to start her professional career in earnest. She helped her husband (Oshri Cohen) get his new restaurant off the ground; their children are all in school; now seems like the perfect time.

Orna lands a job with a real-estate developer that sounds very promising. Oh, she won't be paid at first, and she is expected to be available at all hours of the day and night to fulfill her role as an assistant, but she is determined to prove her worth and move up in the business.

Her husband is apprehensive, but he is so busy with his restaurant, he scarcely has any time for her, anyway, much less their children. Orna's mother is willing to help out and so Orna plunges ahead. Her steady, uncomplaining work ethic impresses her new boss, Benny (Menashe Noy), and Orna is encouraged when she is hired on as an employee.

Her hours and responsibilities only increase, and her husband mutters complaints about the time he must now spend caring for their children. And then there's the increased time Orna is spending with Benny.

A middle-aged man of stocky build and average appearance, Benny is married, but he also tends to invade Orna's personal space. After their work concludes for the day, he wants Orna to accompany him to restaurants or bars; when they work late, he buys dinner for them to eat together. His manner makes her increasingly uncomfortable, especially with the memory of an unwanted kiss in mind.

Or attempted kiss. In "celebration" of a business deal, Benny endeavored to embrace and kiss Orna. It was clear what he wanted, and Orna strongly resisted, announcing clearly that she had no personal interest in Benny beyond their business relationship. And yet Benny persists, even as Orna resists.

A sad, sinking, fatalistic feeling quickly settles into Working Woman after that encounter. Orna wants the job and soon enough needs the job, because her proud husband's new restaurant begins to experience cash-flow issues. Orna has built walls around herself, to protect herself, but Benny continues chipping away at them. Orna just wants to focus on her job and her family, but Benny ...

Orna is a strong woman and she believes she can handle her own challenges, without the help of any man. Her husband is too preoccupied with his business troubles to take an active interest in his wife at the moment -- which has stretched into months -- leaving Orna to her own devices. Benny is a widely-admired professional, beloved by his other employees and admired for his business acumen. He is also physically stronger than Orna.

Burrowing under the skin, director Michal Aviad achieves maximum discomfort, and then digs deeper. Working a script credited to herself, Sharon Azulay Eyal and Michal Vinik, Avid never hurries. Primarily a documentary filmmaker with one previous narrative feature (Invisible) to her credit, Avid demonstrates keen empathy and understanding of the situation, which eventually becomes all-consuming for Orna.

Liron Ben-Shlush is outstanding in her performance as Orna. She brings many subtle graces to the role, as a woman who is loving and loyal to her husband and children, and yet trapped by a contemptible man who knows very well what he is doing, abusing his power and pretending otherwise.

It is infuriating; frankly, this fictional account left me shaken and disturbed, which is only a taste of what far too many women have been forced to endure, around the world, for months and years and decades and centuries. It must stop.

Working Woman will open on Wednesday, March 27 at the IFC Center, Marlene Meyerson JCC of Manhattan; in Los Angeles, it will open on Friday, April 12 at Laemmle's Royal, Town Center, and Playhouse. For additional cities and information, please visit the official site.

Do you feel this content is inappropriate or infringes upon your rights? Click here to report it, or see our DMCA policy.
IsraelLiron Ben ShlushMenashe NoyMichal Aviad