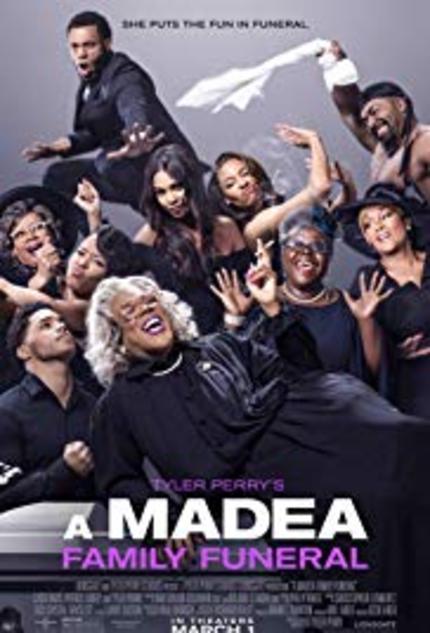 From the humble beginnings of a stage debut over two decades ago to the lasting power on the big screen a number of years later the final farewell is supposedly set: the gray-haired, Georgian gun-toting granny with the over-sized glasses known as the sass-spewing Mabel "Madea" Simmons is making her last hurrah...at least according to her creator/portrayer Tyler Perry anyway.  And so the shallow shennanigans are concluded in the fetid frivolity continuously known as Perry's safe go-to movie meal ticket in the toothless highwire act Tyler Perry's A Madea Family Funeral. No doubt the casket-filled clownery in Funeral will satisfy those that faithfully stuck with Perry's tired Christian-themed madness and mockery that gave inexplicable longevity to the Madea wave of flimsy pop cultural lunacy.

Predictably contrived and laced with lazy flippant humor, the familiar strained components pertaining to Bible-toting rhetoric, rambunctious and unapologetic life lessons, silly-minded law-breaking and law-bending tendencies--all are on display as Perry's garralous grandma flexes her usual absurdity to the eye-rolling limit. After eleven Madea entries it is rather a boorish affair repeating how disgraceful this soapdish of a foul-mouthed costume party has become that paved the way for Perry's lavish bread and butter earnings. Why worry about the relentless stereotypical nonsense or the bothersome imagery that Perry and his avid followers blindly abide by without question?

As with any Perry-related pet project regarding his hulking housedress-wearing hussy Madea, the mindless and raucous comedy fused with numbing melodrama is what fuels this manufactured drudgery. Unlike her previous homespun hedonism that included misadventures in jail, at Christmastime and Halloween, job-seeking, and enduring family reunions (among other things) Madea and her bunch encounter the concept of a happy ending--or hapless ending as only Perry's cross-dressing cut-up and clan know how to do so chaotically. You guessed it...the wackiness into the realm of the family funeral.

This indigestible slapstick soap opera finds the amateurish entanglement concerning a hotel-bound Madea, womanizing Uncle Joe and sensible nephew/attorney Brian (both played by Perry) as well as tag-a-longs Aunt Bam and Miss Hattie (Cassi Davis and Patrice Lovely) as they head to meet and greet relatives Vianne and Anthony (Jen Harper and Derek Morgan) celebrating their 40th anniversary together. Seemingly, Vianne has an ideal marriage on the surface but this deception will prove otherwise as Anthony's salacious adulterous dalliance with Vianne's best friend Renee (Quin Walters) will result in him succumbing to a fatal heart attack.

Naturally, Madea and company prepare for Anthony's funeral as the eccentric nature of the sordid family business unfolds. The exaggerated craziness starts to unravel amongst the dysfunctional familial crew. Does Vianne actually know what took place at the Atlanta hotel regarding her cheating hubby's demise? Conveniently, Madea and bunch know about the toxic tryst that occured but this particular hotel will house more ridiculous ribaldry. Will the unctuous Uncle Joe ever filter his uncontrollable mouth and seedy-minded actions? Does Vianne's older son A.J. (Courtney Burrell) have an affinity for his dead daddy's sexual affair habits as he enjoys bed-hopping with his baby brother's fiancee Gia (Aerial Miranda) in that same hotel?

As filmmaker, Perry pours it on thick in an already cluttered comedy reaching for recycled zaniness. Stand-by jokes concerning Viagra and coffin-closing difficulties at the funeral look for a riotous, cheapened smirk. Another rehashed rib regarding the late Anthony's legions of women turning up as mourners at the funeral service is supposed to provide an instant chuckle. Meanwhile, there is a flashy Baptist-themed/gospel flavor to accompany the pesky proceedings. Oh yeah...let's not overlook the labored hilarity involving older people and their constant peeing problems.

As though there are not enough glorified embarrassing cartoonish caricatures situated in the insufferable A Madea Family Funeral, Perry becomes overbearing in his generosity by showcasing additional cringe-worthy characterizations portrayed by him. Perry gives lackluster life to the likes of Madea's and Joe's cousin Heathrow, an amorous amputee speaking through an electrolarynx device as among the strained off-kilter personalities paraded around so aimlessly. Also, there is a padded on cameo featuring boxing anomaly Mike Tyson included for questionable star power.

Perry never misses a beat in overseeing a disjointed display of misplaced comical chaos bogged down by watery sentimentality, toothless social commentary, ragtag religious-minded revelations, and disposable characterizations dumbfounded in solid banality. Perry will abandon the acidic-tongued Madea once and for all. But one can never say never when foolishly contemplating making another big Madea screen appearance in the immediate future. After all, Perry's on-screen Southern money-making, motor-mouthed marm is too profitable to stay quiet and content away from the swaggering spotlight forever. Perry...we beg you--stop the inane gimmick and allow Madea to retire in her flowery bloomers in peace.

Do you feel this content is inappropriate or infringes upon your rights? Click here to report it, or see our DMCA policy.
funeralsGeorgiaMadeasequelsTyler PerryTyler Perry's A Madea Family Funeral