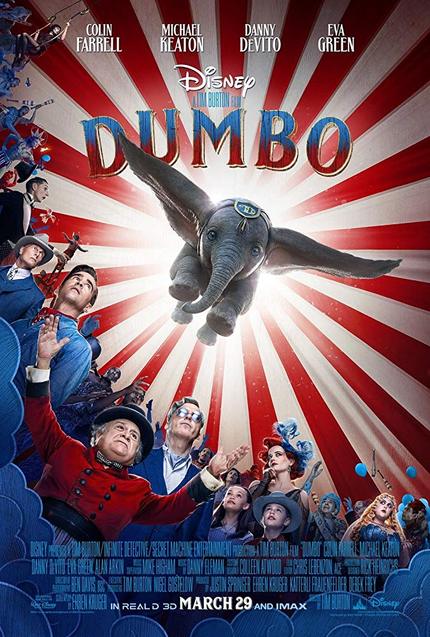 Flying high among the pack of the recent spate of Disney’s live-action adaptations of its own Animated Classics is Tim Burton’s new take on one of the very first, 1941’s Dumbo.

No less than seventy-eight years young, the original Dumbo boasts the distinction of being the fourth of only five animated features that Walt Disney himself had an active day-to-day interest in creating; the others being Snow White and the Seven Dwarves [1937], Pinocchio [1940], Fantasia [1940], and Bambi [1942].  Of those, it is the first to be given the popular live-action treatment that the company has gone all in for today.

Just over exactly nine years ago, macabre/mainstream master filmmaker Tim Burton put this particular remake train in motion.  The movie was 2010’s Alice in Wonderland, a gawdawful garish 3D misfire that owed its box office success to its immediate piggybacking on the stereoscopic revival launched by James Cameron’s Avatar only months earlier.

While Alice proved to be a live-action remake in name only (actually it’s a newly concocted sequel to Disney’s animated 1951 Lewis Carroll adaptation), it was enough to inspire the studio to continue mining its catalog.  Maleficent (2014) also deviated from its source, the sublime Sleeping Beauty (1959), though far less radically.  Soon enough, straight-ahead big-budget high-profile Disney remakes would become ongoing staples at the multiplex: Cinderella (2015), Beauty and the Beast (2017) and The Jungle Book (2016), with Aladdin and The Lion King just around the corner.

Being that the animated Dumbo clocks in at a scant sixty-four minutes, it’s to be expected that this 112 minute retelling has added quite a bit.  It wisely holds onto the persevering iconography of the original film (the song “Baby Mine” is sung around a campfire by Sharon Rooney; “Pink Elephants on Parade” gets the orchestral treatment courtesy of Danny Elfman, albeit in an alcohol-free and considerably less hallucinatory realization) while branching into new, if narratively tepid directions.

Per the film’s credits, this Dumbo, as written by screenwriting veteran Ehren Kruger, is based upon the novel by Helen Aberson and Harold Pearl, bypassing the previous adaptation’s Joe Grant/Dick Huemer screenplay.  Per the fact that the novel in question is apparently so obscure that it has neither a Wikipedia page or availability on Amazon, there’s no reasonable way to know just how loyal this new film is to the book.

Does the book have human main characters, with Dumbo relegated to a prominent supporting role?  If so, this film is more loyal than its predecessor.  As it stands, the centrality of Dumbo himself is the primary difference between this and the 1941 version.  In the animated version, the movie is happening to Dumbo. In this version, he’s happening to the movie.

It’s 1919, and Holt Farrier (Colin Farrell) is returning from The Great War sans his left arm.  This physical brokenness spells trouble for his career as a performer in the Medici Brothers traveling circus, though it’s his broken spirit that’s most troubling for his two young children, Milly (Nico Parker) and Joe (Finley Hobbins).  While Holt was away, his wife died, leaving the kids in the care of their surrogate circus family.

Traveling by train to who-knows-where, pitching big top, promoting the event, continuously training, and finally performing without incident over and over and over is a challenging life for anyone, particularly for children not inclined to the lifestyle.  Yet, in true Disney fashion, these kids have only become the better for it.  And now that their dad is back, they can be their own family again.

But, their dad has to find his place all over again.  Fortunately, circus master Max Medici (a welcome Danny DeVito) has recently acquired Jumbo, a pregnant elephant.  (Gone is the 1941 version’s stork delivery, not to mention that film’s anthropomorphic mentor figure, Timothy Q. Mouse, and the racially questionable murder of crows).

Surely her bouncing baby pachyderm will be a lucrative draw- and someone will be needed to manage the little guy.  Except, of course, baby Dumbo is born all ears.  Sooner than later, though, the kids discover that a simple feather can work a kind of high flying magic.  Dumbo the Flying Elephant quickly becomes a must-see attraction.

Enter Michael Keaton, one of many Tim Burton “stock company” actors congregated in this film.  Keaton is having a hammy ball in his role as a wealthy eccentric owner of a lavish Tomorrowland-style circus theme park.  Though Keaton’s whackadoodle  performance has been criticized by others, it could be pointed out that if an over-the-top Jack Nicholson-esque presence stretches plausibility, then best to not even consider Dumbo’s ear-flapping gift of aviation. (The reuniting of Keaton, DeVito and Burton in a circus setting makes for an amusingly re-kiltered Batman Returns).

Keaton’s character, along with fellow Burton alums Eva Green and Alan Arkin, absorbs the entire Medici Brothers crew, granting them stability and permanence for the very first time.  It’s all to acquire Dumbo, who is only performing in hopes of earning enough money to buy back his mother, who’s been sold away.  But naturally, a true deviousness lies lies just beneath the surface of a gleaming, magical kingdom such as this… 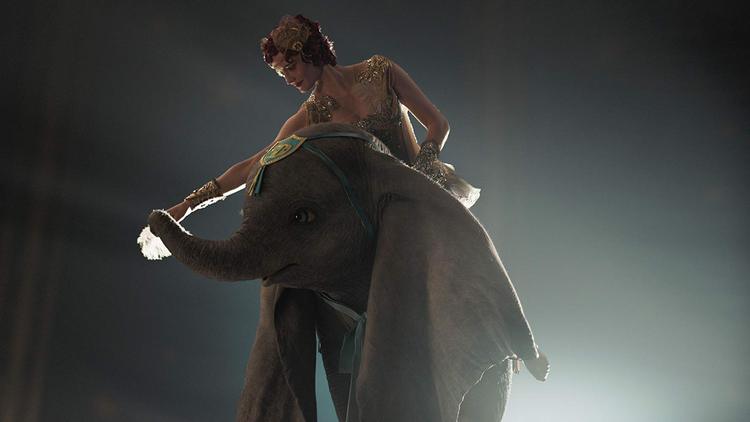 For Burton, Dumbo isn’t career defining nor career defying; rather, it’s comfortably career encapsulating.  Having been prominent in the game for nearly thirty-five years, the filmmaker is now at that point where he’s got nothing to prove, and is perhaps looking to take stock.

His unmistakable design sensibility is prominent, particularly in the newly imagined portions of this version.  Burton’s long-established acumen for visual effects truly pays off in the form of his digitally rendered title character.  This Dumbo is true to classic form, with his flight-enabling ears and round, emotional blue eyes; as far as one could get from the CGI lethal intergalactic pranksters of, say, Burton’s Mars Attacks!.

Like Scorsese with Hugo, Dumbo is Burton’s one and only truly earnest kids-centric picture.  Lurking nowhere is his usual sinister edge or macabre sensibility.  It allows the heart of the story to be elevated, and given real credence.  Such true and unguarded sensitivity has been a struggle for Burton throughout his career; at age sixty, he’s finally embraced the freedom to let his guard down.

Whereas most filmmakers’ softening with age plays outs as rather lame, or at least dull, this turn for Burton is a long time coming.  Here, of all places -- in the stead of his original employer (Disney, when he was a mere animator out of CalArts), making one of their brand recognition-fueled tentpoles -- he’s finally come upon a deeper maturity.

Like its 1941 namesake, Dumbo is a film that makes you feel things.  In this case, the abandonment experienced by Dumbo is compounded in the story of the Farrier family.  Emotional and physical abandonment lurks and lingers in their immediate pasts, and in their present lives.

Amid that necessary core, though, the film is a fantastically confident and colorful bit of low-stakes entertainment for all ages.  Dumbo, though not the same, is a great feather in the cap of its backer, its crew, it’s performers, and its ringmaster.

Do you feel this content is inappropriate or infringes upon your rights? Click here to report it, or see our DMCA policy.
Danny DeVitoDisneyDumboEva GreenMichael KeatonTim Burton