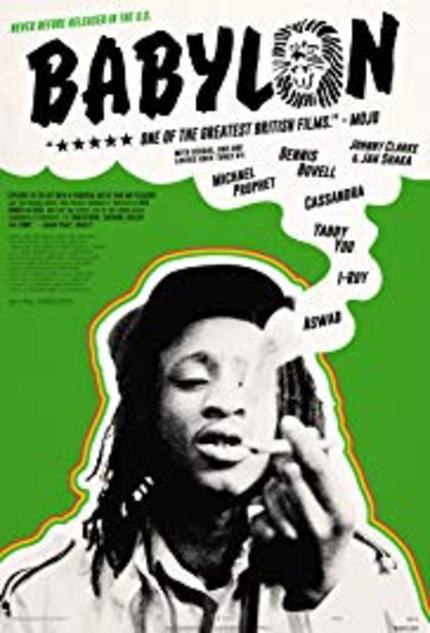 Nearly four decades ago when it was originally released co-writer/director Franco Rosso's explosive British musical drama Babylon tapped into the complicated mindset of a different kind of youth-fueled movement saddled with incidiary overtones of racial strife and cultural intolerance. Specifically, spotlighting the prominence of dreadlock-induced indifference concerning British-Jamaican musicians enduring xenophobia scorn is the foundation for Rosso's controversial expose chronicling the heavy-handed race-related bias around South London's bombastic boundaries in the early eighties. Babylon is revealing and raw in its political and sociological spectrum in reference to racial divide, reggae music, and the underbelly of ambition to succeed within the realm of doomsday disillusionment.

Indeed, Babylon was destined to be a blistering commentary on black youth alienation upon its 1980 debut. Honest, gritty and vastly telling, Rosso and fellow scriber Martin Stellman serve up a caustic cocktail of confusion, aggravation, resentment, resistence, and ultra-turbulent attitudes during South London's tumultuous 80s-era period. The antagonistic Babylon certainly made for eye-opening, furious fodder in its heyday. Importantly, nothing has really changed in these contemporary times as fascism continues to rear its ugly head globally. Babylon foreshadowed the black youth profiling epidemic so commonly practiced. Consequently, Rosso's toxic examination of hostile waters intertwining reggae sounds and stimulating with the assimilation of ignorant South Londoners deems this vintage UK film project piercingly compelling. For the first time screened on these shores, American movie audiences will benefit from the unshakable disenchantment of the edgy film's unsettling message.

Rosso's seminal tale of neo-realist tendencies features the troubling exploits of "Toaster" Blue (Brinsley Forde from the reggae group Aswad), a low-paid auto mechanic by day and part-time sound system MC/DJ by night. Blue and his fellow working-class peers find solace in the participation of the various Rastafarian dance parties scattered throughout the region. It is the competitive nature of Blue and his Ital Lion crew to chase their dreams of becoming heralded reggae music movers-and-shakers in an otherwise dim reality of their mundane existences. The advent of menial employment (or unemployment), petty criminal indulgences, and the constant societal shunning pretty much highlights what little savored desires and anticipation of success that Blue and his artists have in store for the upcoming reggae sound face-off against main rivals Jah Shaka.

The rising adversities that Blue faces feel insurmountable at this point. It does not help matters any that his racist boss at the garage causes him to lose his uneventful job. Furthermore, stressfully co-existing in a racist city where the majority of angered white faces use tools of hatred, incivility, anxiety, and impatience to dismiss and denounce Blue and his ilk of artistically carrying out their musical expression extends the lethal malaise that these black youngsters must swallow with reluctant acceptance. Clearly, the Rastafarian lifestyle of music, customs, identity, culture--all seem rather threatening and invasive to the woefully judgmental white masses that routnely associate the Jamaican young folks as melodic menaces worthy of immediate eradication. The rejection is toxic at its deepest core.

The build-up to divisiveness is gradual and sickening. Complaining neighbors, overly opinionated and insufferable jingoistic women, unsavory cops, and lastly...terrorizing National Front hooligans committing heinous acts against Blue and his bunch creates a horrific hailstorm of marginalized mayhem. Babylon is not entirely a hellish nightmare predicated on brutish behavior. Rosso allows some measurement of celebration and amusement. The leisurely moments depict Blue and his buddies hanging out as weed-smoking and gig preparation give them a purposeful peace of mind.

Unapologetically radical, intrusive and emotionally gripping, Babylon tears into the mindset of human nature disdain and shows its freshness of doom and despair echoed so convincingly decades ago. The re-release of Rosso's biting British commentary on rigid race relations and concentrated musical liberation through black youth self-examination and self-discovery still resonates to this very day. The vibrancy of the film's dynamic musical score adds a colorful force of contemplation to the table. Forde's Anwar, Yabby U, Michael Prophet, Cassandra, and guitarist whiz Dennis Bovell are among those that contributed to the pulsating movie soundtrack.

The startling Babylon is a needed blast-from-the-past devoted to reggae life and longing as it reminds us collectively how a mere puff on a blunt cannot easily erase the cultural indignities that others bestow on one another systematically.