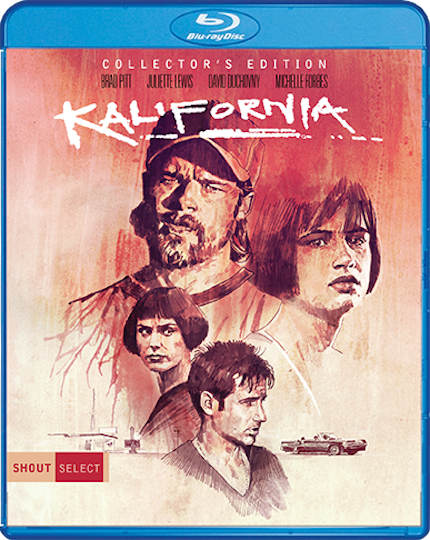 Directed by Dominic Sena (Swordfish, Gone in 60 Seconds) and written by Tim Metcalfe (Bones, Fright Night Part 2, The Haunting in Connecticut) with Stephen Levy, Kalifornia is essentially a snapshot of the early 1990s. The film centers on a cute creative couple that feel something is missing in their lives, and so wish to go to California to liven up their work lives.

Carrie, played by Michelle Forbes (True Blood, Escape From LA, 24) is a photographer who specializes in edgy black-and-white nudes and fetish shots, is the type of strong, take-no-shit woman who embodies the cultural shift that '90s ladies did --- a precursor to the Riot Grrls in black leather boots and red lipstick with an empowered view. Her boyfriend Brian, played by David Duchovny (The X-Files, Twin Peaks, Californication) is a writer obsessed with serial killers.

Together, they decide to go on a cross-country trip to California, stopping at famous murder sites along the way. The idea is that Brian will gather enough material and inspiration to write a book and Carrie will take the photos to illustrate said book. Problem is, they don't have a lot of cash, so Brian posts an ad to share the ride in exchange for gas money.

Well, since this is Kalifornia, the only people that want to go are a screwed-up, redneck couple by the names of Early (Brad Pitt) and Adele (Juliette Lewis). Neither of those actors should need any introduction. And yes, since Kalifornia is spelled with a "K" (for "kill," I imagine), you'd think that this detail would have significance. I'm sad to say that it does not, as director Sena admits in his new interview in the special features. It was as simple as "we just can't call it 'California,' there are already films out there with that title. No? Fine, spell it with a 'K.'"

That's a tangent for sure, but this is the same type of thinking that often undermines the script and at times, how the actual film was shot in terms of angles and filmmaking techniques. To be fair, the acting is often excellent, particularly with Pitt, Lewis, and Forbes. Pitt's tics and choices often skeeved me out. He's so greasy and vile here that you can almost smell him three decades later. He'd wanted to prove he could do more than pretty boy roles, and he blows his typecasting out of the water in this film.

Not to spoil a movie from 1993 too much, but Early has a funny way of fixing his problems with arson, theft, and most of all, murder. Of course, Carrie and Brian have no idea of his hobbies until it's too late. The child-like Adele doesn't seem to have mentally aged past third grade, and really doesn't want to know what her controlling beau is up to most of the time.

As the four of them drive toward California, things go from awkward to weird to bad to OH SHIT. The game is, who will make it to the West Coast alive? This thriller has a lot of things that work well, and a lot of things that don't work well, at least for me. The script is uneven but has decent bones, and the choice of shots can be confusing. For instance, the film sometimes doesn't read as a thriller or offer suspense in places where it should. The acting and action is mostly fantastic, even as the story becomes stilted by Duchovny's sleepy voiceover, narrating and providing endless exposition and indulgence.

The Blu-ray presentation looks quite good in most places, with some minor flickering. Sound is decent for the most part. The vintage featurette is pretty standard stuff, but I was glad to have access to the unrated cut, which is no doubt edgier than the theatrical cut.

To check out a trailer for Kalifornia and to order, head to Shout! Factory's site here.