Sundance 2019 Interview: Wu-Tang Clan and Director Sacha Jenkins on OF MICS AND MEN 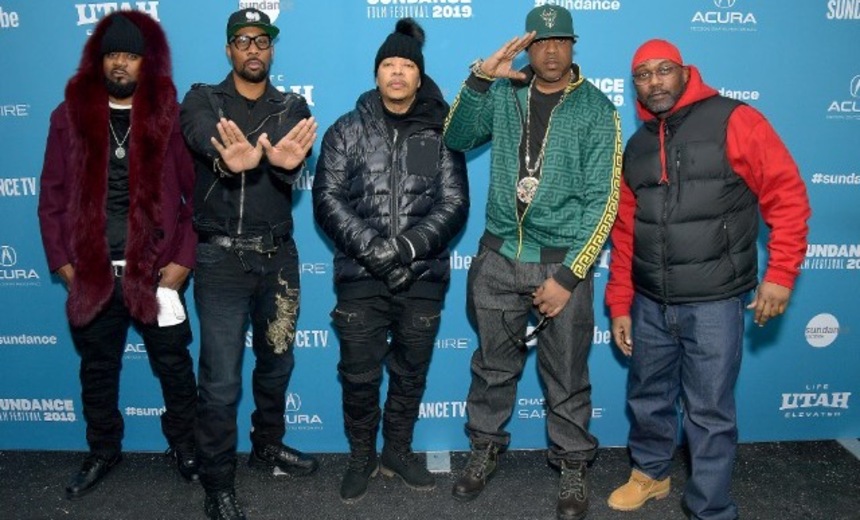 Jenkins titled the film Of Mics and Men as a nod to John Steinbeck, whose works are indisputably renowned as American Classics. Well, we’re almost 20 years into the new century, and with the benefit of retrospect, it’s more than safe to say that the almost 30-year-old Wu-Tang Clan are nothing short of a modern American Classic.

Like the Steinbeckian underdogs who braved dust storms and deep poverty in search of their own slice of the American dream, artists like the ten men who make up the Clan remain fiercely potent voices of the disenfranchised.

Rising from the ranks of the desperate, these are citizens who refused to be defined by their poverty or accept their circumstances and instead gave hope to a nation by translating street hardships into exciting, timely poetry. Is there a bolder Wu-Tang album cover than Ol’ Dirty Bastard’s Return To the 36 Chambers, which proudly boasts his welfare card?

Wu-Tang offered crazy original perspective in a language unique to their street-wise intelligence and personal takes on charisma, channeling their love for the Kung Fu underdog into profound works of hip-hop metaphor and style.

Speaking as someone with a podcast called ‘Music on Screen’, I have seen A LOT of music films/rockumentaries/bios/etc. But I have never seen a talking head conversation quite as rich and cool as Jenkins’ choice to gather the Clan back together at one of their old Staten Island Kung Fu movie houses (the others being on the deuce) to literally watch their own lives flash before their eyes on the same big screen that inspired them to kick ass and take no prisoners so long ago.

The Wu-Tang Clan are essential listening for anyone with even a passing interest in American counter-culture. Countless filmmakers would have killed for the opportunity to tell their story, but in choosing Sacha Jenkins, whose own fascinating biography spans far wider than his forays into documentary filmmaking - which include Fresh Dressed and Nas: Time is Illmatic - Of Mics and Men -- shines a worthy light on a holy subject. Consequently, the series is a strong candidate for the best onscreen music content of the year.

Jenkins and the Clan were kind enough to answer a few of my questions on the eve of the big premiere. Stick around for a treat from RZA.

If I told you 25 years ago you'd be here right now, would you believe me?

RZA: I'd believe you. But I'm very optimistic.

Do you remember the first time you realized that you could do what you can do? When you first figured out that you had this superhuman ability?

RZA: Yeah. Thanks for the compliment. I know that I found myself into hip hop at the early age of 8. I wrote my first lyrics by the age of 9.

RZA: ​It was about a girl with big breasts. But, hey, you gotta start somewhere. You know, then I started writing a rap about sticking to the wall like Spider-Man. You know what I mean? I just kept going.

On top of being a prolific rapper and producer, you’re quite the film buff, not to mention filmmaker. Do you have any current favorite films?

RZA: Wow. I mean, films change, right. But I can say this year I'm kind of tied up between three movies. Green Book, I love. I love Viggo and I love Mahershala. What a great movie. I think Vice was a good one this year for me. But, also one that slayed me: Bohemian Rhapsody … and A Star is Born. It's like, I would watch those three times.

One film I want to pitch for the world, that really had a warm feeling, was If Beale Street Could Talk.

When you worked on KILL BILL you called Tarantino your sensei. What's one of the biggest lessons you learned from that experience and how did you apply it to your awesome filmmaking career?

How are you feeling tonight on the eve of watching your whole life on the big screen?

Cappadonna: Well, I don't know. Like I tell everybody else, good in the hood, but I'm better with cheddar.

Did you enjoy the shoot? How long did the shoot last?

Cappadonna: I mean it took maybe an hour.

Cappadonna: An hour or something like that. I feel like it was good because they caught me at a point when I was willing to give up some information, you know what I'm saying?

Cappadonna: Well, my only regret is that I couldn't do more.

Cappadonna: It's nice to be important, but it's even more important to be nice.

A nearby reporter chimes in: “What about the BLACK children?”

Cappadonna: I mean the same thing applies for all children. When you're dealing with children, you can't really see the color because they're just innocent children. They don't really know the ledge, so you got to teach them so they don't fall off the edge. So we just teach them.

I live and I experience things, and then I report to the children and let them know. Me and my son are arguing right now over if I should give him my car.

What do you think?

Cappadonna: For the sake of argument, he got a point, man. 'Cause I’m living for him now. But it just feels like he's bullying me.

Cappadonna: Oh man, he’s easy going, you know what I'm saying? Easy to get along with.

How’d he get you to spill the goods?

Cappadonna: They just rubbed me the right way, you know what I’m saying? They catered to my ego and allowed me to go ahead and open up a little bit, and give them a little bit about my culture and history.

​Cappadonna: Appreciate you man, thank you very much.

How are you enjoying your Sundance adventure?

Masta Killa: The hilly mountains, the snow -- it's real snowy. I feel loggy right now, it feels oaky and woody. I don't know. Everything's oak and woody, right? I'm from New York City, I'm from steel and iron. Come over here, it's woody and open, you go to Florida, it's pink and green. It's different, different colors and different things affects your mind. This right now feels snowy, I feel like I wanna go skiing, I wanna hit my man in the face with a snowball or something. You know?

If I told you 30 years ago you’d be here, would you believe me?

How does it feel to be encapsulated like this? To see your life play out over four hours?

Ghostface Killah: Right. Well, I've never seen it. I've gotta see it, you know what I mean? ​But it's like I say, it's a good feeling. It's like we already put the soundtrack out. You know what I mean? Of our lives. Now you get to see it on screen. To see the goods and the bads and what we really went through to be here 25 years later.

Is there a part of the film that you're just especially stoked to see on the big screen?

How was it working with director Sacha Jenkins?

Put God first always in your life. Whatever God you represent, you put that first, 'cause right now, I think the children has lost their identity of knowing who the creator is. And that's why a lot of bad things happen. I think the planet is fucked up, you know what I mean? Because if you believe in something that's so pure, why you doin' fucked up shit? You wouldn't be doin' it! Because you're scared to do it.

Ghostface Killah: Yeah! You know what I'm sayin? I don't care about fucking Alexander the Great.

Right, what does it have to do with you?

What say you, U-God?

U-God: Stay off drugs man. That shit is whack.

Do you remember the first time you heard Wu-Tang?

Sacha Jenkins: I was publishing a hip-hop newspaper at the time called Beat Down, and a friend of mine did radio promotion for Wu-Tang, so he handed me the cassette of Protect Ya Neck, and I put it in a car stereo and played the cassette and I was like, "Wow, this is really amazing." So, I remember that moment, for sure.

How would you have described that music you were listening to?

​​Sacha Jenkins: Well, Protect Ya Neck reminded me a lot of the song by LL Cool J called Rock the Bells. It has a lot of guitars in it. I'm a huge guitar fan, myself, so there was something about the song that really had a nostalgic feel, a kind of throwback in pop, but also was brand new at the same time, and I think that's what made it special.

Even though you go far back with Wu-Tang, surely you've learned a lot about them through this project. Did anything surprise you?

Sacha Jenkins: Well, it's not really about me. I think people are gonna see a side of these guys that they haven't. They were very open and honest and very vulnerable about their own lives and their experiences, and I wanted to make a film where -- you know, it feels like so many people love Wu-Tang, but as someone who's native to New York, and being an African-American male coming from the inner city, I often wonder if people really understand what they're talking about, and I wanted to make a film that would help people understand where they were coming from and what they were talking about.

There's something about Wu-Tang. What Wu-Tang represents globally is not just a group, it represents hip hop. So many people, their first exposure to hip hop itself is Wu-Tang. So they don't separate the music from the culture. So what they represent embodies the fullness of the culture, whatever that means. Everyone throws around nowadays, ‘I'm doing it for the culture, it's for the culture.’ But, like, Wu-Tang is the embodiment of culture.

Growing up in New York City we would watch the Kung Fu flicks on Saturday mornings. The stuff that they sampled, some of it is blues stuff that our parents might have had in their record collections. It wasn't polished, at that time. You have so many producers that we love today who are RZA's contemporaries. They were all like ‘What the fuck is this guy doing?’ It's so not polished. And I think that ethos, that sort of punk rock kinda ethos is also something that ingratiated them to so many people beyond the community.

So on one level, I wonder why people are into Wu-Tang because they don't fully understand what they're saying, but it's their ethos and what they represent and how they executed their music is something that is universal in a lot of ways. And that's why I think people love it.

Late-late later that night, RZA threw down a killer DJ set. And it was sweet.

Do you feel this content is inappropriate or infringes upon your rights? Click here to report it, or see our DMCA policy.
CappadonnaGhostface KillahMasta KillaRZASacha JenkinsSundance 2019U-GodWu-Tang Clan