REVIEW: What Men Want certainly is not a rote and recycled fantasy rom-com awkwardly grating on the nerves 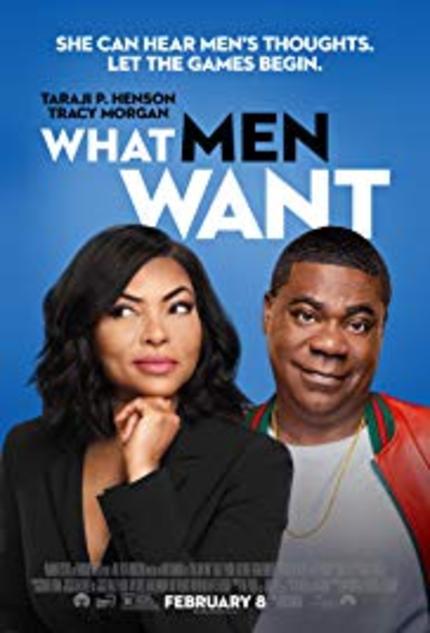 For those anxiously hankering for a gender-swap follow-up to Nancy Meyers's 2000 hit fantasy comedy What Women Want you are in luck as director Adam Shankman ("Enchantment 2", the "Hairspray" films) flips the script and gives us the feminine version with the sketchy and uneven second installment What Men Want. As for the rest of us Shankman's rote and recycled rom-com will remind us why neither of the sexes are worthy of making anyone care what these dismissive protagonists want in the long run. Impishly wooden and convoluted, What Men Want is a lazy tiptoe through tripe perceptions of what an alpha female perceives as relating to her meathead male colleagues.

Shankman and screenwriters Tina Gordon Chism and Jas Waters concoct a tiresome and trivial premise that exhausts the age old gimmick of wondering what the opposite is thinking--at least in the case of tomboyish Ali Davis (Oscar nominee Taraji P. Henson). Naturally, Ali has tough skin seeing as though her life-long existence has been around male-dominated circles. For starters, Ali is the daughter of a boxing coach. Secondly, she works professionally as an Atlanta-based sports agent. However, Ali certainly is no pushover in the demanding pro world of athletics. In fact, Ali is as self-absorbed and set in her ways as her high-priced clients. Nevertheless, she is top-notch in the competitive office full of opinionated, macho mouthpieces. Ali does enjoy a certain degree of clout at her workplace as she has her dependable assistant Brandon (Josh Brener) at her side. Still, she is contending with a devout boys club in the office...something that she is not necessarily privy to at this point.

Sadly, disappointment hits Ali when she is overlooked as a major partner at her sporting agency. As the only female represented at the agency Ali is turned down for a candidate not as seasoned as her credentials. Feeling rather crestfallen Ali will experience a consultation with a psychic named Sister (singer Erykah Badu) while drinking her mysterious potion and some freakish accident at a night club that will suddenly cause her "special powers" to emerge--the ability to read men's thoughts.  The question remains: is it an advantage or disadvantage for Ali's newly acquired mind-reading skills to flourish within the shark tank of dripping masculinity?

There never seems to be a clear agenda for what Shankman's What Men Want is looking to achieve in terms of its farcical theme. Sure, the intention for the film's womanly force to invade the various psyches of men and their hidden thought processes can present a foundation for adventurous nuttiness. Still, the film never really engages the audience in anything radically outrageous or revelatory. Henson's Ali is definitely sexy, bouncy, brash, and competent as the curvaceous go-getter in a testosterone-tainted prism. The script restricts Henson in staid material that could have explored its colorful verve more resourcefully. Granted that Meyers's What Women Want had Mel Gibson's giddy chauvanistic take when dealing with the puzzling females that consumed him. Shankman's offering of Henson's Ali merely shuffles her into pat predicaments concerning the distinctive men in her life.

The so-called "men" on display include Ali's bartender boytoy Will (Aldis Hodge) whose relationship will grow deeper and more meaningful despite being used as a useful ruse initially. Comedian Tracy Morgan is on board as the wacky father Joe "Dolla" Barry of the No. 1 draft pick that Ali's sporting agency is seriously courting. Legendary blaxploitation Shaft icon Richard Roundtree stars as Skip Davis--Ali's Daddy Dearest harboring some lingering sadness due to a personal loss. The film also arbitrarily tosses in a who's who of sporting notables such as pro basketball's Shaquille O'Neil, Grant Hill, Lisa Leslie, and Dallas Maverick owner Mark Cuban. Former pro footballer Brian Bosworth figures into the mix as well. Even the aforementioned Brandon is not immune from Ali's special calling for obtaining thoughts into the noggin.

No doubt that Henson's Ali and her galpals (played by Wendi McLendon-Covey, Pheobe Robinson, and Tamala Jones) add a spirited contrast to male egos at bay. It is just too bad that What Men Want comes across as a sketchy sideshow that fails to fuel any comical chaos between the embattled genders. This romantic romp wastes its entertaining potential in the shadows of a gender-swapping genre already feeling achingly gimmicky.

Do you feel this content is inappropriate or infringes upon your rights? Click here to report it, or see our DMCA policy.
Nancy Meyersromantic comedysportsTaraji P. HensonTracy MorganWhat Men Want