After the suicide of her husband, a famous European actor named Stefan Delvoe (Michiel Huisman), American photographer Katherine (Katherine Waterston) decides to pretty much disappear, to the point that her mother (Mary Kay Place) is the one who has to return to Brussels to deal with some pending issues linked to the tragedy and with Stefan’s own mom (Julie Khaner).

However, her mother’s health problems will eventually bring Katherine back to the city where she lived with her partner, thus State Like Sleep becomes a film about such subjects as coping with the death of a loved one and trying to finally move on from it -- Michael Shannon enters as a new man in the protagonist’s life -- while also functioning as a neo noir, as Katherine takes the detective role, looking back at what happened prior to the death of Stefan, and getting a vibe that maybe it wasn’t a suicide.

Now that the movie is in theaters and available on Digital and On Demand, here’s my interview with writer/director Meredith Danluck.

ScreenAnarchy: You also wrote the movie, which has so many elements, but at the beginning, what were the themes and ideas that you wanted to explore?

Meredith Danluck: State Like Sleep was my first feature film script. I really had to kind of learn what I was doing. Through the process of writing, re writing and re writing, the script really took its own form.

The tone of the film is really utilizing the kind of architecture of the mystery or noir genre; it was emerging on its own, this kind of mood of that genre and I realized that the subject matter that I was exploring, which is the death of Katherine’s husband, it really was this mystery and her trying to piece together why someone would do that.

Once I clued in to what I was trying to do, which was to really make sense of something so complex and psychological such as grief, as a mystery and utilizing that genre, then it really started to take form and come together structurally. 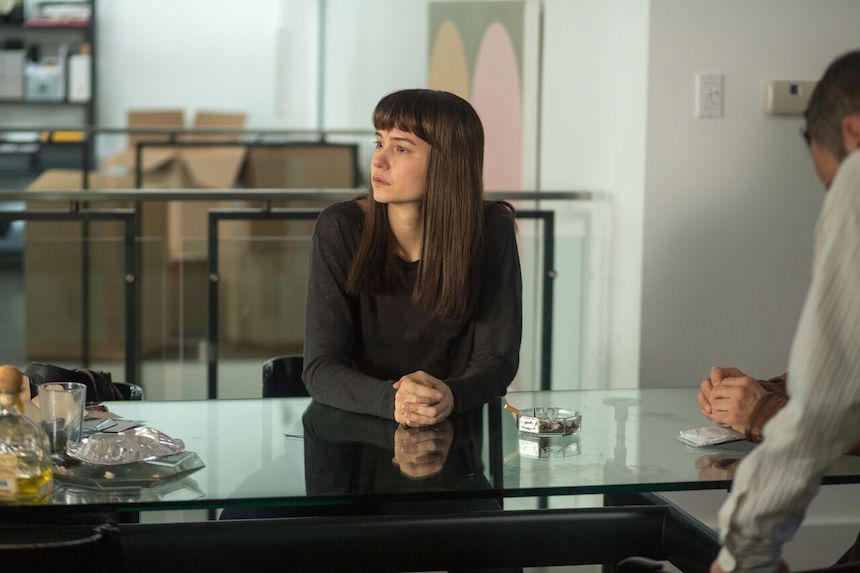 The film plays with the neo noir genre, like you said, so what was the challenge to deal with this classic genre and, also, what did you want to bring to it?

Those are really good questions. If you kind of lean in too much to any genre, it becomes a trope, style over substance, so those are the challenges: you have to be careful about how and when and why you’re utilizing certain genre elements.

Adding to the genre, for me there were aspects of the genre that seemed to really suit the psychological subject matter, like misdirection, the idea of a red herring, and double crossing, these are all kind of the worst elements of human behavior, so utilizing those and bringing to those elements a kind of deeper, more emotional aspect to the genre.

It’s not all about stark lighting, it’s not just the style, it’s how that emotion can be in a familiar package. I really love a good story, I love putting together the puzzle pieces of a movie, so for me having that aspect of the film being entertaining and feeling like we’re actually involved putting together this puzzle, was really important.

It’s interesting that, ultimately, the film is really about a woman finally facing a tragedy that she ran away from. Can you comment on this theme of coping with the loss of someone you know?

That’s really what the film is about. It’s about grief, the grieving process and the way that we negotiate with ourselves in order to make sense of everything, because I think it’s really hard to grasp the concept of this person is gone forever, where do they go? What’s forever? We invent different stories, whether you believe in heaven or you believe in reincarnation or whatever it is, we tell ourselves stories so we can make sense of this abyss and this mystery of that.

In my personal experience, that’s something that I had done, made up stories and asked questions and created a narrative that enabled me to understand death in a way that was more tolerable, so I made Katherine’s character do the same thing. And yeah, in the end, it’s really about how to come to terms to get that final level of acceptance and moving on and being able to accept love into your life again and kind of wake up. 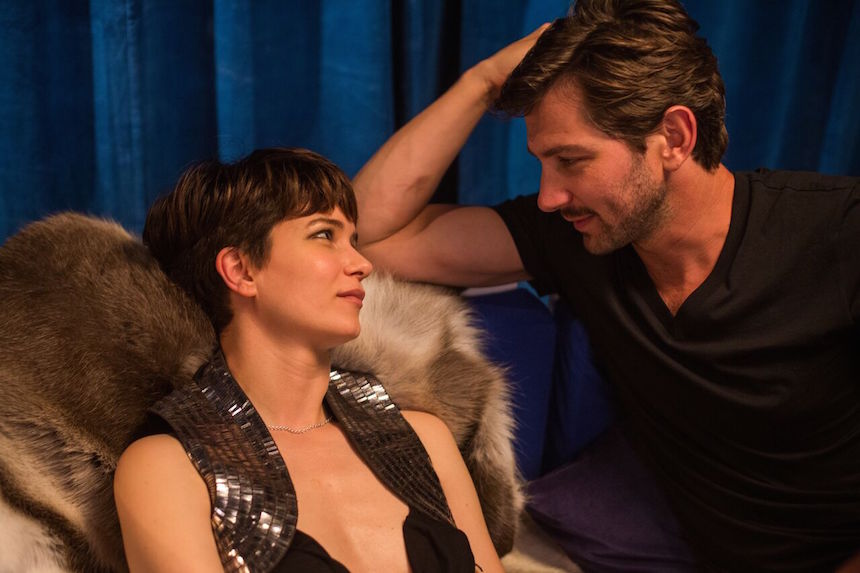 Aside of Katherine’s character, we have Michiel’s character, the husband, who brings this layer of someone living a double life. Where did he come from?

I had someone in my past that did live a double life. It was pretty shocking to realize that that was possible, that you could know someone so intimately and yet not know them at all, that someone was able to keep secrets in that way, was really terrifying, because what it ultimately meant was that people that keep secrets are terrified of themselves. They see themselves in one way and they behave in another, it’s scary for them. There’s a lot of self-torture that goes on when someone has that kind of duplicitous identity. 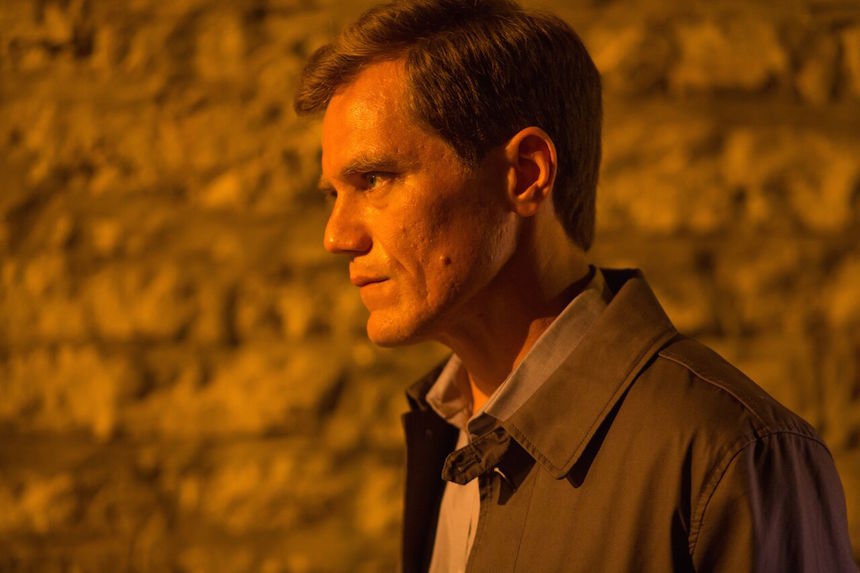 There’s also Michael Shannon in, I would say, one of his most humane roles. How was working with him, especially in that very important scene when Katherine’s character and him recognize each other as these troubled souls?

Yes, working with Michael Shannon and all the cast was incredible. I was incredibly lucky to have such a powerful, talented cast.

This was a role that was definitely against type for Michael Shannon, he’s usually cast as a kind of scary villain, and here he’s essentially a romantic lead, very charming, handsome, charismatic but still very flawed.

He was able to bring a lot to that character, a lot of humanity, sensitivity and humor; I think a lot of the humor in the film comes from his character. He was really the perfect person for this role.

And then your leading lady, Katherine Waterston, she was not long ago in another neo noir, INHERENT VICE. So how was the process to cast her, as the movie really relies entirely on her shoulders?

Absolutely. I had Katherine in mind almost from the very beginning, she read one of the very, very early drafts. At that point I started following her career, she had just been cast in Paul Thomas Anderson’s Inherent Vice when I met her. From that point I started working on my revisions and I had her in the back of my head the whole time.

She’s the real deal, incredibly disciplined, very talented, she’s a professional in every sense of the word and also brings to her character a level of depth and intelligence that is so immediately legible on her face. There’s so much going on in this lead character that she had to carry just with her expression.

She had to do a lot of heavy lifting emotionally for this role, and I knew I needed someone that had the chops and the discipline, and also the emotional experience and depth; not everyone can go that deep and be so generous with their performance. She was the one. 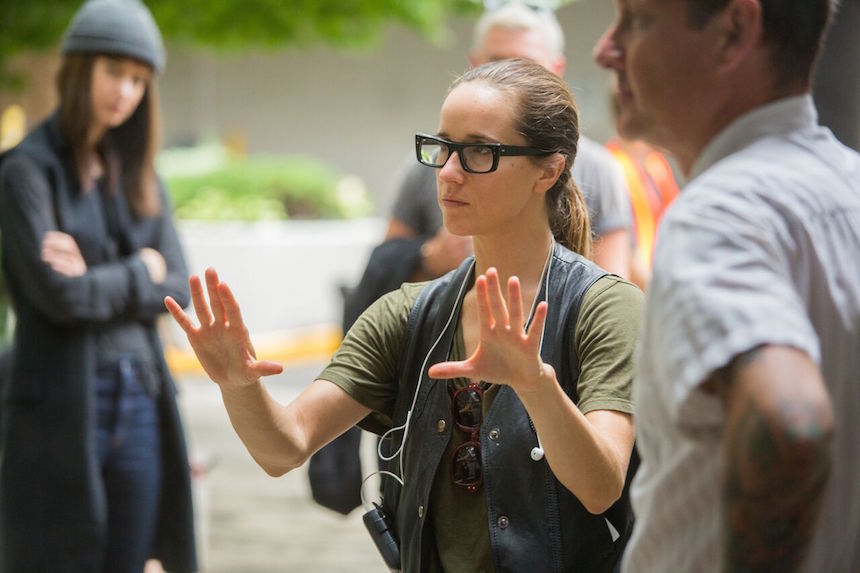 It was a long process to write all these characters, like you said, and many themes of the film, such as loneliness and coping with death. So in the end, what was the most important thing that you took away from making STATE LIKE SLEEP?

Oh man, to be honest, I just want to make more movies [laughs]. Being on set is a magical thing, that level of collaboration and creativity is where I feel more connected and alive. It’s just the level of constant creativity that is quite addictive, I think.

Working on a script is an incredible creative process too, but it’s one that happens, for the most part, alone; I have a new script that I’m ready to put into development, and I’m just hoping it comes together quickly so I can get back in that kind of creative, collaborative environment.