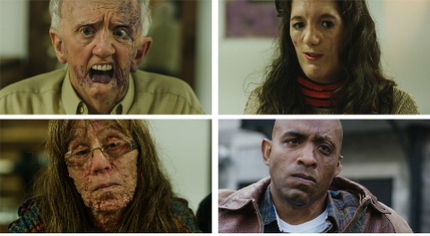 In our exclusive clip from Happy Face, we hear from people who are often shut out of the cultural conversation, not necessarily because of what they say, but because of their outward appearance.

Set in Montreal, the film will enjoy its U.S. premiere at the Slamdance Film Festival later this week. Here's the brief synopsis:

"A teenager deforms his face with bandages and attends a therapy workshop for disfigured patients in a misguided attempt to reconnect with his manipulative disease-ravaged mother."

Watch the exclusive clip below, along with the official trailer. Happy Face will screen at Slamdance on Sunday, January 27, and again on Wednesday, January 30.