REVIEW: Then Came You is a vibrant look at friendship and romance set against poignant quirkiness and quiet despair 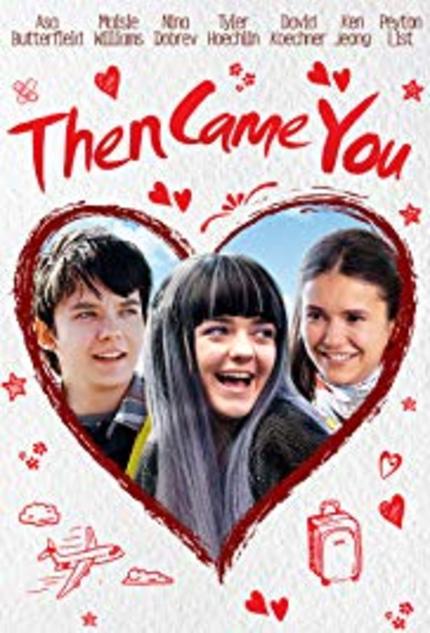 There are countless manipulative, saccharine-coated teen romancers that aimlessly bask in cliched conventions of youth-oriented stagnation and alienation. Thankfully, the new year of 2019 starts off on a decent note by offering a different kind of upbeat teen romance genre that has legitimate heart, wit, and gentle substantive pathos. In director Peter Hutchings's ("The Outcasts") quirky-minded yet solidly conceived dramedy Then Came You the sentiment is blatantly clear about living for the moment and valuing the little things that matter despite the size of the adversity. Then Came You does not necessarily break ground in its perception of youthful love and friendship but it manages to promote a genuine feeling of comfort and consciousness. Hutchings's nifty gem is a profound combination of amusement and sorrow set against a playful background of soul-searching.

Screenwriter Fergal Rock conceives a cheeky story that resonates soundly in its sprinkled charm and contemplation. Motivational and endearing, Then Came You surprisingly boasts some fine performances amid the scattered deadpan humor and obligatory angst-ridden overtones. The movie stars Asa Butterfield ("The House of Tomorrow") as 19-year old airport baggage handler Calvin Lewis dealing with an array of hypochondriac issues. When Calvin is not working side-by-side with father Bob (David Koechner) and older brother Frank (Tyler Hoechlin) at the airport he is found attending his slew of doctor's appointments where the physicians continuously inform worrywart Calvin that his false alarms of sickness are not physical. Of course, poor Calvin--the basketcase that he is--thinks otherwise.

Calvin is a young man with hidden scars buried in his torn psyche. Despite a hard-working father and soon-to-be family man brother that is supportive he has a lot to contend with on his fragile mind. For starters, Calvin is carrying some guilt about being a surviving twin in a critical car accident that killed his sister many years ago. Because of this saddened incident, Calvin refuses to celebrate birthdays. Furthermore, Calvin's mother Ellen (Ann Osmond) has suffered a complete nervous breakdown and remains mute because she was driving at the time causing her young daughter to die. Perhaps her deep-seated guilt from yesteryear and being around Calvin is a constant reminder of that tragic day causing her permanent psychological shutdown. Additionally, Calvin's refusal to fly airplanes is a head-scratching irony given that his job is situated at the airport.

When the withdrawn cancer-free Calvin sits slumped over at one of his cancer support meetings (the suspicious mole on his chest anoints him as one of the cancerous casualties) he will be saddled with the presence of an overly impish cute British teen named Skye Aitken (Maisie Williams, "Mary Shelly", "Early Man"). Clearly, the intrusive but spunky Skye is intrigued by the standoffish Calvin who is in no mood to socialize with the extroverted cancer-stricken lass. Calvin shuns the bubbly Skye after the support meeting as he rushes off to work. This does not stop wild-child Skye from tracking down Calvin at the airport and making a fun-loving nuisance of herself in front of him.

Eventually, we are given the backstory behind Skye's clingy nature with a bothered Calvin. Supposedly, she states that Calvin (or someone like him that feels defeated in life) is one of her many to-do assignments on her bucket list before her life expires. Since she is on borrowed time Skye enlists the sullen Calvin to accompany her on a wacky mission to complete her bucket list tasks. Comically, Skye's urgent listing includes shoplifting, barbershop shaving, garbage collecting, dueling, and riding fire engines among other things. A couple of cops in Officers Al and Mya (Ken Jeong and Briana Venskus) seem to show up to bust the sickly teens during a few of their bucket list high jinks. Since Officer Al's elderly father is in the same cancer support group as Calvin and Skye he and his partner Mya refuses to admonish the devilish duo. This is quite funny stuff (a gag that is borrowed from the clueless cops' antics in Superbad).

Soon, Skye will learn about Calvin's affectionate fixation for beautiful flight attendant Izzy (Nina Dobrev, "Dog Days")...a fetching woman that both agree is out of Calvin's league. It turns out that Izzy maintains some curiosity about Calvin as well. Izzy has emphatically stated that hot guys are not really her type per se. Interestingly, it is the sensitive man with faulty attributes that appeal to Izzy...at least that is what she confides to her bewildered colleague Julian (Tituss Burgess). Hmmm...could this be the opening that would help out her scrawny admirer Calvin? In the meantime, Skye's setback for love is destroyed when stuck up popular girl Ashley (Peyton List) steals away a hunkish guy at a party that has been on her romantic radar for a while.

For once things are going well for the complicated Calvin Lewis. He has bonded a solid friendship with the erratic Izzy as they continue to grow closer around her extensive bucket list. Also, Calvin finally secures the romantic attention of Izzy after a shaky first date at the movies engineered by a pushy Skye. As Calvin and Izzy explore more into their developing relationship and finally share that golden kiss, Skye has a sexual encounter with the boy-toy that kissed Ashley at the party--a breakthrough moment as it completes another notch on her bucket list. Calvin and Skye are riding high in the saddle as their connection is cemented in private confidences. Both their families embrace them individually. Even Officers Al and Mya find spare time to hangout out and humor the young folks. All is fine and dandy until the unimaginable happens as Skye's medical condition worsens and Izzy's honeymoon haze for Calvin is suddenly threatened. Can Calvin handle the pressure without revisiting his breaking point?

Indeed, Then Came You is thoroughly affecting. Hutchings oversees a thought-provoking showcase of a teen romance that has depth and dignity in its movie-making DNA. Rarely does a film of this magnitude involving young discovered love and manufactured friendship express such sincere despair and levity simultaneously. Hutchings's encouraging narrative is emotionally draining. The terrific turns by leads Butterfield and Williams are resourcefully poignant without being cloying. As Calvin and Skye, the committed performers are spot on as the plagued pair surviving their embedded heartaches yet forging a co-dependency that is feisty and enriching. The supporting players are effectively poised and productive--particularly veteran funnyman Koechner in a durable role as the consoling blue-collar father Bob holding his fragmented family together. Jeong, Venskus, and Burgess are on board as the occasional sideline comic relief. Refreshingly, Dobrev's Izzy is the gorgeous gal without the proclivity for shallowness.

Then Came You is the first official Valentine of 2019 and it throbs convincingly for those that believe in the chemistry of the unfulfilled heart.

Do you feel this content is inappropriate or infringes upon your rights? Click here to report it, or see our DMCA policy.
Asa Butterfieldbucket listfriendshipMaisie Williamssupport groupterminal diseaseThen Came You