REVIEW: The Upside has a downside...its woefully pat look at an unconventional salt-and-pepper friendship in manipulative mode 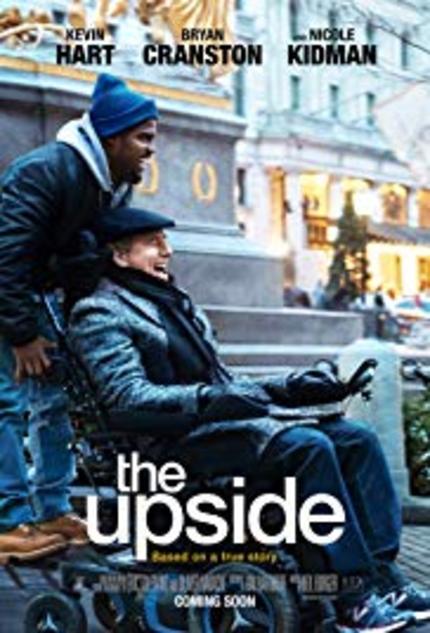 On paper The Upside is well-meaning in its attempt to portray an unlikely bond between two disenfranchised guys from different walks of life. In the aftermath of such a moving drama such as the critically praised Green Book where male-oriented race relations in business-turned-partnership left a sentiment of mutual understanding and respect, The Upside offers a slightly similar take on the same kind of formula without the sophisticated gravitas. Nevertheless, The Upside has a downside...its woefully pat look at an unconventional salt-and-pepper friendship in manipulative mode. Predictably cliched, mechanical, and transparently amiable, The Upside basically force feeds its high-minded hokum with the familiar hammy strokes of feel-good chuckles.

The casting of the always-steady and solid Bryan Cranston and omnipresent go-to funnyman Kevin Hart should be enough to pull the cohesiveness of this dramedy together in its poignancy and punchlines. Cranston, an adventurous actor willing to experiment so effectively in drama and comedy, is always reliable and ready to mix things up as only a gifted performer of his caliber can do.  Plus, Hollywood continuously calls on Hart to deliver his flimsy conveyor belt comedies on the big screen for the legions of his avid fans. And even Nicole Kidman, who has been very busy at the box office as of late, finds a chance to partake in this pseudo warm-hearted buddy-buddy giggler. Still, this celebrated trio of performers cannot uplift The Upside from its flaccid foundation of off-kilter breeziness.

The Upside is based on the mediocre 2011 French film Le Intouchables that created a decent buzz back in the day. Director Neil Burger ("Divergent", "Limitless") and screenwriter Jon Hartmere concoct a toothless dramedy that plays out its tiresome take on male opposites clashing then meshing as the existing circumstances draw them gradually together. It had been rumored that this movie's concept had been kicking around Hollywood for years with notable names attached for consideration. Nevertheless, Cranston and Hart signed on the dotted line to partake in a cheesy and chunky rainbow bromance that has all the touching appeal of a squeaky fence on a windy day. This predictable Odd Couple knockoff rests on the shotty shoulders of recycled slapstick, eye-rolling stereotyping, strained class warfare platitudes, and thinly-veiled weepy convictions. The Upside is probably deemed a come-up for the exhaustive Hart relentlessly caged in manuafactured urban laughers such as the dreadful Night School. But for Cranston to grab a paycheck for this chuckling misstep...well, this is something quite inexcusable.

Burger's true-to-life tale premise involves a white quadriplegic billionaire Phillip (Cranston) being catered by his black ex-con caregiver Dell (Hart). At first, Phillip--used to being independent and living large before his paragliding fiasco--resisted the idea of any assistance but his trusty secretary Yvonne (Kidman) convinced him to go this particular route. Apparently, the bespectacled Yvonne has a romantic eye for the stillborn Phillip. Thus, Dell is inexplicably selected to service Phillip's needs despite clearly being unprepared for the caretaking position. Phillip is strangely drawn to Dell despite his unqualified status but there may be a method to the wealthy wheelchair-bound rich man's madness. Perhaps as an unconventional care provider Dell will not be as serious and allow some flexibility for Phillip to call the unconditional shots? Whatever the reason Dell has no choice but to accept this job to keep his parole officer at bay.

And so the forged friendship materializes into scattershot strokes of makeshift manipulation. See Phillip introduce the uncouth black nurse the finer things in life such as art, opera, and a sense of structure and obedience. See Dell allowing the severely disabled white Mr. Moneybags "loosen up" and chill out to the tunes of Aretha Franklin, junk food, and smoking marijuana to relax. The tandem vicariously live through one another and benefit from their unfamiliar experiences. Phillip becomes an honorary pothead feeding off of soul music and soul food. Dell becomes somewhat cultured and refined and puts others before himself. Wow...is this not special or what?

Amazingly, The Upside has no shame whatsoever in its insulting messaging of cheap-minded gags, sloggish commentary about contrasting racial identities, and its pandering to melancholy, twitchy overtones. Burger's whole nonsensical comedic confection is as contagiously witty as a diaper rash. There should be props attributed to Cranston's disciplined acting as the physically-challenged protagonist whose facial movements are key in conveying his limited communication. Hart, on the other hand, resumes his typical black street-wise caricature roles to the point of obvious cringe-worthy levels. The mere suggestion that Phillip's drastic disability is as restrictive and sorrowful as Dell's cartoonish bad boy "blackness" is an undeniable embarrassment to say the least for both . Furthermore, the movie has nothing to hang its hat on besides the cheeky sexual smirks and every borrowed black-and-white funny entanglement bit known to movie-making mankind. How or why Kidman took part in this throwaway racial romp is an existing mystery--certainly one could say the same for Cranston's questionable participation.

Thoroughly tedious and tripe, The Upside does to needy men in pursuit of meaning and purpose in this mawkish movie what a blister does to a sore lip--you yearn to pop it and hopes it will go away in due time.

Do you feel this content is inappropriate or infringes upon your rights? Click here to report it, or see our DMCA policy.
Bryan Cranstonex-confriendshipKevin HartNicole Kidmanrace relationsThe Upsidewheelchair-bound