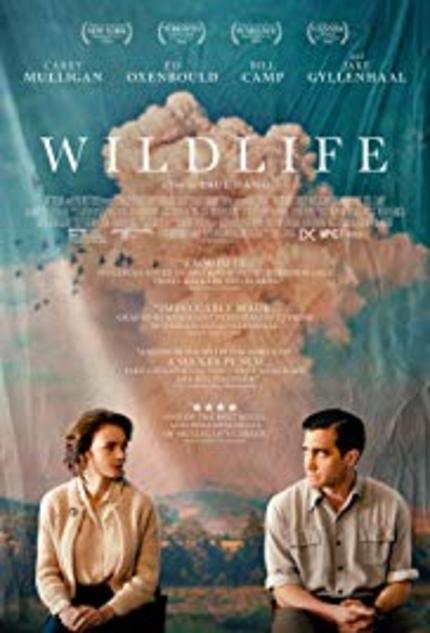 Co-writer/director Paul Dano's solemn and soul-searching period piece family drama Wildlife delves into its personalized truth about the fragility of a tortured family struggling with a fragmented dissolution. Specifically, the heft of the sedate tension is realized through the dramatic output of Carey Mulligan's penetrating performance as a disillusioned wife/mother detached of emotional completeness. Mulligan's slow burn alienation is a compelling character study of a wounded woman too numb and distant to fulfill her domesticated role blocked by psychological emptiness. Wildlife is an affecting, low-key gem of an absorbing story that packs an unassuming punch regarding a portrait of a dysfunctional family unit lost in heartbreak and indecision.

Dano, primarily known as an actor in mainstream and indie films such as the Oscar-winning 12 Years a Slave and yesteryear's Little Miss Sunshine, shines in his directorial debut in an introspective domestic drama that basks in its own truth. Dano and co-writer Zoe Kazan's script is based on Richard Ford's 1990 novel of the same name. Fittingly, Wildlife takes place in 1960--a year of transition for the Brinson family as they try to pick up some momentum in their stillborn lives as they settle in rural Montana. In the aftermath of the Eisenhower years in the '50s, the country is also making a transitional adjustment entering the era of Kennedy's Camelot administration with the emergence of the soon-to-be turbulent '60s.

Jeanette Brinson (Mulligan) is stuck in her marital malaise with husband Jerry (Jake Gyllenhaal, "Stronger"). Jerry had just lost his golf club job and now hastily decides to take on a dangerous job while fighting wildfires in the mountains for $1.00 an hour. Of course. this leaves the destitute Jeanette alone and helpless as she looks after the couple's 14-year-old son Joe (Ed Oxenbould). Soon, Jeanette starts confiding to young Joe about his father's inadequacies as she emphasizes how overwhelming it is for her to handle Jerry's departure. Poor Joe has to hear about his parents' fragile marriage. Clearly, it is awkward for the uncomfortable youngster to witness the emotional collapse of his mother while his absent father is putting out flames elsewhere instead of lighting a supportive fire back at home with his abandoned family.

Imagine one's mother saying to their impressionable son, "Your father and I, we haven't been intimate lately". Better yet, can you picture your mother taking you on her date as she tries to cozy up to an older guy for comfort and affection behind your missing father's back? Sure, Joe Brinson is a precocious lad...at least in comparison when dealing with his detached mother and immature father. This hapless boy is forced to observe the piece-by-piece mental breakdown of severely flawed parents trapped in a devastating lull of senselessness. Both Jeanette and Jerry are lost and listless in their tattered souls. Joe's parents are victimized by their critical circumstances that range from financial woes to shattered familial incompleteness. The real victim, however, is the youthful Joe whose exposure to such quieted disdain and indifference is the personalized burning tragedy that needs containing--not the wildfire being handled by his shell of a father Jerry in the far away mountains.

Interestingly, 2018 has been a notable year for ex-child actors-turned-directors helming the cautionary family dramas featuring authentic angst-ridden profiles of youngsters in nostalgic, uncertain times. First, Jonah Hill's Mid90s effectively took audiences into a realm of strife within its rebellious young protagonist's chaotic existence. Now Dano has explored this territory with a more tranquil but equally shocking showcase of uncompromised family-related frustration in Wildlife. There is no doubt that Dano's pragmatic period piece of domesticated disarray will be misplaced among the more flashier film fodder being offered at the tail end of the major awards-seeking year. Nevertheless, Wildlife is an absolute find in terms of its instrumental, thought-provoking family-induced crisis and consciousness.

Consequently, Wildlife boasts mighty fine, perceptive performances from its committed cast that give unsettling verve to the motivational material. Oxenbould's Joe is the spirited glue that holds the gentle brimming turmoil together as it his sad story that is told from his unique perspective. Mulligan's surfacing rage as the deeply dissatisfied and depressed Jeanette just illustrates what a raw and observational actress she is when undertaking a reflective, broken feminine role. Gyllenhaal, who is always inspired in whatever particular role he tackles, is steadily convincing as the so-called breadwinner in defeat. Mulligan and Gyllenhaal, former Oscar nominees, definitely deserve to be tapped for such honors again in this refined sleeper. The collaborative efforts involving Dano's artistic vision concerning this fictional family's underlying self-destruction is soundly measured set against a backdrop of apple pie-innocuous America just before the decadence of the tumultuous decade of the 1960s erupts.

Alas, Wildlife is effortlessly moving in its ode to the low-key hysterics of the fickled family foundation floundering within the so-called innocence of mid-western stagnation and mistrust.

Do you feel this content is inappropriate or infringes upon your rights? Click here to report it, or see our DMCA policy.
1960sCarey MulligandysfunctionfamilyJake GyllenhaalmarriageMontanaPaul Danoteen boyWildlife