Review: SPIDER-MAN: INTO THE SPIDER-VERSE, Once More With Feeling!

Shameik Moore leads the cast of this latest exploration of the Spider-Man mythos. 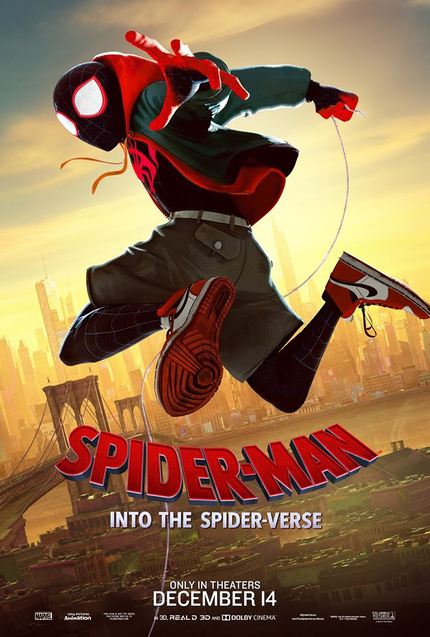 As a moviegoer who has grown weary of the unending barrage of superhero offerings clogging multiplexes these days, I was not particularly looking forward to Spider-Man: Into the Spider-Verse.

Not only is it another addition to the dozens of comic book movies that all start to look the same after a while, it's also the fourth separate attempt to bring a version of Spidey to the big screen in less than 20 years. None of these are reasons to get excited in my book, however, having now seen this new iteration of what should be a well-trodden path, I am convinced that there is still life left in this character who is easily the most relatable big screen hero of the bunch.

In a world where Peter Parker has been Spidey-ing it up all over New York for the last decade, Miles Morales (Shameik Moore) is a pre-teen, fish-out-of-water in his Brooklyn private school. He's just been moved out of his public school after being selected via lottery to attend the prestigious Brooklyn Visions Academy boarding school where he's privy to top of the line education and opportunities that he might not get at home. That's cool and all, but Miles really just wants to be an artist, and while his cop Dad might not be a fan of his medium - tagging stickers all over town - his uncle Aaron is into it, putting him at odds with the family.

When Miles gets bitten by a radioactive spider on a tagging trip deep within the NY subway lines, he gains some of the powers we are all familiar with and ends up stumbling into a massive experimental laboratory in which Peter Parker is battling Green Goblin to stop a giant machine from opening a portal between dimensions at the behest of Kingpin. It's quite a sight for the young man to behold, even more frightening that the ensuing melee fails to stop the machine and the resulting inter-dimensional rift causes some weird after-effects.

All of the sudden a handful of alternate Spider-heroes appear in Miles' New York, none of them really knowing much about what's going on, but all of them wanting to get back home. Among the interlopers is an alternate older version of Peter Parker (Jake Johnson) who acts as a mentor to the younger Spidey in the hopes that they can work together to get everything back to normal, but it's going to take a lot of work.

Parker and Morales are joined in this crusade by the black and white Spider-Noir (Nicolas Cage), Spider-Woman (Hailee Steinfeld), Spider-Ham (John Mulaney), and Peni Parker (Kimiko Glenn). Each of the Spider-Alts gets their own animation style, the own mannerisms, and their own chances to shine, quite an impressive effort in a film already fairly crowded with new characters. The multiple characters all want to get back home, and it's going to take each of their specific abilities to do so, but none of it works if Miles can't hold it all together on his own home turf.

I should be tired of Spider-Man origin stories, but maybe it's the fact that this isn't Peter Parker's story that allows me to give a little benefit of the doubt to Into the Spider-Verse and really warmed me up to the execution. Miles Morales is among the first non-white major superheroes to get his own feature, and the writers did a great job of differentiating his story from the standard tales we've already heard a hundred times. Even though we just saw the tremendous success of Black Panther earlier in the year, it's nice to see a humbler, more relatable version of the origin story.

A young kid with a black father and a Puerto Rican mother, Miles' journey is different from Peter's in significant ways. He has to not only navigate puberty, which he does audibly on a few occasions, he also has to navigate the plurality of his heritage, and the film makes no excuses for this, which is beautiful. On more than one occasion Miles' mother Rio (Luna Lauren Velez) speaks to him in Spanish, unsubtitled, as though it's not a big deal. This is a huge deal. For many film fans, seeing this may be their first time seeing their own experience reflected on screen, especially younger Spider-Fans. I'm not going to lie, as a biracial film fan myself, it made me smile.

While Miles' ethnicity is a prominent part of his story as a character, it isn't put in place to make the film a message movie about inclusion, it just is. It's this kind of acknowledgement that people like Miles exist and are a normal part of the world that helps grow empathy among audiences who are so used to more simplistic treatments of the issues.

While I loved these elements of the films, there are a couple of things that rang a bit stale. The screenplay was co-written by Phillip Lord of Lord & Miller (The Lego Movie), and Miles' story follows a lot of the same beats with an unexceptional young man learning he is extraordinary in a way that can change the world and coming to grips with his powers with the help of a team of helpers with more experience than him. It's all pretty familiar, however, there is plenty to enjoy, and this familiarity isn't really a hindrance to an audience willing to take the film at face value.

It would be ridiculous of me to talk about Into the Spider-Verse without addressing the incredible animation style. A first of its kind effort to recreate the Ben-Day dots style of multi-color printing used in comics for years is really remarkable and the kind of thing we haven't seen before.

The film looks like a comic book in motion, with the overlapping dots often used to throw items in the foreground and background out of focus or to draw the eye to specific portions of the screen. For the first reel of the film, the effect is pretty obvious, but as it wears on, it settles into the background, especially as the new alternate universe characters all have their own animation style within Mile's universe. It all makes for an incredibly dynamic experience and unusual characterizations for familiar characters that definitely helps to keep the film feeling fresh.

Spider-Man: Into the Spider-Verse is an unusual and unusually charming coming of age story in the guise of a superhero film. I didn't think I wanted or needed this film, to be honest, but what the filmmakers managed to make of the final product proved me wrong. This is perhaps the most emotionally sophisticated and empathetic treatment of one of comics' most human of characters, and for that alone it is worth giving a try, even if you've grown as fatigued by this particular brand of spectacle as I have. Miles Morales might be the best big screen Spider-Man yet, he's certainly the freshest, and after having had eight chances to get it really right, that's saying something.

Do you feel this content is inappropriate or infringes upon your rights? Click here to report it, or see our DMCA policy.
Christopher MillerPhil LordShameik MooreSpider-Man

More about Spider-Man: Into the Spider-Verse