Blu-ray Review: THE PLAGUE OF THE ZOMBIES Is Overlooked Hammer Fun 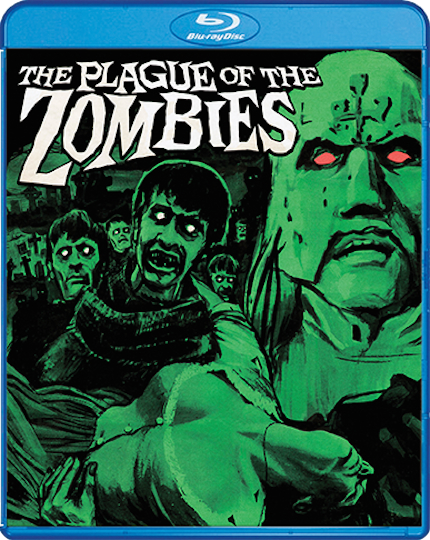 One of Hammer Films more overlooked horror films within its canon, The Plague of the Zombies is a 1966 tale of class struggle and colonialism run amok in Great Britain (Cornwall, specifically). The great British character actor Andre Morell (who should have starred in as many films for Hammer as Peter Cushing did) stars as Professor Sir James Forbes, a teacher, doctor, and all-around sensible man in a land of superstitious villagers. He's summoned by one of his star pupils, who's perplexed by the deaths of several young people in Cornwall.

Forbes and his daughter Sylvia (Diane Clare) got to visit, and Sylvia's old friend, the lovely Alice also succumbs to whatever local madness is happening. As it turns out, Squire Clive Hamilton (John Carson), who plays a great villain, has been to Haiti and has returned to his family's old mansion and mine -- along with drum-beating slaves and the power to resurrect the dead to do his bidding. I don't mean to spoil a very old film, but everything is telegraphed, and the villain is revealed very early on. With films like these, it's always far more about the journey than the destination.

The dueling forces of Morell and Carson as the protagonist and villain make The Plague of the Zombies an enjoyable foray into classic tales of good versus evil. The film looks incredible and it sounds great. As for bonus features, the restoration comparision is interesting to see, and the "making of" featurette brings us behind the scenes with Hammer and film historians, as well as with restoration experts who explain exactly what they've done with the film to make it look so good. The old school "World of Hammer" episode resurrected from the 1990s and ported over from old DVDs isn't exactly illuminating, but it IS narrated by that wonderful old rogue Oliver Reed and his velvet voice. No matter the antics he got into on set, he's always riveting to watch and listen to.

This release is one that isn't for everyone, but for those who want to fill in their home Blu-ray libraries with films of a certain age and innocence -- or for Hammer Horror collections -- this highly enjoyable (try not to grin when the lead zombie cackles and tosses dead Alice into a ditch) release of The Plague of the Zombies is for them. Enjoy!

The Plague of the Zombies is out on January 15 here in North America. You can check out the weird trailer for this weird old film, as well as pre-order and see more info on the film at Scream Factory's page here.

Do you feel this content is inappropriate or infringes upon your rights? Click here to report it, or see our DMCA policy.
Hammer HorrorScream FactoryThe Plague of the Zombies