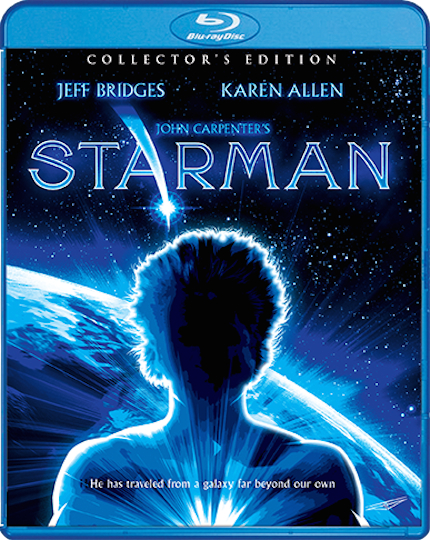 Starring Jeff Bridges (The Big Lebowski, Bad Times at the El Royale) and Karen Allen (Raiders of the Lost Ark, Scrooged), John Carpenter's science-fiction romance Starman hit the screens in 1984. In Starman, an alien crash lands to Earth, and to survive and blend in, takes on the form of the first human image in its periphery -- in this case, the image of Jenny Hayden's (Allen) sadly deceased young husband (Bridges).

The alien convinces Jenny to drive him several hundred miles to a pick-up point in Arizona, where he must meet up with his brethern before the atmosphere here on Earth sickens him to death (I'm with you, dude). Of course, this walking, breathing doppelganger of her dead husband scares and shocks Jenny, but she eventually gets over it -- because without the need for adventure, we don't have a movie.

Along the way, the pair run into, and afoul of, a gang of meathead hunters, as well as the cops and the FBI, all in a race against time. Maybe it's the CIA, I can't recall, but they're your basic government goons. The difference is that one of them, Mark Shermin (Charles Martin Smith), has a good heart and intellectual curiousity, and doesn't want any harm to come to the alien.

Excellent acting combine with awesome special effects and fantastic directing from Carpenter, as well as a very well-written script. This means that Starman, for the most part, holds up extraordinarily well as a universal story, and especially for a film over three decades' old. The story could prove a bit hokey for some viewers, but for most, mainstream viewers in particular, the film should be well-received.

An aside: this was one of the earliest films I saw in the theater, and while I can't say I exactly recall how it looked over 30 years ago, I CAN say that this release looks positively miraculous, with nearly no imperfections and a glorious, vivid picture. The sound is also fantastic. This is probably the best Starman has looked since its theatrical release, and if you're a Carpenter, Bridges, Allen, or sci-fi film fan (or all of the above), you'll want to pick this recent release up to bring home.

The special features on this release are great. It's always a pleasure to listen to Carpenter discuss his work, and here, we also get to hear from Jeff Bridges (who was nominated for an Academy Award for his role), as well as actor Charles Martin Smith, and then-script supervisor, now producer Sandy King-Carpenter. It's no small feat to get them all for an interview, but it happened, and this release is all the better for it. The only way it could have been better is if Karen Allen had been available, but beggars can't be choosers.

This release comes highly recommended, particularly if you're a Carpenter collector and have never owned this film before -- you can't go wrong. You can order this collector's edition directly from Scream Factory and check out the Starman trailer on their site here.

Do you feel this content is inappropriate or infringes upon your rights? Click here to report it, or see our DMCA policy.
Jeff BridgesJohn CarpenterKaren AllenScream Factory