It’s a season of Welles with THE OTHER SIDE OF THE WIND on Netflix and THE MAGNIFICENT AMBERSONS joining the Criterion Collection. 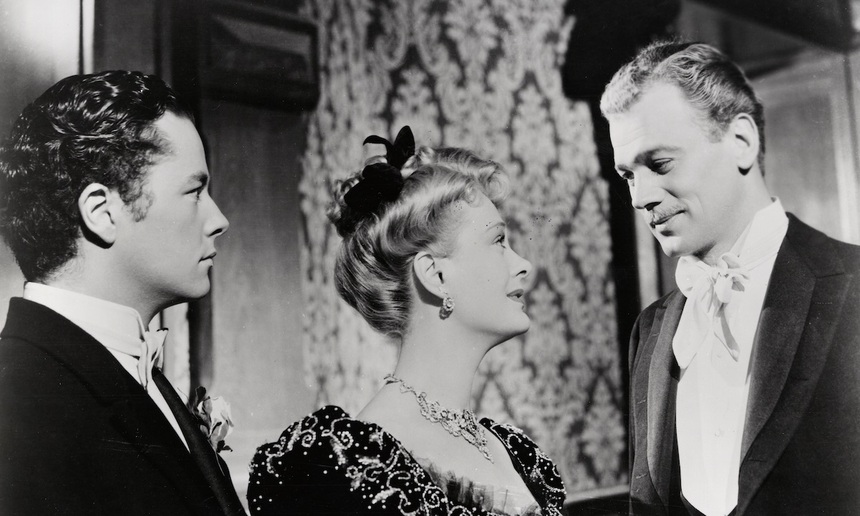 Has a movie ever had a more compelling opening twenty minutes than Orson Welles' The Magnificent Ambersons? The director's 1942 follow-up to the "best film of all time" Citizen Kane (and, perhaps therefore, the ur-text of the supposed "sophomore curse" that haunts filmmakers to this day) establishes its world, its tone, its characters, and its appalling balance of irony and melancholia with a rat-a-tat efficiency that feels as fresh now as it did nearly eighty years ago.

After an amused prologue setting the stage, we are treated to a set piece par excellence. Even excised of its midsection -- Welles' original design for the complex party sequence at the Minafer/Amberson home was a long take that would have carried audiences from ground floor to attic -- the Christmas ball is splendid and visually revealing at a level that even Kane is often hard-pressed to match. Bratty white boy George Minafer, painfully slow on the uptake and pathologically unable to see beyond the end of his own nose, wends in and out of a social universe that is defined entirely by emotional relationships that are simply too vulgar and human for his limited imagination.

An inventor of automobiles named Morgan once loved George's mother but failed to woo her; he has returned to town now, years later, with his own daughter, who is more loyal to her dad than she could ever be to a rude, gormless rich kid. George's overprotective mother, and exquisitely repressed aunt, orbit Morgan like twin stars, and a tale of a broken cello -- told by Welles himself in knowing voiceover earlier in the picture -- gains more and more dramatic weight as the picture moves along, a skittering of small stones that begins an avalanche down the mountainside of the Ambersons' lives.

The worst thing about The Magnificent Ambersons -- and the great question-mark that has defined it, nearly since its release -- is whether the second and third act's failure to capitalize upon the first is the result of studio interference (which was significant) or merely endemic to the project itself. Certainly, Ambersons never works up the same brio again as it does in its first third. Deprived of almost an hour of its run time and slapped with a high-key, sentimental ending that was shot by the studio while Welles was in Brazil, The Magnificent Ambersons dribbles away like a low, wet fart in its final moments, even as both of its lead characters -- George and his spinster aunt, Fanny -- are given apotheoses that go off like performance fireworks even today.

Reconstructing The Magnificent Ambersons, whose missing footage was not just removed but destroyed by the studio, has been the cineaste's favourite shell game for over half a century. It can't be done, but packages like Criterion's redress of the film (spine #952, a long-awaited inclusion in the collection) let you pick at that wound all over again.

Exhuming the lost potential of Ambersons while enshrining the film we do have is a delicate balancing act, but Criterion carries it off well. The 88-minute cut of the film is, of course, splendidly captured here, from a new 4K transfer which shows moderate signs of its age but is quite watchable, particularly (again) in early sequences where Welles experiments with silent-era conceits like portrait framing and irises.

The supplemental materials, meanwhile, are called upon to both analyze the project as a whole, and paint an intriguing picture of what might have been. Actor Simon Callow (Four Weddings and a Funeral), an avowed Welles fan and biographer, gives a 25-minute talk about the whole production of the movie, offering a counter-myth to the "evil studio" narrative that cinephiles love to wrap around Ambersons -- pointing out that Welles scarpered off to Brazil to become obsessed with his next project, It's All True, and wholly abandoned The Magnificent Ambersons (in a time of war, no less) to a studio who could neither reach him nor make sense of their moody, elegeic nostalgia piece about how American industry had destroyed civilization (again, to be released in a time of war).

Critic and Welles scholar Joseph McBride gives a more detailed view in another program, offering Welles some clemency on this point. He reconstructs some studio-level scheming (via transcribed telephone meetings) to fire Welles from It's All True for going "over budget" when he was in fact almost half a million dollars under. McBride is a dry character but his bench of knowledge is deep, and he even goes so far as to recreate the intended final shot of The Magnificent Ambersons, from memory, as a cocktail-napkin doodle.

Such a flourish would seem absurd in the special features of any other project, but is indicative of the playing field that Ambersonologists have to work with when trying to assemble a sense of what the director's cut of Ambersons would have been like. Indeed, a separate video essay, on Bernard Herrmann's score, notes that the truest version of the 131-minute cut of Ambersons that still exists is the film's cutting-continuity script.

Welles himself makes a couple of appearances in the supplements, first in a half-hour Dick Cavett Show interview where Welles seems almost painfully camera-shy and contrite; and later in excerpted audio interviews from Peter Bogdanovich's fabled conversations with the director, which would go on to form the spine of Bogdanovich's book about Welles, This Is Orson Welles.

Marvelously, the disc also contains Welles' radio production of The Magnificent Ambersons, along with another program, Seventeen. And if you're into comparing Ambersons productions, a 2-reel silent film of the same story (not made by Welles) is thrown in for good measure.

The blu-ray package is unusually replete with written work. Six full essays -- including one by Welles himself -- are beautifully printed in a faux-screenplay pamphlet. Critic Molly Haskell asks (I think, cannily) whether the stories 131-minute version of Ambersons would truly have improved on the 88-minute cut, for all of the latter's gross imperfections. Geoffrey O'Brien considers Booth Tarkington's source novel (and Tarkington's purported relationship with Welles' father, upon whom Welles claims Cotton's character in Ambersons may have been based), while Luc Sante and Farran Smith Nehme consider Welles' filmic style and (literal) voice, respectively.

A reprinted Vogue Paris passage by Welles, written in the 1980s, describes his father's life and death, and contains the extraordinary phrase, "thus he lived to a great age before setting himself on fire."

Do you feel this content is inappropriate or infringes upon your rights? Click here to report it, or see our DMCA policy.
Citizen KaneOrson WellesRKOThe Criterion Collection

More about The Magnificent Ambersons