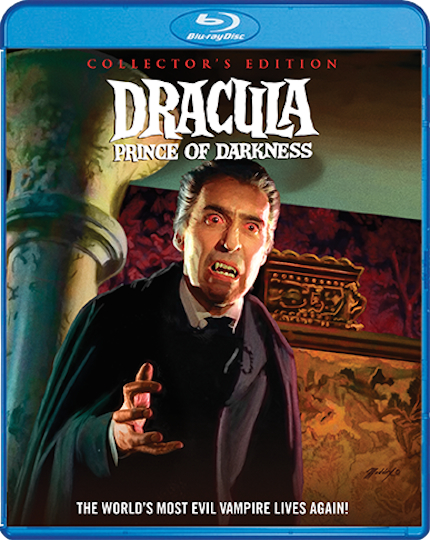 Scream Factory is so much fun. They're resurrecting amazing classics and underseen favorites on Blu-ray for those who've seen them and love them, but also to new generations of weirdo film fans that have yet to discover such films. One of these recent releases is Hammer Films' Dracula: Prince of Darkness, the 1966 sequel to their hit Horror of Dracula, which starred Christopher Lee, Peter Cushing, and Michael Gough. Whereas the original was directed by Jimmy Sangster, this sequel was helmed by Terence Fisher. Sangster gets a writing credit for the sequel here, which illustrates how much of a family production company really was. It's been talked about, but the credits really "hammer" that home.

This release of Dracula: Prince of Darkness from Scream Factory has two versions, which are interesting to compare --- the U.K. version from StudioCanal and the U.S. version, which has a new 4K scan from the interpositive buried in the 20th Century Fox vaults. I have to say --- gasp! --- that I prefer the StudioCanal version. It's much cleaner and brighter. The new scan contains a more "filmic" quality and look, yes, but there's lots of heavy grain here, and to me, the Dracula: Prince of Darkness U.K. version from StudioCanal is the best that has ever looked, not having been alive in 1966 to have seen a fresh print in the theatres. Both versions offer great sound quality.

The film itself harkens back quite a bit to Bram Stoker's original story, with travelers being picked up by a driver-less carriage and being brought to a castle without explanation. The four upper-class passengers are then served by a gaunt man who admits that his master is dead and that instructions were left to provide hospitality to any passing travelers within the region.

This after being warned by a monk never to stop in Karlsbad, especially at the castle. The usually stoic Helen suddenly gets a bad feeling about everything, but she's ignored, because of course she is. But hey, if a woman and her fear are NOT ignored, then we get no movie --- unless the writing subverts tropes and manages surprising the audience, but that's not the case here.

Anyway, for some, the film will be too predictable and too slow, but for others, especially for those who enjoy the nostalgia of Hammer Horror, Dracula: Prince of Darkness is catnip.

I haven't been able to get to the no-doubt awesome commentary yet, but the 8mm behind-the-scenes footage was interesting to see. There's also a "making of" with talking heads and the re-issued "World of Hammer" episode from the 1990s here. The trailer for the film as a double feature with Scream Factory's other recent release/re-issue Plague of the Zombies is a hoot.

Have a fun time checking out the trailer for Dracula: Prince of Darkness as well as more info on this release from Scream Factory here.