ZOO: Saving A Marriage From The Zombie Apocalypse In The Trailer For LFO Team's Latest 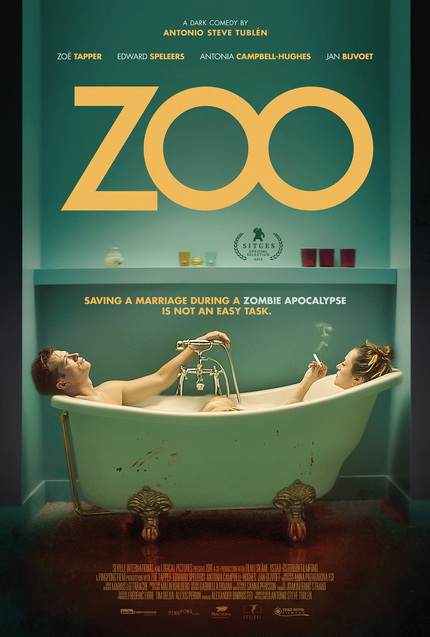 Marriage is hard. That's the basic underlying premise of Antonio Tublen's latest genre mashing feature film, Zoo. But is it helped or harmed by the outbreak of a zombie apocalypse? That's the question that drives us through.

Tublen has been a favorite in these parts for years now, his work always embracing genre elements in intriguing ways while also finding means to flip things on their head. His ultra lo-fi sci-fi feature LFO won him a lot of fans on the festival circuit and Zoo shares a lot of that film's 'enormous ideas in a tiny package' approach. And coming off a successful premiere in Sitges I would expect this one to be off to a lengthy festival run now as well.

Karen and John have lost the spark of married life the day they were notified that they were unable to conceive. Now they almost live like the walking dead, imprisoned by everyday life and on the verge of divorce. When the world is hit by a pandemic that really turns people into zombies, the couple have to lock themselves in their apartment, waiting for rescue. While the world outside is falling apart, they are forced to find their way back to each other and reclaim their lost love.

Zoë Tapper, Edward Speleers, Antonia Campbell-Hughes and Jan Bijvoet star. Take a look at the first trailer below to get a taste!

ZOO - TRAILER from PingPongFilm on Vimeo.

Do you feel this content is inappropriate or infringes upon your rights? Click here to report it, or see our DMCA policy.
Antonia Campbell-HughesAntonio TublenEdward SpeleersJan BijvoetLFOTrailerZoë TapperZombieZoo