REVIEW: The Desert Bride is a notably convenient marriage of confusion and contemplative companionship for its wandering heroine 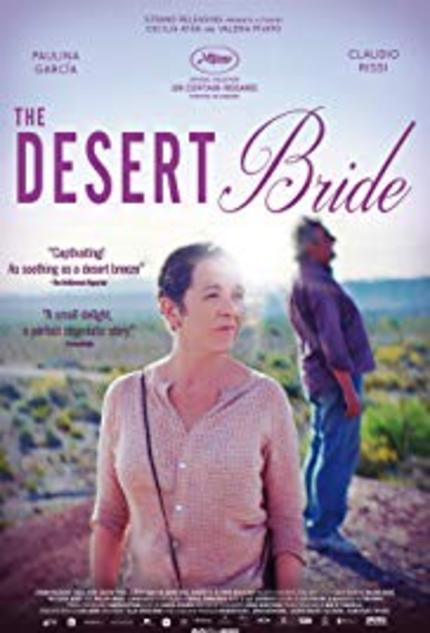 Argentine co-directors/co-writers Cecila Atwan's and Valeria Pivato's reflective South American arthouse gem The Desert Bride (a.k.a. La Novia del Desierto ) presents an absorbing, truthful, and observational character study of a radiant middle-aged woman forced to embrace unprepared independence after her professional stability collapses leaving her suddenly vulnerable. This low-key, noteworthy soul-searching romancer is undoubtedly profound and passionate in its depiction of a Chilean working-class maid forced to go on an uncertain journey and leave the simple and safe comforts of her existence behind. As inquisitive filmmakers, both Atwan and Pivato skillfully concoct a quiet, sincere and gently witty dramedy that aptly represents new beginnings yet elusive expectations for an exposed woman clinging to her emotional rebound.  The Desert Bride is simply poetic in its search for the security of romantic connection within the confines of an adventurous Spanish road trip fable. Pleasurable and intimate, this particular Bride deserves a ring on her resourceful finger for this delightful desert dance of solid self-discovery.

Teresa Godoy (played wonderfully by Paulina Garcia) is a 54-year old domestic worker that toils on a daily basis for a Buenos Aires-based Cid family. She goes about her business acting as a diligent housekeeper while performing her repetitive cleansing chores. In an early scene, we get a sense of pending doomsday inevitability when Teresa is chastised by her employer as she proclaims that the destitute family cannot afford to keep Teresa on-board for her maid-related services much longer.  Nevertheless, the timid and petite Teresa continues to do her job despite the pushiness of her uptight boss. Feeding the caged bird, changing bedsheets, doing laundry, serving the refreshments...the dutiful Theresa carries onward despite her hidden strands of doubt, anxiety and to a certain degree helplessness.

The film opens with Teresa and her fellow busing travelers overcome with a transportation crisis as they are walking collectively along a dusty winding road due to a freakish bus breakdown concerning a wayward bird. So we now are aware of the frequent flashbacks concerning Teresa's jeopardized employment with the Cids in comparison with her current troubles of heading to her new destination in San Juan for other job-related opportunities. Broken, missed, and/or delayed buses--the unluckiness of Teresa venturing on to her next assignment takes its inconvenient toll. Naturally an attractive older woman, one can still see the weariness in Teresa's worried face and the fatigue glistening in her seemingly saddened eyes.

Unfortunately, a tired and trusting Teresa is convinced by a persistent and complimentary vendor named Miguel a.k.a. "The Gringo" (Claudio Rissi) to try on one of his clothing merchandise in his cluttered trailer. Quite hesitant at first, Teresa decides to do so before being abruptly interrupted by Gringo that a storm was brewing and he needed access to the vehicle. As the panicking starts to sweep the nighttime marketplace, Teresa realizes that she left her bag of belongings in the now departed Gringo's trailer. Understandably, she is petrified as desperate efforts are being made in the tremendous breezy storm to seek the whereabouts of the absent Gringo so that she can retrieve her treasured property. Sadly, no one wants to accommodate her due to their plans for immediate evacuation. Sadly, a dejected Teresa is now alone in the stormy darkness of a restroom not quite knowing what her next move would entail in reuniting with both her bag and the smooth-talking Gringo.

Soon, Teresa gets somewhat of a break the following sunny day when she is told by a vendor that Gringo is usually located at Muela's Place. The arid trek has Teresa footing it in rocky terrain as she continues to have difficulty assuring her new boss in San Juan that she is en route despite the heartaches and headaches of her travels. When Teresa meets up with fellow Chilean Muela at his cafe he directs her straight to Gringo's trailer. However, Gringo provides the bad news that Teresa's bag is not inside of his vehicle after all. How can this be when Teresa swears that she left her stuff in his van as she was rushed out during last night's storm? Now, what is she to do from here?

Gringo does suggest some hunches as to what may have happened with Teresa's personal things in her missing bag. Perhaps he inadvertently sold her stuff without realizing it? Maybe he packaged her bag along with other merchandise earmarked for other vendors? Could it be that Teresa is mistaken about her bag being in Gringo's possession in the first place? Generously, Gringo invites Teresa along to ride with him on the road to figure out what she will do next regarding her absent bag. Clearly, Teresa feels awkward in the company of Gringo in the middle of nowhere in the desert. Nevertheless, Gringo tries his best to get the serious-minded Teresa to open us a bit and discuss her personal insights if their trip together is going to be somewhat tolerable.

Atan and Pivato (along with writing collaborator Martin Salinas) assemble a quaint showcase of storytelling that is serene and meditative. Wisely, they never try to make the film more than it should be at heart--a slow burn romance featuring matured blue-collar workers eeking out a meager living in perceived loneliness and undermined despair. The deliberate slow pacing is just fitting for this life-affirming look at defining connections of the unfulfilled traces of affection. It would be easy and unfair to dismiss the contemplative Bride as a slow-footed, melodramatic road-bound romance bouncing from Point A to Point B. Indeed, this would be a disservice to the meticulous writing and well-acted turns for capable leads Garcia and Rissi that carry this motivational movie with unassuming grace and rhythmic candidness.

Specifically, Teresa is softly wounded and guarded but one cannot escape how resilient and understated Garcia's applauded performance is in bringing this soulfully-sealed maid outside of her psychological shell. Rissi's Gringo perseveres as his stillborn existence is peppered by the leftover sold goods that bombard his methodical day-to-day livelihood. Together, this disenchanted duo gradually come alive and their formulaic pitstops to interacting with others as they find solitude in one another can be overlooked creatively. Refreshingly, The Desert Bride's ultimate payoff is its willingness to grasp the consciousness of aging womanhood once resigned to its stagnant confines.