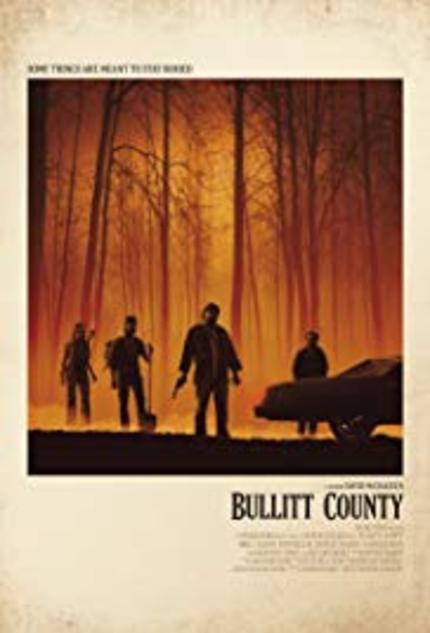 Writer-director David McCracken's nostalgic southern backwoods thriller Bullitt County is effectively unconventional and unassuming as it touches bases with its revolving door into every imaginable fiber of mayhem it can cleverly muster up. As a macabre drama steeped in the psychological confines of its morbid mysteries that range from heavy-handed guilt to brewing betrayal, Bullitt County strikes a disturbing chord that registers so cerebrally for a low-budgeted, erratic rural potboiler that triggers sophisticated themes such as alcohol addiction and the solidarity of questionable friendships.  McCracken's creative topsy-turvy script and the atmospheric tension it provides in its edgy storytelling gives Bullitt County its riveting rawness as a compelling character study set against the bloody boundaries of organic thrills.

Indeed, Bullitt County dabbles in its familiar share of creepy-minded cliches, random flashbacks, and other suspense-driven techniques to drive along its jittery narrative. Still, McCracken manages to poke further into the soul-searching aspects of his flawed protagonists. Thus, the authenticity of the anticipated chills is just not relegated to the actual heinous acts of the participants involved but the genuine mindset of the participants' psyches that compels them to react irrationally. Armed with convincing traumatic performances, genuine concerns for telegraphed scares and intrigue plus the heightened ingredients of greed and distrust, Bullitt County is wired for a mundane explosiveness that lingers on the nerve. Certainly, the orchestrated twists and turns in McCracken's firecracker fable should suffice for an aftertaste of legitimate jumpy titillation.

It is the fall of 1977 in Kentucky where long-time friends decide to gather together after a decade to partake in a bachelor party for alcoholic Vietnam vet Gordon "Gordie" Solomon (Mike C. Nelson, "Minutes Past Midnight"). Gordie, celebrating his tenth year of sobriety, holds some shocking personal baggage that has seemingly haunted him until the present day. Gordie's off-and-on temper stems from hints of the war perhaps or for his hidden attraction to his female buddy Robin (Jennie Melear, "Your Friends Close"), one of the visiting pals here to celebrate his upcoming nuptials. Robin had previously met up with another one of their friends in Scott Keaton (McCracken who also acts in the film). Also, Gordie's new friend Wayne (Napoleon Ryan, "The Master") has joined in for the gathering. Nevertheless, Gordie's real perplexity from the past will rear its ugly head concerning his trio of so-called friends (the major revelations will not be spoiled in this film review).

When the four friends decide to revisit their old drinking hole hang out they are surprised that the venue had changed into a snooty winery for the locals. It is at this place where they learn about the legendary loot that was buried on the private property of the Bullitt clan during the Prohibition era where obviously the treasure was ill-gotten gains. The original plans for walking the Kentucky Bourbon Trail for distilleries has now taken a backseat to the curiosities of potentially searching for that missing jackpot on forbidden Bullitt land. It is understood that no one dares to even think about getting any notion toward recovering that sacred stash in the woody Bullitt grounds. Nevertheless, this does not stop the moody Gordie and his cohorts from doing just that--defying any warnings and determining to dig for the fortune from yesteryear.

For the most part, the first half of the film breezily marches on while showing slight comical interactions among the pals. They drink, prank one another, sing, scheme and talk trivial shop about James Joyce and their reverence for Batman (give yourself extra points for picking up on the inside joke of the Batman-related named characters...you know...Wayne, Robin, Gordon/Gordie, Keaton as in Michael Keaton's Batman). With the exception of Gordie's brief raging issues here and there the jocularity among the friends seemed refreshingly out of place for a thriller involving deception and despair.

However, the film's tone shifts into sinister gear in the second half when the gang meets a welcoming aged couple roaming the woods known as Mr. and Mrs. Hitchens (played by veteran performers Richard Riehle and Dorothy Lyman). Soon, things start to unravel when the old folks are not who they seem. Thus, Gordie and his associates are sent in the panic mode. It is about this time when the dissension builds and the pressure of secrecy, loyalty, paranoia, and deceit starts to rear its ugly head. Gordie has completely lost his mind and the decade-old sobriety is thrown out the window as the poisonous alcohol has now fueled his sadistic tendencies. Murder, money-hunting, mischievousness--not exactly what solid bonds of friendship are built on.

For a small-scale suspense yarn set in a woodsy wasteland, Bullitt County packs a corrosive punch that weaves back and forth so decisively. McCracken's imaginative injection of perverse playfulness, desperation, and disillusionment make for a rare period piece that manages to balance its impenetrable shock value to a decent exposition of alarming forethought. The ravages of war, alcoholism, alienation, regrettable reminiscences and selfish temptation all make for a tasty stew of cutthroat confusion. Surprisingly, the well-acted performances show three-dimensional range in angst and anxiety--something rarely not seen in psychological thrillers mainstream or independent. In particular, Nelson's Gordie conveys the believability of a broken man shattered by his affliction for self-destruction whether it lies in the bottle or for his unrequited affections for the unattainable Robin.

McCracken's filmmaking experimentation of the aforementioned flashbacks, jump cuts and split screening methods do not constitute anything distinctive or revolutionary per se. Still, his hat-trick as a writer/director/actor is something that is quite encouraging and the probing essence of Bullitt County speaks sound volumes of his talent and artistry.