As a species, ‘we are SCREWED!’ So shouts Assassination Nation, a bleak 21st century pseudo-satire that’s less ‘state of the nation’-critique than it is a doomsday parable that exposes disaffected youth to virulent misogyny in order to yield explosive, controversy-baiting effect.

More than ever, parents are out of touch with their kids, men are possessive of their women (be they wives, daughters, mistresses or girlfriends), online lives are the new #all-important reality and teens weaned on the internet indulge in more nihilistic and/or self-destructive behavior than ever before. Young women may ostensibly brim with confidence and may seem very at ease with their sexuality, but one has to wonder how much of it is in response to the pressures of social media, the constant image feed and the fear of shame the internet generation grew up on.

Assassination Nation has a way of taking very real and relevant concerns about how the day and age we live in has come to warp our sense of self and instantly cranks them up to eleven. It’s brash, bold, stylized, over-the-top and unapologetically in your face. It can be beautiful and obnoxious in equal measure but, thankfully, never becomes fatally self-important and -- save for a monologue that bookends protagonist Lily’s voice-over narration -- Assassination Nation tries to remain free from finger-wagging didacticism. In fact, it even shows (too) great a willingness to check logic at the door in hopes of creating crowd-pleasing, cathartic spectacle.

Through smart use of filters, lighting, (overused) split-screen compositions and ever-present music that’s likely to drop in on the film at the wave of a protagonist’s hand, the film hurls viewers into the lives of a teen quartet we’ll follow throughout: Lily (Odessa Young), Bex (Hari Nef), Sarah (Suki Waterhouse) and Em (Abra). (You’ll often find yourself forgetting the names of these last two since they hardly register as more than sketches of flippant - and hence movie-cool - teens.)

At a party during the opening scenes Bex, Lily’s openly transgender friend, hooks up with her crush Diamond, who insists they keep it hidden from his football bros. Lily herself is revealed as having a douchey boyfriend but also a Daddy on the side, the recipient of rather spicy texts and videos. Assassination Nation is a movie full of secrets that people would prefer to keep private but soon prominent residents of Salem get their data leaked. Hypocrisy is exposed (the town’s conservative mayor enjoys cross-dressing as well as the company of men) and knee-jerk reactions take center stage (the high school principal gets accused of pedohilia for having nude photos of his six-year-old daughter).

Lily keeps her calm and doesn’t resort to quick judgmentalism, which neverending info streams like social media encourage, but the rest of the town seems keen to jump on the hate-fueled bandwagon (cue on-the-nose Trumpian chants to remove the principal from office and ‘lock him up’ as a signal of mass hysteria to come). When an anonymous hacker leaks everyone’s dirty digital laundry -- texts, private pics, email correspondence, browser history -- a sense of faux-patriotism gives the men license to return to their prehistoric selves and, united into a gun-toting ‘this is not our country!’-mob, they take to the streets on the prowl for a scapegoat. 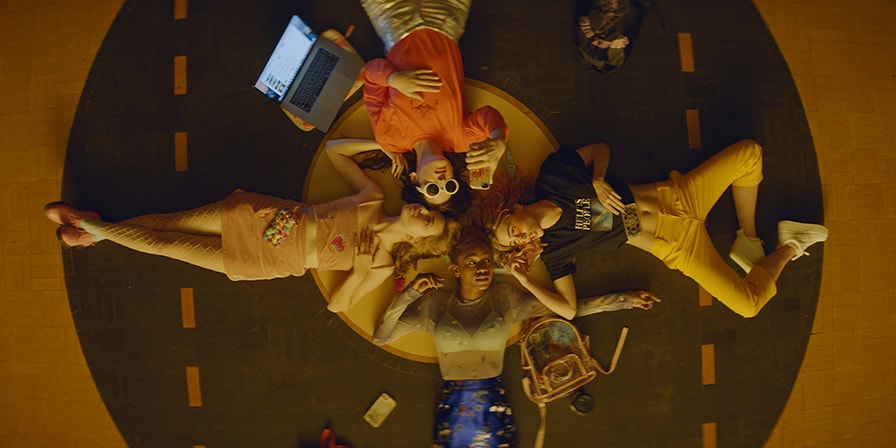 Assassination Nation presents a world on the cusp of a second round of Witch Trials, where a lower-back tattoo is now akin to the mark of satan if it allows ‘inappropriate’ women to be identified and sought out for punishment at the hands of angry men. From their sanctimonious perspective that scoffs at the existence of double standards, Lily is a homewrecker for sexting with a married family man (the aforementioned ‘Daddy’ [a creepy Joel McHale]) and also the baddest bitch in town.

Early scenes, like when Lily is called into her principal’s office to discuss a pencil drawing of a nude woman, can feel like smart vignettes that cover a load of interlaced themes, including disconnect between the worlds of men and women; digital age anxieties that exacerbate teen insecurities that have always existed; the danger of taking images at face value without considering their reason for being. But Assassination Nation can be hard to parse, given writer-director Sam Levinson’s tendency to always swing for the fences and unleash several ideas at once. As a fitting reflection of the internet: it can simply feel overwhelming -- too fast, too furious but also too superficial in its coverage of heavy subject matter.

The third act, once panic has reached fever-pitch, can be accused of dumbing things down and it certainly requires a few leaps in logic to get there, chief among them Lily being fingered as the unlikely culprit of the data hack, with the entire town seemingly very eager to gloss over the fact that she had plenty to lose in being exposed as well, and the altogether baffling scene in which conservative parents slut-shame their daughter and lock her out of the house.

A little too glibly, Assassination Nation jumps ahead by one week and sees the entire town coming after Lily and her pals. Toxic masculinity, transphobia and misogynistic judgmentalism emerge as a three-headed Cerberus of patriarchal reckoning. As dialogue fades and physical performances take the spotlight, some of the film’s most striking camerawork also shines. The Male Gaze is extended into a voyeuristic long take straight out of a slasher (think Halloween’s POV opening) as McHale’s homeboys get ready to storm the castle and ‘Purge’ the town. The resulting tension is palpable.

The ensuing retaliation of the girls, decked out in red raincoats (in reference to Japanese girl gang movies like Stray Cat Rock: Delinquent Girl Boss), escalates at a breakneck pace that strains credibility, but then seething rage and mob hysteria never hinged on rational thought either. Assassination Nation leaves the realm of (already heightened) reality into unfettered revenge fantasy. It’s not looking for answers or solutions but takes giddy pleasure in burning a path with equal amounts apocalyptic fervor and (at least superficially) empowering feminism.

Do you feel this content is inappropriate or infringes upon your rights? Click here to report it, or see our DMCA policy.
Assassination NationHari NefLeiden International Film FestivalOdessa YoungSam LevinsonSuki Waterhouse