Criterion in February 2019: TO SLEEP WITH ANGER, Plus BERLIN ALEXANDERPLATZ and More Euro Classics 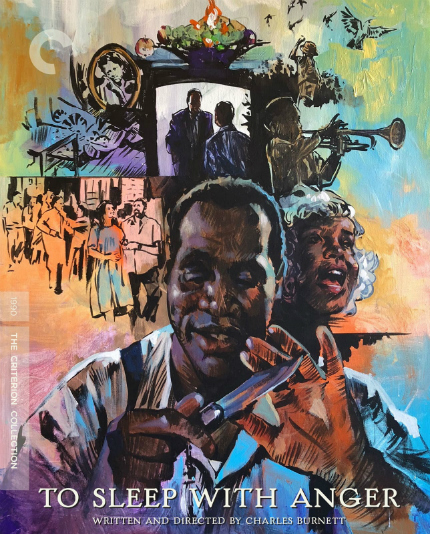 The Criterion Collection will release Charles Burnett's classic drama To Sleep With Anger on Blu-ray for the first time in February 2019, along with four European classics of varying genres.

Of these, Rainer Werner Fassbinder's Berlin Alexanderplatz is the only one I've seen on the big screen, which is odd, since it's the only one of this group that was produced for television! First broadcast in West Germany in October 1980, the miniseries stretches over more than 15 hours.

What memories remain are mostly the opening credits, a lot of German melodrama, and the final episode, which was a trippy excess of very weird proportions. I look forward to many hours of non-drug fueled unpeeling of meaning; Criterion says: "Fassbinder details a mammoth portrait of a common man struggling to survive in a viciously uncommon time." Okay, if you're a Fassbinder buff like me, you know how you'll be spending February.

What about everybody else? To Sleep With Anger stars Danny Glover as a drifter whose mere presence "turns a seemingly peaceful household upside down, exposing smoldering tensions between parents and children, tradition and change, virtue and temptation." Wow! Now that sounds like a sizzling drama.

Prefer an out-and-out thriller? Henri-Georges Clouzot's Oscar-nominated La vérité should satisfy. Brigitte Bardot stars as a woman accused of murder; the film looks back at how she arrived in Paris after suffering misunderstandings and mistreatment aplenty.

"Queer desire and bodily decay" figure prominently in Luchino Visconti's Death in Venice, according to Criterion. Based on Thomas Mann's novella, they say the film is "as sensually rich as it is allegorically resonant."

Meanwhile, Ingmar Bergman's legion of fans will enjoy Shame, hailing from 1968 and starring the dependably outstanding team of Max von Sydow and Liv Ullman as musicians who get caught up in the merciless battles of World War II.

Visit the official Criterion site to learn more about each individual release.

Do you feel this content is inappropriate or infringes upon your rights? Click here to report it, or see our DMCA policy.
Charles BurnettCriterionHenri-Georges ClouzotIngmar BergmanLuchino ViscontiRainer Werner Fassbinder