Sitges 2018 Review: 70 BIG ONES, Crime Thriller That Keeps You Guessing 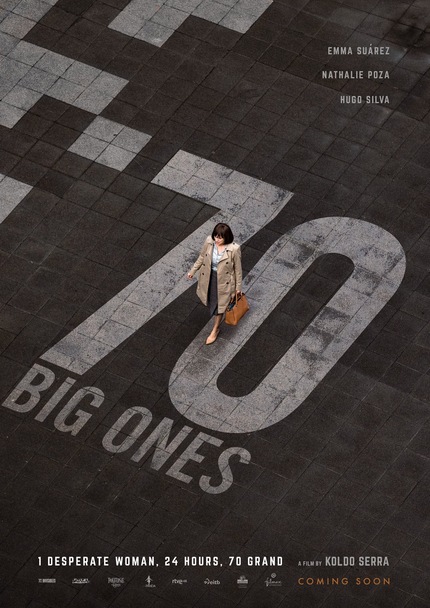 While Spain is slowly emerging from the economic crisis of the early 2000s, it still hasn't recovered completely, and even the most skilled worker can face themselves with extreme circumstances for which they need money. A lot of it. Now.

Such as Raquel (Emma Suárez); her child has been taken from her, and she needs €35,000 (in €500 notes, or 'binladens', called such as no one ever sees them) to get Alba back by the day after tomorrow. And she's on the last bank in Bilbao that might loan her the money; which they agree to, but just as the application gets started, two robbers come packing, wanting the money for themselves. So Raquel must outsmart them or get them onside so she can get her money.

70 Big Ones, Koldo Serra's third feature film, is the best kind of crime thriller: smart, high stakes, a great heroine and an even greater criminal, a story that both keeps you on the edge of your seat and keeps you guessing, plenty of exciting action, some good (and dark) moments of comedy, and an ending that you won't see coming.

As soon as the robbers enter the bank, Raquel has to think fast; especially after one of them, Jonan (Hugo Silva) shoots a police officer. His partner (in crime and love) Lola (Nathalie Poza) is really the one in charge; they want the money to support Jonan's heroin habit and get them somewhere safe. Things might have gone wrong, but Lola is that deadly combination of both smart and homicidally psychotic. Raquel knows she must think carefully to save herself and get her money. She convinces Lola to let her be the one to speak to the police; secretly, she speaks in a code for the police to crack.

The detective in charge, Carlos Garay, and his assistant Eva (Daniel Pérez Prada and Bárbara Goenaga), are calm and relatively collected, and of course want to diffuse the situation. But they are working with a SWAT team, snipers, and one older cop who thinks their crytography methods are a waste of time. As Lola keeps raising the stakes and her demands, Garay must keep the proverbial wolves at bay, even if those wolves occasionally take time out to watch the football semi-final.

The script, by Javier Echániz, Juan Antonio Gil Bengoa, and Asier Guerricaechevarría, is as tight as it is clever, injecting much-needed yet topical humour (such as the Ukranian cleaner who declares how horrible life is in the lauded Western European Union and a bank manager looking to get his 'share), and enough twists to keep you guessing yet keeping the story grounded.

But the real tension is happening inside the bank. Raquel easily takes the lead among the hostages, and while she doesn't completely gain Lola's trust, Lola knows she's dealing with someone who is her equal. These scenes between Raquel and Lola are outstanding, with two actresses matched in their intensity, and opposed in Raquel's calm control and Lola's barely contained violent glee at the situation.

Serra knows the talent he's got in front of the camera, and Suárez shines in the kind of role she's not normally given. Silva is almost unrecognizable as a drug addict barely able to keep it together, and Poza is the perfect psycopath: just smart enough to know she's not as clever as she would like, and makes up for it with cruelty that could be unleashed at any moment.

The score by Fernando Velázquez (The Orphanage, A Monster Calls) is incredible; it matches Raquel's thought process, first in confusion as the criminals enter, then as she works out what to do next, and hits hard as the tension ramps up. Matched with terrific work by cinematographer Unax Mendia (who also worked on Serra's amazing first feature The Backwoods), and it's the perfect mix to amplify the story and performances.

With a superb cast and crew, Serra has given us a terrific film, with intrigue, suspense, action, mystery, and as stated, just the right amount (and right kind) of humour for the story. 70 Big Ones can easily take its place among great contemporary crime thrillers.