Review: VENOM, A Cleaned Up, Toned Down, Baffling Misfire 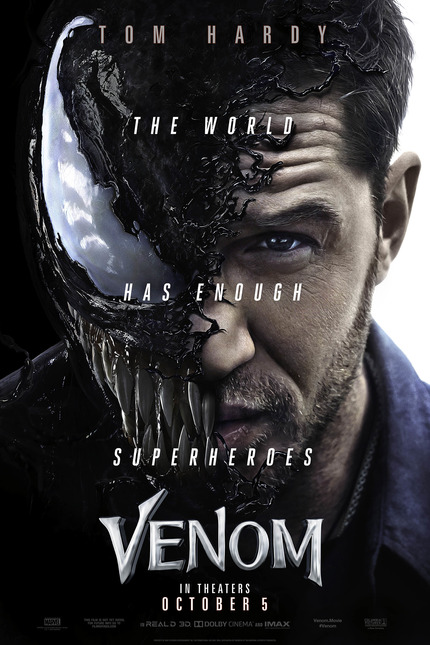 Over the past two decades very few Marvel supervillains have been as visible to non-comic enthusiasts as Spider-Man's nemesis, Venom. Since his introduction to the world at large in The Amazing Spider-Man #300, the evil black goop from outer space has been one of the most popular foes for the web-slinging smart aleck since 1988. Thirty years later Venom is headlining his own feature, a villain as the title character of a major comic book film is a first for Marvel and Columbia Pictures, an experiment that could've been a winner, but the film is let down by a studio desperate for a PG-13 adventure and a script that can't decide on a tone.

When an outer space research vessel comes crashing to Earth with a sinister black goo aboard, the planet is ripe for invasion in director Ruben Fleischer's Venom. The spaceships, funded for research by the Elon Musk-esque Carlton Drake (Riz Ahmed), bring back an alien symbiote that can attach itself to humans - and other beings - in an effort to survive is what is to them, a hostile environment. However, we soon learn that their endgame in landing on Earth is anything but harmonious co-existence.

One of these symbiotes attaches itself to recently unemployed investigative reporter Eddie Brock (a typically mumbly Tom Hardy), and introduces himself as Venom. Brock and Venom are not initially on the same page as the human side of this new duo just wants to find a job and get his ex-girl back, while the alien side is more interested in eating as many humans as possible, including the one he's inhabiting if need be. When another symbiote named Riot bonds with Drake in an attempt to take over the world and cleanse it of the human lower life forms, Venom decides it's time to take sides against his own kind - a decision that isn't explained in any kind of satisfactory way - and the battle for Earth is on.

The makings of an interesting science fiction adventure film are present in Venom, but the way it is put together make the whole thing feel woefully incomplete and tonally schizophrenic. The film careens back and forth between buddy comedy and proto-apocalyptic science fiction in such a ham-handed manner that it feels as though large chunks of connective tissue are missing. Live action Tom Hardy's Eddie Brock is the Dean Martin to Venom's comically fake looking CG Jerry Lewis, and neither completely works. Hardy has mentioned in recent interviews that huge sections of the film - his favorite parts - were trimmed to take Venom from the originally promised R-rated Deadpool style action extravaganza to a more saleable PG-13 neutered version, and the final product definitely feels the loss.

It doesn't help that none of the characters are particularly empathetic in the first place. Brock gets fired from his job as an investigative journalist for taking Drake to task on illegal and unethical human testing. A noble reason to lose one's job, perhaps, except that Brock stole the info from his fiancé Anne's (Michelle Williams slumming it in a thankless role) e-mail. Anne worked for Drake’s company as an attorney, and as a result she loses her job and dumps Brock for causing the whole mess. No one comes out of this smelling like a rose, least of all Brock, who, in spite of having one of the most popular news magazines on TV, can't even seem to find work as a dishwasher yet somehow manages to pay rent in San Francisco - one of the most expensive cities in the world - for six months after losing his job. None of it makes any sense.

Perhaps the most solid performance in the film is delivered by Ahmed, whose Carlton Drake embodies the kind of megalomaniacal hubris required of a billionaire who believes that his solutions are the only solutions to the world's woes. Whereas Hardy and Williams deliver unnecessarily broad performances in their roles, Ahmed's portrayal of Drake is just big enough to make us believe that he believes his own BS. That's not to say that he's good, perhaps he just had better material to work with, as he makes an ass of himself far less often.

With Venom, Columbia is attempting to combine the strategies of Marvel Studios big-fun comic action and Fox's surprise Deadpool success, but without the savvy or vision of either studio. Some of the action is fun to watch, for sure, but for all Venom's talk of chomping off heads - and he mentions it a lot - there is no blood in the film, a sacrifice to the MPAA for that family friendly rating. Plenty of violence is implied, and Venom and Riot certainly create plenty of collateral damage in their sequences, but with a character like Venom, whose trademark is ultra violence and savagery, the film is terminally neutered. What a bummer.

Do you feel this content is inappropriate or infringes upon your rights? Click here to report it, or see our DMCA policy.
MarvelMichelle WilliamsRiz AhmedRuben FleischerTom Hardy