The connoisseurs of all things sleazy at Severin Films have blessed genre film fans with a duo of Blu-ray releases sure to satisfy the most discerning gorehounds this Fall. A double feature of gut-munching, ultra gore masterpieces by Italian legend Joe D'amato, Anthropophagous (AKA Antropophagus, AKA The Grim Reaper) and Absurd, both written by and starring the devilishly handsome George Eastman. 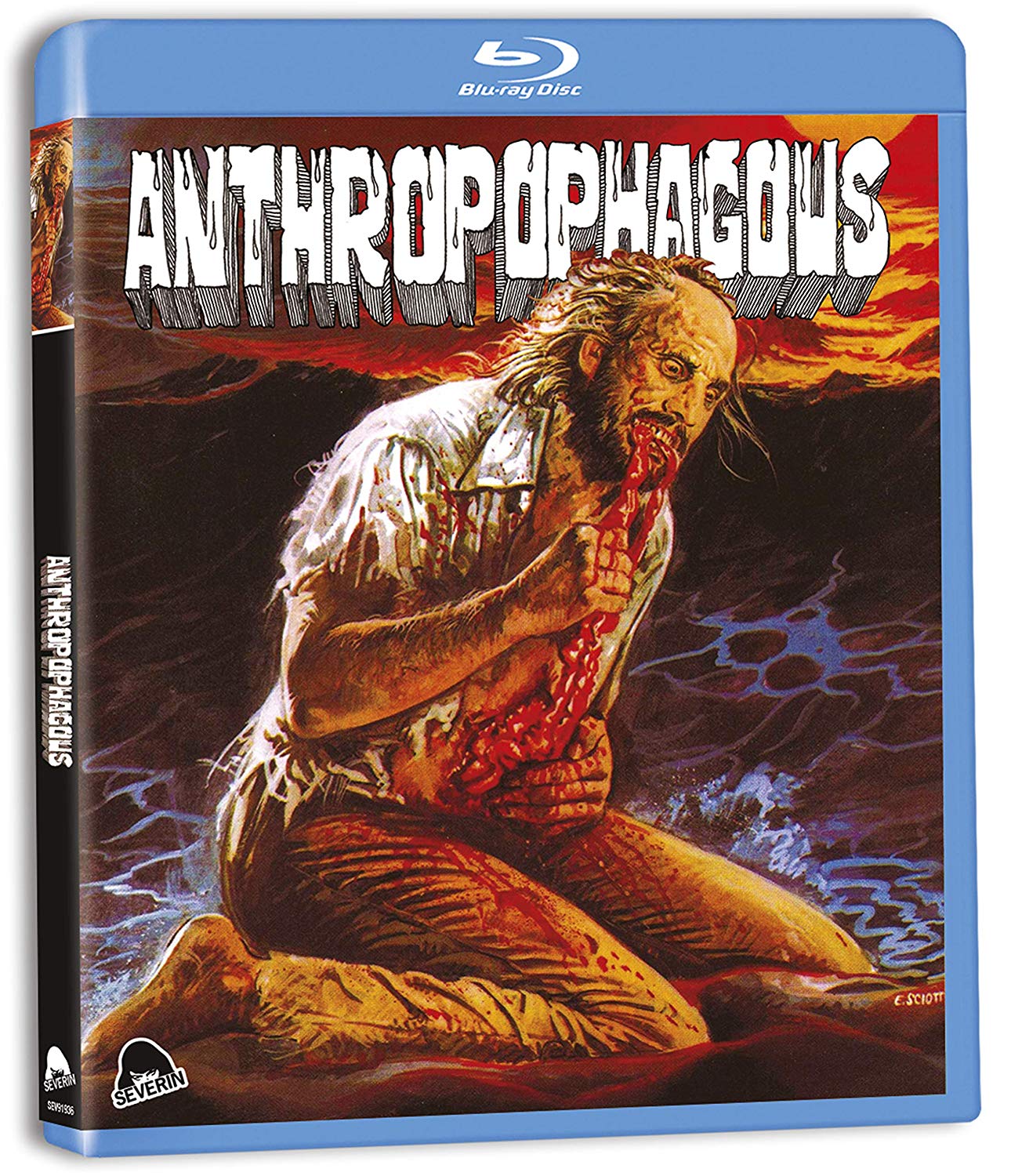 Having previous written about several Joe D'amato atrocities like the Laura Gemser classic Violence in a Women's Prison, I thought I was somewhat prepared for finally tackling these notorious Video Nasties that I've somehow managed to miss for my entire life.

Anthropophagous, a film that is in the running for the title of 'most disgusting Joe D'Amato feature', is a film that more than deserves its impressively repulsive reputation.

Things go horribly sideways for a group of Italian friends who decide to take a trip to Greece for a bit of rest and relaxation. The troop, including an expectant couple, a tarot card reader, and a random hanger on, end up on a largely abandoned island in the off season. Very shortly after arriving, they find themselves the prey of a nasty, violent killer with a taste for human flesh. Several of the friends head off to explore the abandoned township and one by one fall prey to a savage cannibal killer, who wants nothing more than to consume them all, body and soul.

Anthropophagous is a product of a very unique time in Italian genre cinema. Made in the midst of both the cannibal and zombie booms of the late '70s-early '80s, the film straddles the two genres and incorporates the most disgusting aspects of each into a film that is sure to shock and sicken most viewers. Personally, however, I found it to be very entertaining. The Italians were never ones to skimp on the gore, whether it looked good or not, and with this film, FX artist Pietro Tenoglio was given carte blanche to create some truly disgusting effects and his results are wonderful. Not to give away too much, but the literal gut-munching and a particularly nasty end for a pregnant woman are particular highlights of this gruesome feast.

The film was written by legend of Italian genre cinema, George Eastman (Luigi Montefiore), who also appears as the titular Grim Reaper. Eastman was a multi-hyphenate in a time when Italian genre cinema couldn't churn out product fast enough for the market's demands. He appears on screen only for about thirty minutes of the film's ninety minute run time, but his massive six-foot nine-inch silhouette is intimidating by anyone's standards and he definitely makes an impression.

Anthropophagous is one of those films that I'd heard so much about for so many years that I was worried that the reality couldn't possibly live up to the legend, but thankfully I was proven wrong. This is a disgusting little gem, given new life by the heroes at Severin.

Severin Films' Blu-ray release of Anthropophagous may not be the first, but I'm relatively certain that it's the best in the world. Colors and detail are exceptional in this release, giving even more vivid life to the film's gruesome details. They've included both an English and an Italian language soundtrack, and since Italian films of this vintage were invariably post-synced, you can pick your poison.

The team at Severin have included several meaty interviews for fans to pick through. The highlight is an interview with Eastman, who is appreciative but sincerely baffled by the film's continued life among fans. Also interviewed are stars Saverio Vallone and Zora Kerova, along with FX artist Tenoglio and editor Bruno Micheli. It's a comprehensive package that does a super gross film serious justice. Highly recommended. 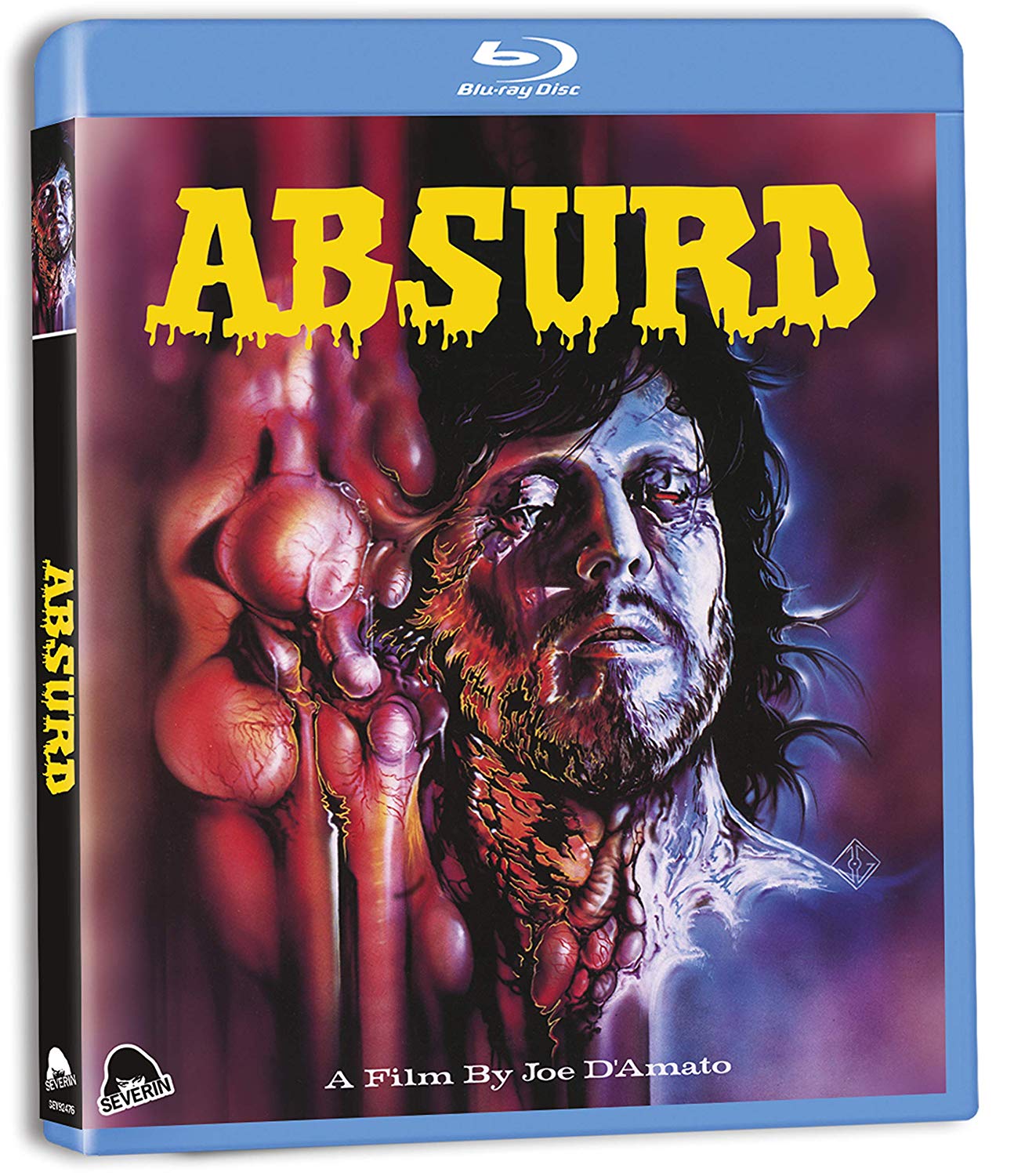 1981's Absurd, also directed by D'Amato, is a kind of spiritual sequel to Anthropophagous in a lot of ways. The film was also written by and stars Eastman as a maniacal killer, and features plenty of killer gore, however, in terms of execution it's more of a Halloween rip off than a cannibal film.

A priest, played by veteran exploitation actor Edmund Purdon (Pieces), is on the trail of a merciless psycho who wants nothing more than to kill. That creature, he believes, is an ancient, unkillable demon. Unfortunately for him and everyone he comes into contact with, no one believes him, which leads to numerous extremely violent deaths. No one is safe, not nurses and not babysitters, in this notoriously violent Video Nasty.

The parallels with Halloween are obvious pretty early on. Eastman's killer is Michael Myers to Edmund Purdom's Doctor Loomis, the main difference here is the degree of violence that the Italians were willing and eager to display in the name of telling their story. There is a level of gore in Absurd that is, quite frankly, absurd, and it is is terribly satisfying for gore-hounds like me. Amusingly, the extended finale in which Eastman's monster plows through most of a dinner party, takes place while a bunch of middle aged white drunkards are watching a football game on TV with hilarious color commentary from the Italian voice actors. It's a thing of beauty.

Perhaps half a step down on the insanity scale from Anthropophagous, Absurd is still a very worthy addition to D'Amato's wildly divergent oeuvre and a film that gore fans will want to seek out.

Absurd's Blu-ray release from Severin is another exceptionally well-rounded effort. In this case there is another, even longer and more insightful, interview with Eastman who is still baffled by the film's continued popularity, as well as an archival interview with D'Amato (Aristide Massacesi), and a brief piece with director Michele Soavi who appears in the film as a biker. It's a very solid release that is an easy recommendation to fans of the Italian gore genre.