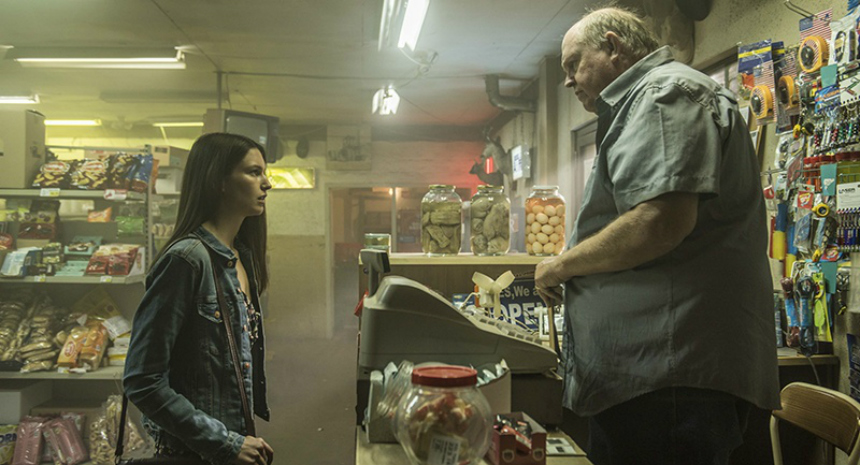 Sometimes a horror movie is so suspenseful that you don't recognize its flaws until later. A midnight viewing of Open 24 Hours not only kept me awake but on the edge of my seat for its entire running time. Director Padraig Reynolds proves that his underrated debut Rites of Spring signaled a solid talent for the horror genre and this film has me excited to see what he comes up with next.

Mary (Vanessa Grasse) has just been released on parole. Her dour Parole Officer and best friend Debbie (Emily Tennant) are her only support system as she faces life after jail for setting her serial killer boyfriend James (Cole Vigue) on fire.

Haunted by her complicity in his crimes, she experiences a near constant PTSD induced stream of gruesome hallucinations and flashbacks. Too bad the only job she can find is at a remote gas station working the graveyard shift, leaving her plenty of time to worry about mysterious phone calls, creepy late night customers and whether or not any of those hallucinations about dear James are, in fact, real.

A film like this rises and falls on the performance of it's lead. Vanessa Grasse resists the urge to paint Mary in simple sympathetic terms. We not only feel her struggles with guilt but are invited to question how much sympathy we should feel for her at all. It isn't written much deeper than that but it's enough to make her character believable and her performance rises above the script showing Mary to be a smart, resourceful person determined to wrestle her demons into submission.

Cole Vigue is an actor who should be on every casting director's radar. He is absolutely chilling here. His costume, a hooded rain slicker is nothing special, but the amount of power and malice he projects through it is. Brendon Fletcher has a nice supporting role as a co-worker who gets dragged into the nightmare

Gas stations are in no small supply in horror movies. The Texas Chainsaw Massacre (1974), High Tension (2003), House of Wax (2005), and Splinter (2008) all make effective use of a gas station. But Open 24 Hours takes place almost entirely in one. It's hard not to giggle a little when you start to suspect the damn thing is impossibly large a la the cabin in Evil Dead II as characters chase each other through various rooms.

It's a reminder that Reynolds isn't taking the movie too seriously but it does bring up another point. Writing this review I had questions about the film's use of PTSD as a plot device.

Reynolds handles it adroitly enough to create a variety of effective surprises, and most viewers are likely to find themselves unsure of what's real and what isn't. But that's about all. He's making a genre film that can't address the issues surrounding PTSD and it might have been better to leave the character troubled but undiagnosed, rather than invoke a real life label that carries so much baggage.

That said, Open 24 Hours is definitely worth seeing if you enjoy gory suspense and action. This is a director who knows exactly what makes the horror genre tick.

Do you feel this content is inappropriate or infringes upon your rights? Click here to report it, or see our DMCA policy.
Brendan FletcherEmily TennantFantastic Fest 2018Padraig ReynoldsVanessa GrasseCole VigueHorror