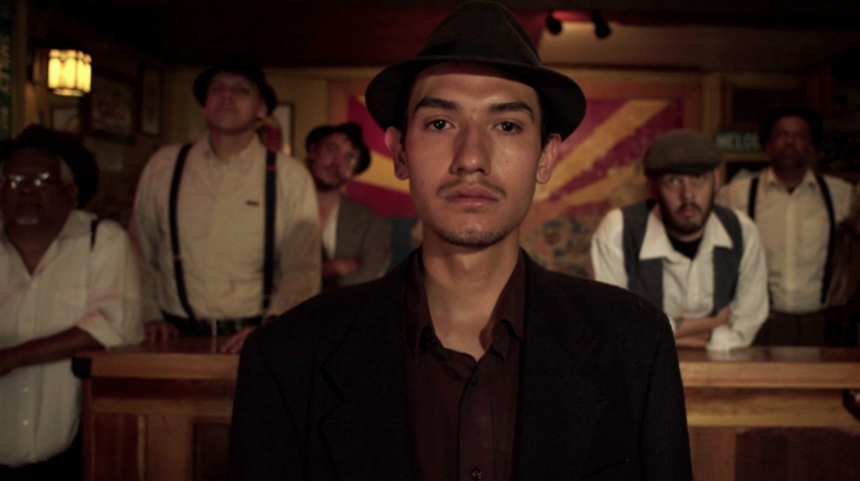 The city of Bisbee, Arizona is nestled between the hills and mountains of the Chihuahua desert, some 90 miles southeast of Tucson, and just seven miles north of the Mexican border. As one winds up the road to Old Bisbee, the vast Lavender Pit greets visitors and residents alike with a strange, other-timely menace, acting as both a gaping wound and as the weapon that caused it.

My first visit to Bisbee was in the summer of 2006, a few short months after I had moved from Los Angeles to Tucson. Over the next couple of years, half a dozen visits were made to this city, once deemed the richest in all of Arizona. Dubbed with the moniker Copper Queen, Bisbee led the export of the mineral for decades, going into double time when America needed ammunition for their troops during World War I.

Today, Bisbee struggles for notoriety, holding to the shadow of its past with equal disdain and admiration. While sister city Tombstone is called "the town too dumb to die," Bisbee is affectionately, wearily called "the town too loved to die." Walking the streets of Old Bisbee one is greeted with contrasts and juxtapositions of uncanny precedence. An easy warmth for the old eccentrics and artisans who live there can be felt buzzing up and down the town. It is quiet and pleasant.

I remember countless hours peeking around alleys and climbing staircases, enjoying the shops and having the best damn pecan pie I ever ate. And yet... a chill runs through me as I recall these enjoyable times. That quiet may be pleasant, but it is just as unsettling. There is an otherness to Bisbee that makes it unique, extra-dimensional, like overlaying a black and white photograph atop a color one, or projecting a video of a building onto the building itself. I can say with conviction there are only two places I have ever been to that indeed feel truly haunted: Shepherdstown, West Virginia and Bisbee, Arizona.

While what I have shared may be deemed anecdotal or tangential to what is supposed to be a movie review, it's actually vital to understanding what documentary-tinkerer Robert Greene is doning in his latest work, Bisbee '17, a film that constantly intersects at the personal and historical, the micro and the macro, ancestry, memory and politics both local and national.

Known for the films Actress and Kate Plays Christine, both rigorous and radical deconstructions of performance, story and truth, Greene returns to Sundance with his most panoramic work yet, a wildly audacious de/reconstruction of the horrific -- and mostly forgotten -- deportation of striking immigrant miners from Bisbee in 1917.

The film unfolds in six chapters, with Greene and his crew building solidarity with the residents of Bisbee as they prepare for the centennial of the 1917 deportation. What is being planned by the filmmakers and townsfolk should be nothing short of cathartic.

In the early days of July 1917, 2,000 men were deputized by the Cochise county sheriff with the task to round-up some 1,200 miners -- mostly Mexican and Eastern European immigrants -- who were striking for better wages and working conditions with the support of the I.W.W. (The Industrial Workers of the World). "The Wobblies", considered one of the most radical groups of the time, were a major threat to the well-being of a patriotic and capitalist town like Bisbee. On the morning of July 12, the deputies invaded the homes of the striking miners and any sympathizers, herding them onto cattle cars, then leaving them hundreds of miles away in the New Mexican desert to die. Each man deported was told by the rifle toting deputies: "If we ever see you in Bisbee again, we'll kill you."

And so in 2017, as July 12 approaches, the residents of Bisbee, Arizona, the Copper Queen, prepare to reenact this insidious event by casting themselves in a multitude of rolls from both sides. While Green's personal politics certainly fall on the left, he is not setting out to make a film that regulates the deportation nor the entire history of the town as black or white, left or right. Working the story across a dozen or so subjects, many tied to the past by ancestors who were hard-lined company men, Greene instead chooses to allow the layered, complex reality bleed through by allowing all sides to been expressed and looked over. In this way Greene allows the townsfolk to become the primary filmmakers and storytellers, taking a somewhat observational stance as men and women share their opinions about the event and who was in the right and who was in the wrong.

Amidst this seven-tier cake of history and remembering, two stories form as the backbone of the film. The first, more nominal one, follows the Ray Brothers in 2017 as they decide to play the parts of their ancestors, also two brothers: one who found himself deporting his own sibling by gun point. As the Ray brothers prepare to inhabit the roles of their dead elders, the sense we get is less of a possession and more a morphic transference of trying to understand ideals and feelings.

Greene's greatest asset though comes in the form of Fernando Serrano, a Mexican-American who has called Bisbee home since he was five years old, but knows nothing of the Deportation. Fernando, with gently piercing eyes and a careful disposition that is very much indicative of his twenty-three years, takes on the role of an I.W.W. striker, and in turn, blossoms into a young man with conviction and power. His new found sense of self and of the town he comes from also helps him confront his own rocky past with his mother, who was deported to Mexico and put in prison for drug smuggling.

As Bisbee '17 builds momentum to that fateful day of July 12, keen-eyed cinephiles will no doubt be reminded of Joshua Oppenheimer's radical recreation of the mass execution of Communists in Indonesia for The Act of Killing. But Oppenheimer's film is far more visceral due to the fact that many of committing to the reenactments were in fact the original perpetrators. Greene's efforts fall largely into a meditative, if near brooding space that pushes dramatization and artifice to the hilt.

In one of the film's best moments, a local desiring to make a musical about the deportation, gets to act out one of his songs with the resources of Greene and his crew. Staged somewhere between dream sequence and court room drama, the men declare their anti-immigrant, pro-capital miasma in a awkwardly amateurish but affecting verse. In this sense, one of Greene's main goals for Bisbee '17 is to deny what is cited by elites as either amateur art and professional art. He is determined to find the serpent of truth wherever it may show its multi-headed self, both hissing and cooing.

The film's timely look at labor and immigration across the vast and uncertain landscape of American history comes to a head in a protest and riot sequence that just about rips the fabric of cinema wide open. With fervor and force, the residents take up their respective roles to frightening effect. It is in these moments where past and present merge in a fever of conflict, neighbor taking up arms against neighbor.

While the company men and strikers are dressed in era appropriate garb Greene does nothing to hide his crew, nor any cars on the street or anything else contemporary. Camera and boom operators circle the swarming crowds as if capturing a current event for the news. By never denying the fact that they are making a film, a recreation, Greene and the residents of Bisbee are able to play up the artifice of filmmaking to the point of transcendence, resulting in a shockwave of catharsis for all sides. But is such catharsis enough?

As the morning of July 12 dawns, the film enters an even stranger pitch, fully operating outside of conventional linear time. It exists in a kind of no-time or all-time, ultimately bringing about what feels like a living ghost town. It is exhilarating stuff, and hard to define without ruining the incredible will Greene is able to cultivate from the dozens, then hundreds and thousands of townsfolk he and his crew find themselves in solidarity with.

If this review feels a bit dense, it is because the film is as well. Greene is not interested in streamlining anything. Just as he is with the residents of Bisbee, he is asking all of us to confront and challenge our notions of cinema, of story, of memory, both personal and collective, and of the very bone marrow of society itself. Greene is very careful to point out that the reenactment of the deportation on its centennial, while bringing to focus a grand many things, does not change what happened, nor what could happen. By the end, we are caught between documentary and narrative, the living and the dead, the left and the right, the why and the how.

So where are we then, exactly? Why walking the streets of Old Bisbee, with echoes of I.W.W. rally songs trailing our footsteps as we go down the long steps and peer into alleyways. It is there where both a great relief rises off our shoulders and a new weight settles in like a shroud, possessive but soft; a friend and an enemy alike. Caressing the trigger of a gun held one hundred years ago and right this very moment.

Do you feel this content is inappropriate or infringes upon your rights? Click here to report it, or see our DMCA policy.
Benjamin Joel CaronCharles BetheadocumentaryMike AndersonRobert Greene