Blu-ray Review: THE BALLAD OF GREGORIO CORTEZ, A Landmark Film 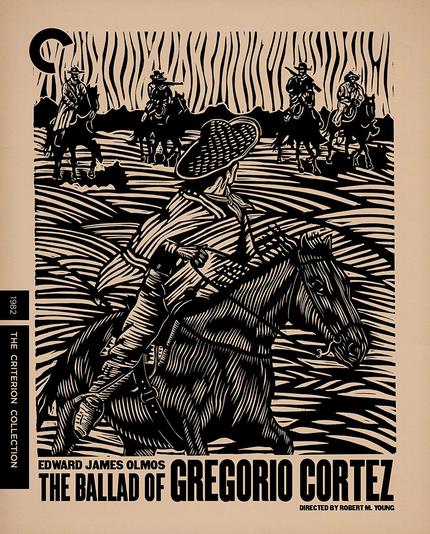 Making its digital home video debut from The Criterion Collection is foundational Latin American themed film, The Ballad of Gregorio Cortez. This 1982 film tells the true story of the titular turn of the century farmer who was arrested and convicted of a murder he didn't commit, all over a matter of incomplete translation.

The film was the brainchild of Moctezuma Esparza, a leading figure in Chicano cultural circles in the '70s, a time when the Chicano identity, that of the American of Latin descent, was gaining visibility. Based on the book, With a Pistol in His Hand, by Americo Paredes, The Ballad of Gregorio Cortez was initially shot as a TV movie for public television. Once the production wrangled in star Edward James Olmos, one of the most popular Latino actors of the time, it was easier to attract other talent. In fact, it was Olmos who brought on director Robert M. Young, who he'd briefly worked with on Alambrista!.

Gregorio Cortez was a farmer who got caught up case of mistaken translation when he is accused of murdering a lawman in rural Texas in 1901. Cortez was accused of stealing a horse, but when he explained his situation in Spanish, the American translator got the statement wrong and attempted to arrest him. After watching his brother get shot in the tussle, Cortez shot back in self-defense, killing the deputy. Fearing the worst to follow what was already a bad situation, Cortez ran, and the law ran after him.

For ten days Cortez was on the lam, hiding with family and friends before he was eventually captured. According to the film, it was while he was behind bars that his attorney asked for a translator who discovered the mistake that caused the whole mess.

Edward James Olmos' Gregorio Cortez is a noble man who just wants to do what is right by his family. He runs to keep himself and them safe, he shot the lawman to protect his brother and himself. Olmos' portrayal of the character is layered and empathetic. The film itself is a hugely influential piece that set the stage for a new wave of Latino filmmakers to try their hand at filmmaking, and helped show exhibitors that films about people of color could make money, as The Ballad of Gregorio Cortez was initially very profitable before being mishandled by a greedy distributor.

A powerful film that establishes the power of language to both unite and unwittingly divide, The Ballad of Gregorio Cortez is a film that is finally getting its due. Hopefully the new Blu-ray release from Criterion will make its way into the hands of those who need to see it most. To understand our present and future, we have to understand the past, and Gregorio Cortez's chapter has been hidden for too long.

Initially shot on Super 16mm, The Ballad of Gregorio Cortez has been restored in 2K by Criterion and the results are impressive. Since the film never got a legit DVD release in the US, there's isn't much to compare this with, but I'm fairly certain that it has never looked this good. The HD image shows a ton of grain, to be expected on this film stock, but looks great in motion and presents a lossless Mono soundtrack that really puts a spotlight on the wonderful synth soundtrack, which was ahead of its time in 1982.

The disc presents a ton of new supplemental materials, including a half hour interview with Olmos, a 20 minute interview with Chicano cinema expert Chon Noriega, and a fantastic 25 minute Q & A from the AFI with Young, Olmos, Esparza, DP Reynaldo Villalobos, co-stars Pepe Serna, Bruce McGill, Rosanna DeSoto, and Tom Bower, and finally a lovely print essay by Charles Ramirez Berg. The extras, which add up to a little more than an hour, are crucial to understanding the context in which the film was made and released. Olmos' solo interview, in particular, describes the environment in which The Ballad of Gregorio Cortez was birthed, and it's a incredible portrait of a long gone time in independent cinema.

This disc is an easy recommendation. Buy The Ballad of Gregorio Cortez.