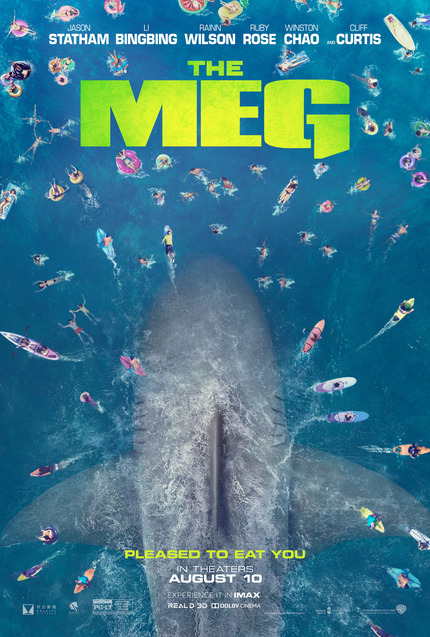 2018 has been a great year for big budget monster movies. Audiences have already been attacked by giant robots in Pacific Rim: Uprising and mutated wildlife in Rampage, and the trend continues with director Jon Turtletaub's latest feature, The Meg.

Adapted from a series of novels of the same name by Steve Alten, The Meg is ostensibly the story of deep sea rescue badass, Jonas Taylor. However, as adapted to the screen by Dean Georgaris and Jon & Erich Hoeber, Taylor (Jason Statham) is just one member of a really solid ensemble project that brings together talent from the US and China to create one of the most exciting adventure films of the summer.

The initial plot is a bit convoluted to explain without giving away too much of the surprise, but the film centers around a deep sea research platform called Mana One. The platform is manned by scientist Dr. Minway Zhang (Winston Chau), his daughter and fellow scientist Suyin Zhang (Li Bingbing) and her daughter Meiying (Shuya Sophia Cai), engineer Jaxx Herd (Ruby Rose), crew member DJ (Page Kennedy, Dr. Heller (Robert Taylor), James "Mac" Mackreides (Cliff Curtis), and a research team consisting of Lori (Jessica MacNamee), Toshi (Masi Oka), and The Wall (Ólafur Darri Ólafsson). They are soon joined by the patron of the platform, a cocky billionaire named Jack Morris (Rainn Wilson).

Almost immediately after Wilson arrives to check out his investment, the trio of researchers take a submersible down to investigate a theory about the Marianas Trench and find themselves trapped below 12,000 meters after an attack by an unseen force. Taylor, retired and still reeling five years after a traumatic rescue attempt claimed the lives of two of his best friends, is called back into action when the behemoth cripples their research vessel.

Taylor has seen this kind of attack before, and lets everyone know right off the bat that it's a megalodon, a pre-historic megashark thought to have been extinct for two million years. At first everyone laughs, but before long, The Meg makes its presence known and all hell breaks loose. After attacking the research platform, the beast strikes out toward a massively populated Chinese beach and it's up to team Mana One to stop it before it kills hundreds of innocent beach partiers.

The Meg never once forgets what it is, and that is a PG-13 animal attack film that just wants to give its audience a good jolt. Turtletaub directs the film with the kind of steady hand that lets the audience know they're in the hands of a pro, luring them into a sense of calm before repeatedly pulling the rug out from under them. A veteran of family friendly adventure hits like the National Treasure series and 3 Ninjas, Turtletaub definitely knows his way around this kind of material. Add a really great ensemble cast who play very well off of each other and you've got a recipe for one hell of a fun ride.

While the entire cast is solid, it is left to Statham to lead the way and he does so capably. Jason Statham may not be much of a thespian, and in all fairness to him he hasn't been asked to stretch his acting muscles in at least a decade, but he knows why he's been called and he delivers reliably. As he bounds from franchise to franchise - The Transporter to The Expendables to Crank to Fast & Furious, etc... - he brings a certain hardassed charm to his heroes that is hard not to like. He's done the favor in The Meg of being surrounded by a cast that is more than able to carry the broader range of emotions so he can focus on the heroics.

Something of a mix between the obvious Jaws influence and the more abstract Armageddon elements, The Meg delivers as many scares as a PG-13 film can handle these days. Much like the early summer adventure of Rampage, Turtletaub and company push the envelope of gory violence about as far as the MPAA will allow. There isn't a ton of human blood or carnage aside from a single dismembered arm floating in the water to indicate the level of violence of which The Meg is capable, but the filmmakers have no problem dismembering and disemboweling fake sea life in the name of shock.

One film that kept coming to mind as the plot continued to play itself out and upped the ante on the potential for catastrophe was the amazing R-rated 2010 remake of Piranha, directed by Alexandre Aja. A lot of similar plot beats are there; the awakening of a dormant species from deep below, the increasing amount of danger as the threat nears larger groups of potential victims, etc. However, with The Meg, the focus is rightfully on the action rather than the violence, giving the audience just enough thrills to keep them riveted, and I have to say it worked on me.

I'm not going to lie, there was definitely a little voice in my head telling me that this could definitely have been more fun with more blood and gore. However, The Meg isn't that film. It's a borderline family friendly shark attack film, something parents can take their teens to without hesitation, and as the parent of a thirteen year old, that's a welcome treat. The Meg is a ton of pre-historic scary fun, and the last big blast of the summer!

More about The Meg