Review: THE DARKEST MINDS, Their Teenage Angst Has A Snore Count 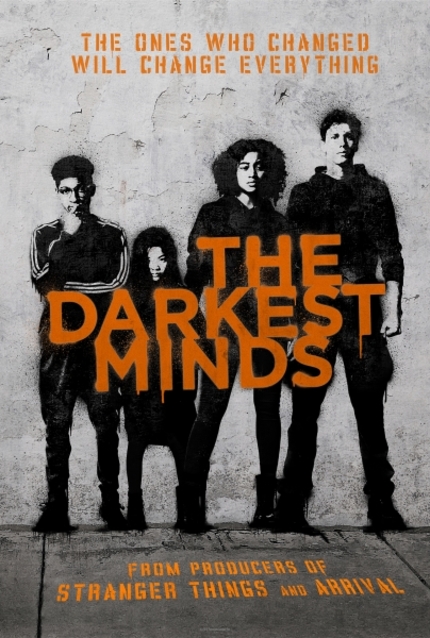 Debutante director Jennifer Yuh Nelson's adaptation of the best selling young adult novel, The Darkest Minds, hits screens across the country this Friday, and anyone looking for something fresh and exciting in the world of teen action films is bound to be disappointed. Yuh Nelson does a capable job with the material she's given, but that material, at least from a screen writing perspective, is pretty weak to begin with, turning what could've been something exciting into a paint-by-numbers potboiler clearly made by committee.

The story of a quartet of super-powered teens on the run from shady government organizations hellbent on manipulating them in their favor, feels like a cast off X-Men story, but with a lot more teenage angst. We begin the film with Ruby (Amandla Stenberg of The Hunger Games) as she narrates a sudden, unexplained plague that wipes out 90% of the youth population, those left behind and immune are found to now have one of five levels of superpowers. These superpowers are conveniently designated by color, which is clunkily explained using what looks like a food pyramid.

The five colors; green (super smart), blue (telekinesis), yellow (the power to control electricity), orange (labeled as "dangerous" on the pyramid, but in practice meaning they can read minds), and red (labeled as "fatal", but really pyrokinesis), can also be determined by the color to which the kids eyes change when they use their power, which makes the next part a bit confusing.

When Ruby survives and is rounded up along with the rest of the survivors and taken to a "rehabilitation camp" in which all of the kids are separated by color (nice), she is able to convince the doctor that she is a green, when she is actually an orange, which would normally be a death sentence. Six years later (!), when the camp finally discovers her secret, she escapes with the help of some alleged freedom fighters and begins a life on the run. She soon meets up with a trio of other kids, and they begin an adventure to find a mythical safe zone where kids can be kids, no matter what the color.

This story is so contrived and telegraphed from the very first frame that it's difficult to get any empathy going for the characters. Ruby and her pals, the blue Liam (Harris Dickinson), the green Chubs (Skylan Brooks), and the yellow Zu (Miya Cech), stomp across the countryside in search of clues as to where this mysterious city overseen by an orange known as Slip Kid (because he's "slipped" the authorities four times, can you hear my eyes rolling?). Once they get there, after just enough nearly-dangerous shenanigans to fill in the 105 minute run time, they discover that maybe this utopia isn't exactly what it seems. Color me shocked.

I get that there is a hunger (get it?) for adolescent science fiction and action, but with The Darkest Minds, this genre may have hit its nadir. Numerous franchises like The Maze Runner, The Hunger Games, and the Divergent films have all made tons of money at the box office, but at least two out of three of those also had novel concepts and the advantage of being at the front of this wave. The Darkest Minds feels like trying to make a dollar's worth of entertainment out of fifteen cents worth of inspiration. The great ideas have been taken, and what's left behind are recycled ideas cobbled together from the most unsuccessful parts of better movies.

Not having read the books, I can't say if that last assertion is true of them or not, but having seen the film, I have to say that the screenwriting leaves a lot to be desired. Rather than focusing on a build up that makes the audience care about these kids, the initial exposition dump setting up the world of the film is done in less than twenty minutes. I understand the idea of wanting to get to the action, and I applaud the impulse, but this film - as we see from the final frames - is designed to be part of an ongoing series, so what's the rush?

As a consequence of this focus on action, the film's impenetrably jargon-y dialogue sounds incredibly hokey in a way that would've been forgivable had the audience been given time to understand what the vocabulary, both oral and visual, of The Darkest Minds meant. Sadly, the dialogue is frequently so stilted that I physically cringed while watching the film. Seeing these impossibly serious teens spouting dialogue like, "only another orange can understand", is painful.

Teenagers are getting more savvy to this sort of thing these days, and while popularity often a substitute for quality when it comes to box office results, I think they will see through The Darkest Minds. In a world of films and TV that is more willing to give this audience what it wants in terms of more challenging material and films that put their characters through some serious emotional turmoil on the way to redemption, The Darkest Minds feels like a super safe cop out that fails to learn the lessons of the successes that have gone before.

Do you feel this content is inappropriate or infringes upon your rights? Click here to report it, or see our DMCA policy.
Amandla StenbergBradley WhitfordJennifer Yuh NelsonMandy Moore