REVIEW: Never Goin' Back examines the raunchy bond of alienated female friendship set against the backdrop of the doldrums 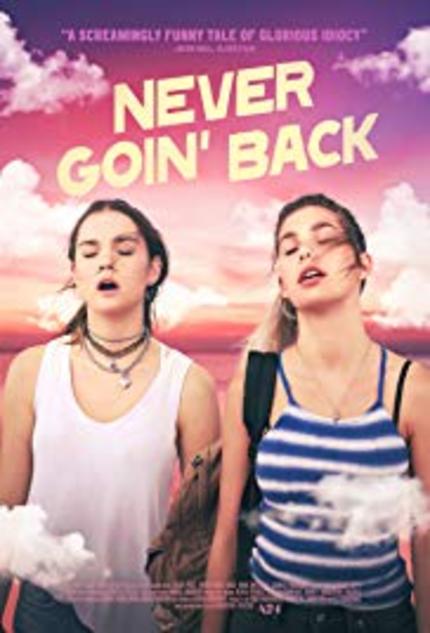 Summertime sisterhood stoner comedies are hard to come by...particularly when they are refreshingly biting and candid in wild impishness. Writer/director Augustine Frizzell's film feature debut Never Goin' Back is gloriously telling in its subversive skin detailing the rollicking trials and tribulations of a couple of Texan teen girls going against the conventional grid in their youthful, stillborn lives.

Frizell, whose artistry has ranged from acting to costume designing, possesses an honest, irreverent and observational eye on the wayward mindset of young female-centric co-dependency attached at the hedonistic hip. Think of a junior-sized Thelma and Louise meets the hyper antics of Harold and Kumar combined with the Cheech and Chong haze and one pretty much has an idea how audacious, playfully reckless and flippant Never Goin' Back is in its acidic spunk. In short, Frizell's unhinged girl-powered dramedy is a cleverly crude blast.

What is rather clever about Never Goin' Back is the effortless way it presents its small-town doomed divas in cockeyed fashion while never undermining the seriousness of these angst-ridden, impoverished females pitted in pockets of desperation.  On the surface, Frizell's smirky gem appears as a gross-out gag targeted for teen-targeted consumption. Do not get it confused--Never Goin' Back giddily dabbles in the all-too-familiar boundaries of low-brow humor triggered by female-driven adolescent shenanigans. Nevertheless, Frizell ensures that the irreverent frivolity never hinders the urgent message about a solid friendship that hinges upon the fragile foundation of tarnished dreams and overwhelming instability. However gently turbulent or trifling Never Goin' Back is in its anchored silliness the realization of destitution and disillusionment feels truthful and authentic to our aimless working-class gals looking to march to the beat of their carefree detached drum.

The story centers around 17-year old friends Angela (Maia Mitchell) and Jessie (Camila Morrone). They are a pair of struggling low-paid waitresses working in a small diner located somewhere in a dusty Texas town. Angela and Jessie seem to be in constant dire straits regarding their lackluster livelihood. Despite being high school drop-outs and penniless they hold on to one main semblance of sanity (or insanity in some cases) that makes them face another unbearable day--their steadfast loyalty to one another.

Both girls, born and raised broke, possess a high-spirited, who-gives-a-crap about the world stance that enables them to delve into outlandish exuberance without any filter. They are young and unbridled by their daily dilemmas that include worrying about coming up with the rent money or toiling at their meager job serving food at low pay.  For the most part, Angela and Jessie are creatures of the moment that blindly revel in the immediate chaos that surrounds them. Remember, the only strength that this tandem has in their control is to lash out at the world that cannot contain them. Angela and Jessie have each other's back...plain and simple. One does not have an issue with crass Angela and Jessie--they would certainly have an issue with everyone else though. Armed with a handy middle finger and toxic tongue for deflection and defense the girls exist in hostility and high jinks to the best of their abilities.

The plot involves the best buddies looking to get away from the stress of the diner not to mention non-existent finances. The excuse for planned escapism lies in the form of Jessie's upcoming birthday. The older Angela takes it upon herself to celebrate Jessie's special day with the ultimate gift--a chance to take a long weekend trip to enjoy the beach shore in Galveston while indulging in consuming donuts at will. But there is a catch...Angela has hastily paid for Jessie's birthday getaway to Galveston with their reserved rent money that is due in a few days. The girls simply compromise their dilemma by willing to work longer shifts at the diner in the days leading up to their departure for Jessie's birthday beach-bound destination.

The resourcefully off-kilter Never Goin' Back has a cynically charming yet blunt aura about its problematic protagonists. Both Mitchell and Morrone bring a caustic kookiness to their roles as the vulnerable teens in restrictive turmoil whose only golden ticket in life is the tranquility of a random beach miles away with powered junk food as their source of craved consumption. This all seems quite funny and sad in the same breath but Frizzell aptly punctuates Angela's and Jessie's situational malaise with low-key, slice-of-life rawness that practically is not demonstrated in ticklish teen comedies swimming in raucousness. Sure, the mentioning of penis and poop incidentals is par for the course but even these trivial devices for cheapened seedy laughs strangely reflect how genuinely bleak the tainted psyches are for the lost Lone Star State harried heroines bogged down in continual poverty and pugnaciousness.

Interestingly, girls behaving badly in the realm of slacker-induced mischievousness as they settle in the glow of blow definitely is a natural high for the roguishly crafted Never Goin' Back.