REVIEW: Mile 22 is a tedious and trivial hike into the realm of mindless, militaristic mayhem 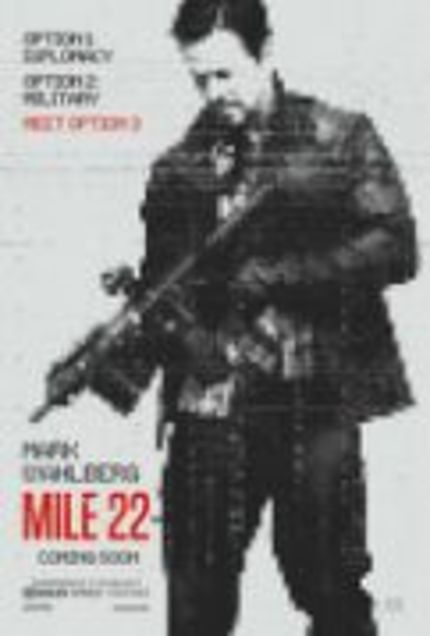 They say that war is hell. Nevertheless, hell takes on a different kind of connotation when watching the boisterous and banal wartime actioner Mile 22. Director Peter Berg ("Deepwater Horizon", "Patriots Day") reunites with his Lone Survivor leading man Mark Wahlberg as they collaborate on yet another hyperkinetic special operations actioner. Clearly, the tandem of Berg and Wahlberg get their caustic kicks from delivering trigger-happy, explosive action-thrillers that percolate and penetrate. However, the mindless Mile 22 is an overwrought, noisy, and numbing mess that aimlessly echoes exaggerated volumes of destruction just for the sake of conjuring up a crass and colorful spectacle. Sure, some will attest to ensuring that their lively actioners are ignited by frothy firepower, rapid-paced fight sequences and cliched yet robust doses of intrigue and mischievousness. Still, the overall problem with Mile 22's forceful foundation of riddled bullets, brutish bravado, and dumbfounded dialogue is that Berg's combative slog is utterly convoluted, incomprehensible and baseless.

Screenwriter Lea Carpenter toils at producing an intense battleground covert caper flavored with a sense of cohesive suspense, psychological fatigue or a semblance of balanced ideology and purpose. Instead, Mile 22 feels like a convenient vanity project for Wahlberg and company to point and shoot flashy weapons in another pointless paramilitary thriller thriving on empty-minded, high-octane hysteria. Berg wants to invoke something slick, stylish and subversive with this vacuous vehicle. The result, unfortunately, is nothing more than a self-servicing dish of swaggering, misguided machismo. Woefully strained, tediously choppy and aimless, Mile 22 is nothing more than sluggish summertime fare looking for some frivolous box office attention with its over-the-top throbbing theatrics.

Overwatch CIA agent Jimmy Silva (Wahlberg) is top dog in his secret agency of governmental intelligence. On the surface, Silva is a foul-mouthed, one-man wrecking crew who is rugged and reliable when the chaos is unimaginable and intense. Indeed, Silva is twisted and no-nonsense as a CIA operative out for blood and guts. Clearly, he has the qualifications as a leader of his squad known as the "Ground Branch". Silva is impervious to pain (he actually welcomes it to keep him honest and alert) and any menacing mission undertaken gets him as giddy as a patriotic assault rifle owner at a sponsored NRA picnic. Basically, Jimmy Silva is a badass black-ops specialist with a screw loose. So why is Silva so unhinged? His backstory: Jimmy Silva grew up the hard way as a neglected orphan with uncanny brilliance in the world of an extreme dim reality. Obviously, Silva's school of hard knocks upbringing makes him an ideal recruit for a fearless governmental enforcer of the highest caliber. Whatever.

In any event, Silva and his elite rag tag unit in the Overwatch division are supposed to be the gifted outcasts--a tumultuous team of American operatives seriously misunderstood individually and collectively. Roguish and raw, Silva and his cutthroat cohorts are assigned their latest tactical task: to help orchestrate an endangered informant to vacate his country under tremendous turmoil. Silva's crafty comrades include Alice Kerr (Lauren Cohan), Carlo Alban's William Douglas III and tough cookie Sam Snow (MMA/judoka and WWE wrestler-turned-actress Ronda Rousey). Together, they must handle an immediate counterterrorism threat that proves disastrous for the world at large. Specifically, an unpredictable nuclear substance that needs to be located and confiscated as soon as possible is the priority of the Overwatch movers-and-shakers.

Enter Li Noor (famed martial artist and stuntman Iko Uwais). Li Noor, a cop from Southeast Asia, struts into an American embassy with an interesting proposition in mind. Li Noor starts to negotiate the condition that if he is given asylum then he would assist in helping the team track down the aforementioned nuclear-activated materials. Thus, Li Noor's inclusion into the Ground Branch squad should increase the odds of this bombastic bunch taking care of business as they routinely bust chops en route to eradicating the corrosive baddies at large. The adversarial forces are out to contain Silva and his gun-ho unit but there are a melting pot of riff raff out to deflect, distract and destroy. Corruptible cops, gun-slinging bikers, Russian infiltraters--they are all in on the master plan to act on their sinister urges but not on Silva's watch if he has anything to do with controlling this potential worldwide disaster.

Mile 22 is the fourth collaborative action-packed pet project for Berg and Wahlberg. Sadly, this derivative demolition derby is all gore galore without any ounce of conviction. Clearly, this roughshot romp feels like a showy excuse for Wahlberg to channel in his Rambo-esque tendencies as he coughs up another trigger-and-disfigure actioner offering synthetic thrills. The copious displays of over-extended bloodshed and gunplay are rather exhausting and tedious. The barrage of action sequences come off looking quite stagey and labored.  The transparent characterizations show about as much edginess and sharpness as a kitten butterknife. Wahlberg's Jimmy Silva is reduced to acting like an avenging blue-collar idiot savant with a twitchy trigger finger but his quirk-like complexity shtick feels more like an invented gimmick than anything else.

Amazingly, Mile 22 does not make any distinctive usage of real-life action figures Rousey and Uwais. Rousey makes her film debut and one would think that the movie handlers would play up her physicality in this overgrown shooting arcade flick. As for Uwais, a golden opportunity was certainly missed to have this renowned Asian butt-kicker "do his thing" with fists of fury in an American action-packed motion picture primed for his skill set. Uwais should have been handed the juicy meat but instead was given a bone in a couple of selected excitable bits. Plus, the great screen vet John Malcovich is on board playing Overwatch head of operations Bishop which does not give much for the heralded performer to do.

Do you feel this content is inappropriate or infringes upon your rights? Click here to report it, or see our DMCA policy.
command teamMark WahlbergMile 22Peter BergRonda Rousey