Lima 2018 Review: Father And Son Bond Over One HUNTING SEASON 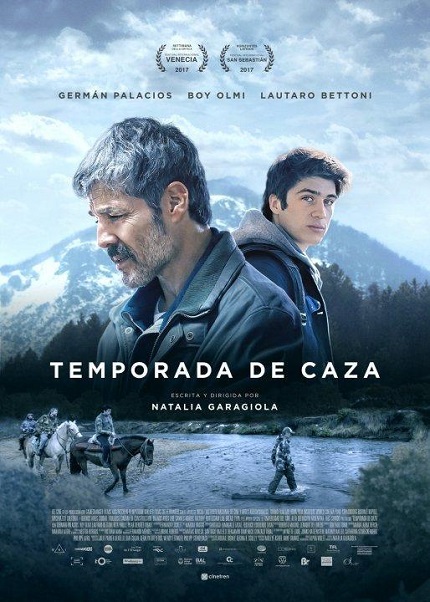 Despondent and lashing out after the recent death of his mother, teenager Nahuel (Lautaro Bettoni) is sent to stay for a while with his estranged biological father, Ernesto (Germán Palacios), who lives and works as a hunting guide in the Patagonia Region with a whole new family. It’s here where the two men will get to know each other and hopefully find some common ground.

By now you’re probably thinking that Hunting Season (Temporada de Caza) sounds awfully familiar, and you’re not wrong; father-and-son-bonding stories have been told in movies time and time again. But it’s the details that matter, and first-time filmmaker/writer Natalia Garagiola gets a lot of them right, starting with her picturesque setting.

The gorgeously photographed Patagonian wilderness is the type of place that hardens men, and Ernesto is the perfect example: a rough, tight-lipped outdoorsman who dispenses tough love and is one step away from living completely off the grid. With his surly attitude, the angry Nahuel is a perfect fit for the place and a mirror image of his father, whether he wants to admit it or not.

Ernesto and Nahuel embody masculine archetypes, the ones that see talking about one’s feelings as a weakness (see Nahuel’s kindly stepfather Bautista, played by Boy Olmi, who at one point shows up and is immediately intimidated by his surroundings). Garagiola ably subverts these types as these two roughnecks – virtual strangers at the start – gradually open up to each other, in their own way.

Olmi isn’t the only supporting actor here, but this is essentially a two-man show; Ernesto’s new family – wife and daughters – are ultimately left on the sidelines as the two men develop their own relationship, with both Palacios and Bettoni delivering understated, solid performances.  Garagiola has a clear eye for exploring masculinity and its different bonds, from the father-son relationship to the hunting trips with Ernesto’s buddies, a ritual with its own codes and traditions. It’s in these outings where Nahuel, for all his tough talk, begins to lower his defenses.

Avoiding even a whiff of schmaltz – these characters are too hardened for that – Garagiola builds towards a climax that deftly skips the feel-good sentiment your typical Hollywood film would take for granted. It’s not neatly wrapped up in a bow, but in its low-key way, it shows some hope that things will get better. On the surface, Hunting Season is a typical father-son drama, but it’s the details that make it stand out from others of its ilk.

The Lima Film Festival is currently underway until 11 August.

Do you feel this content is inappropriate or infringes upon your rights? Click here to report it, or see our DMCA policy.
German PalaciosHunting SeasonLautaro BettoniLima Film FestivalNatalia GaragiolaTemporada de Caza